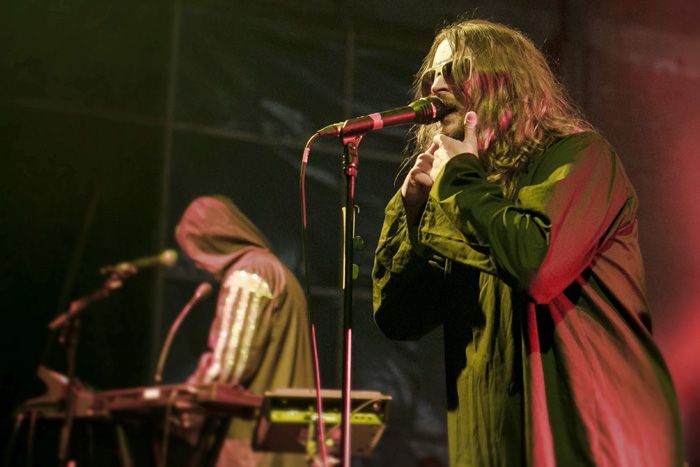 Dave McCabe and the Ramifications at Sound City 2015

Back in business with his new band the Ramifications, Getintothis’ Jamie Carragher caught up with Dave McCabe ahead of the release of his new album, Church of Miami.

There haven’t been many records released with Dave McCabe‘s name on them for the last six years or so. Following The Zutons (relatively quiet) split, he’s kept writing songs for the likes of Mark Ronson, which is no surprise given the uber hit that Ronson and Amy Winehouse had with the Zutons hit Valerie.

Finally, he is ready with his new project, Dave McCabe & The Ramifications and their debut album Church of Miami. Those paying attention around Merseyside may have stumbled across one of the band’s live performances, and will therefore be aware of McCabe‘s new approach.

We caught up with him ahead of the album’s release…

McCabe: Yeah, I’m excited. It’s very stop-start at the moment. It hasn’t really kicked in yet that there’s an album coming out.

Getintothis: It’s been a long time in the making.

McCabe: Yeah ’cause it had to be right, there was no pressure on it. It’s not like the world was waiting for a Dave McCabe album so you may as well make it as good as you can make it rather than rushing something out.

Getintothis: The album’s a new direction for you. It’s very electronic.

McCabe: Yeah, it isn’t to me like. I mean, I know it is. But I’ve heard it so many fucking times now, it just sounds like the next natural step for me. I know everything that’s on it, I know the guitars, I wrote the songs in the house on a guitar. To me it’s just a canvas and you just let them [producers, Viktor Voltage and Mr. Chop] manipulate the sound. But I like that about it. I played a few things on it, but the majority of the synthesising and the programming, I didn’t really do. I found with this record, you’re giving your babies up basically and you’re letting someone else have a go. I think you’ve got to do that, and if you don’t let people do that you’re never going to move on. You’ll probably go back to a four piece band with a fucking saxophone break in the middle of it, but that’s not what I wanted because I’ve done that already. Nothing against The Zutons, like.

Getintothis: So it’s a new way of working for you.

That’s why I think it took a while to do. We had about 6 songs we actually liked. I went away and wrote more and found more. I’ve got loads of songs on my laptop that have just mounted up. To go through them, obviously, most of them aren’t great. I’m not gonna lie. There’s only so many times you can go ‘Fucking hell…’ And then one will just jump out at ya.

Getintothis: You’re very much known as a man with a guitar in his hand but this new album might change all that.

McCabe: When I was younger, I’d have Kraftwerk and Depeche Mode and Human League and all that on in the background, when I was a kid in the 80s. And then even growing up in the early 90s. And that’s kind of why I went with Nirvana and Guns N’ Roses and all that, because I’d been blitzed when I  was a kid. Now as I’ve got older, I’ve started going back towards that. And I’ve always liked Beck or Beastie Boys, that thing of mixing everything together, all the best bits from all the decades of good music.

Towards the end it just started sounding really electronic so we went with it because it had continuity for the record.

Getintothis: You haven’t just put out the first thing that came into your head.

McCabe: No. I wanted to challenge myself really. I couldn’t be arsed just making a safe record. It’s not safe if you just do the same thing. I think it’s probably dead boring, you’re not really opening anything up, you’re not exciting yourself so nobody else is going to give a shit about it.

I actually like this album a lot more than the album I made before it, which was probably 7 years ago. I actually enjoyed making this record and I’ve enjoyed playing it and I’m shitting myself when playing certain gigs, ’cause I don’t know what to do on the stage so I’ve got to find out what it is I am.

Getintothis: It gives you a lot more freedom on stage and it’s like, what do you do with that freedom?

Getintothis: You haven’t had a bedding in period.

McCabe: Not at all. I’m loving it though.

Getintothis: How was Sound City?

McCabe: That gig for me was a fucking nightmare. They always are Liverpool gigs. You see your Nan in the crowd, you see your uncles.

Getintothis: You need to get out your living room.

McCabe: Yeah, it makes you get dead self-conscious. Your Mum and Dad in the crowd, nothing to do with Liverpool. In your living room, in a gig.

Getintothis: But you’ve got your club run in October?

McCabe: I’m looking forward to it, loads. The more gigs we play, the better we become as a band. The more natural it feels.

Getintothis: Speaking of the band, who are the Ramifications?

McCabe: The Ramifications are: Chris Taylor, guitar, dancing. I say dancing because that’s what he does. Ray Durie, keyboards, bass. Scott Jones, keyboards, singing. Carl Povey on the drums.

Getintothis: You played the Kazimier the other week, which is shutting down next year. Thoughts on the closure?

McCabe: It’s shit like. What are they gonna do? Find another place and make that into apartments? They’re just knocking it down so they can claim council tax. I’m not happy that it’s being shut down. I’m happy that we got to play it but we should be able to play it again and again. It’s got loads of character, the Kazimier. It feels different, smells different.

The Kazimier represents everything’s that wrong with the world at the moment. Trying to milk the most out of it. Years ago before the Capital of Culture, that wouldn’t have happened. There’s a lot of people with big money moving to Liverpool to make money.

Getintothis: The Kaz’s downfall fits into the themes of the album. How modern life and progress isn’t necessarily a better situation or improving things.

McCabe: Yeah it does: everyone’s dying! To be honest, when you’re making the album, it’s hard to know what the fuck it’s about half the time, because you’re in it.

Getintothis: And the single, Church of Miami, is about how superficial modern life can be-

McCabe: It’s about cosmetic surgery and religion. Miami represents everything from cocaine to false buildings getting built, wiping out everything that’s real.

It was a piss-take to be honest. It’s all a piss-take. But it’s turned out bang-on. I don’t know where it’s came from. It wasn’t just me. I wrote it with Joe Fearon and Mr. Chop. To me though, when I hear it, I think GTA and Scarface.

Getintothis: It’s a concept album too. There’s a storyline going through it.

McCabe: Yeah, it’s about a fella who’s lonely, who robs a robot from work. He soon realises that he is lonely -he doesn’t know it at the start- and he realises that he needs real mates. It’s about technology getting ahead of spirituality and humanity, and you can’t replace that, no matter how  good a screen is or how fast your computer is. We’re all guilty of it. I’ve got a phone in my pocket, I was on it before you came.

If you were to write something after this album it would be about trans-humanism, where technology and people become one thing. That’s where the world’s going.

McCabe: Yeah, the glass-holes. Have you got some?

Getintothis: No. [Shh, not now, Siri] But you can imagine in ten-years everyone having them.

McCabe: It’s like mobile phones in school. One lad had a mobile and it was like ‘Wall-Street’ and we all took the piss out of him. Now we’ve all got one.

Getintothis: We all know we shouldn’t be on them all the time but still…You’d have to go to a country-retreat and go cold-turkey-

Getintothis: Let’s finish on an important question. Where did you get this costume from?

McCabe: I just came up with it with my mate. It’s off a washing machine.

McCabe: One of my mates thought I’d made it with a slinky.

Getintothis: It looks dead techno and then you realise, hang on, it’s a washing machine.

McCabe:  I was going for Space Age Blackadder. You’ve got to play to your strengths.

Dave McCabe and the Ramifications will be performing and signing copies of their album Church of Miami this Saturday, September 5, at HMV Liverpool One from 5pm.