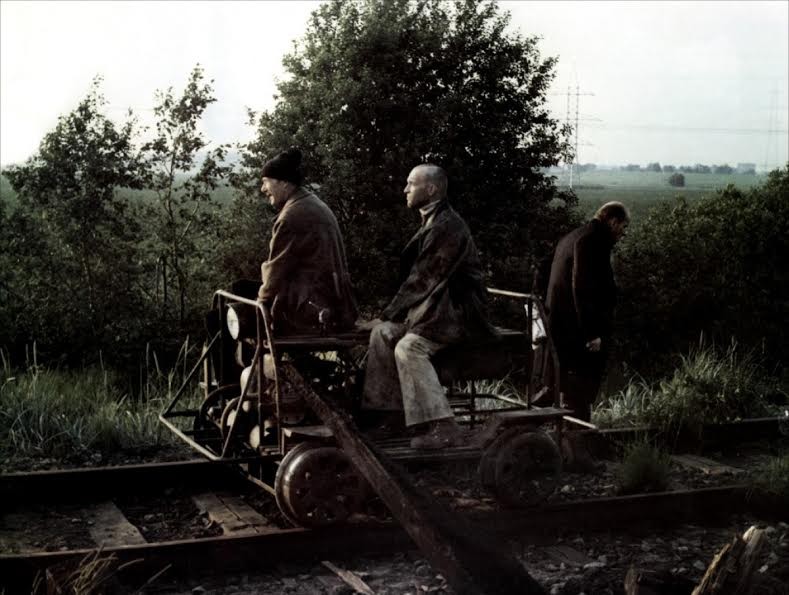 In the latest instalment of his monthly film column, Getintothis’ Adam Scovell explores the cinematic ambience in Andrei Tarkovsky’s Stalker.

The language of popular cinema changed dramatically in the 1980s. The coming of MTV and the prevalence of music video editing has left a stark and continuing mark on cinema; more so than ever, speed is everything. The hyper-kinetic nature of popular cinema currently has such a high average pace of delirium that making a film that takes its time, that slows things down to the point of a pure ambience, can now be seen as a far more rebellious act. It seems fitting then that the height of this cinematic ambience, sometimes labelled under the flawed title of “slow cinema”, came only two years before MTV launched, in the form of Andrei Tarkovsky’s 1979 film, Stalker.

Stalker is a film steeped in history and meaning, so much so that writing about it at short length is difficult. The film is based on the Strugatsky Brothers’ novel Roadside Picnic and is a poetic dystopian travelogue about a journey to a forbidden, sentient place called The Zone where there supposedly lies a room in which all of one’s deepest wishes can come true. The powers have apparently been caused by a fallen meteor and the film follows a writer and a scientist who require the help of “a stalker” to get them into The Zone in order to find The Room.  Whilst this narrative is clear, Tarkovsky is not a filmmaker who relies on the rigid structure of narratives so the film is built almost entirely upon cinematic language and gesture rather than explicit ties to this story.

Such a reliance on the very raw material of the medium means that there is much scope for creating ambience and it is here where interest in the film’s sound and music begin to reap rewards. Stalker is far more than a cinematic experience but more akin to a religious one; where every sound and visual falls together to create an expression of something Other and outside of the realm full representational recreation. The film’s soundscape is of immense importance in creating this sense of duality, where a nuanced use of sound and of music guides the viewer to confront the inner depth of the film’s real subjects: that of desire, of free will and of power.

Tarkovsky had honed his cinematic style by the time he began making Stalker. The use of extremely specific, natural sound had become an oft-used trait in his films such as Ivan’s Childhood (1962), Solaris (1972) and Mirror (1975). In Stalker, however, the sound has a much greater role to play, if only because the narrative calls upon the film’s aesthetics to be heightened as the very landscape and setting of the film (which is ubiquitous either visually or thematically) is surrounding all the urges and desires of the characters on screen. To mark this, Tarkovsky films outside of The Zone in sepia, only moving into a beautiful level of Ektachrome colour when the three characters finally enter The Zone. From here on in, sound becomes a fourth voice in the film; where the breeze on the reeds or the dripping of water can easily be read as evidence of the place’s sentience, perhaps even its malevolence towards outsiders and intruders. It is, after all, presented as unknowingly dangerous from the very beginning of the film.

The key theme in any form of ambient art is some notion of extension creating a surface simplicity that hides a more complex undercurrent. Tarkovsky’s style of filmmaking is the epitome of this ideal, having long, slow shots and taking great care to emphasise the detail of this strange edge-land which feels almost captured in real-time.  Even the film’s dream sequences are set around the semi-rural normality of The Zone rather than the more obvious surreal material more readily associated with oneiric content. The visual of a dog constantly haunts the stalker and the dreams give greater excuse for natural sound as they largely consist of long tracks through the debris and overgrowth of the natural landscape accompanied with various drips and breezes which meander through the rusted walls and wreckage.

With this emphasis on sound, it’s not difficult to imagine the position that the film’s composer, Edward Artemiev, was left in (and this was also having fragmented forms of music by Ravel to contend with too). It was his last collaboration with the director, the two falling out after the film was finished. The film’s production was already problematic with Tarkovsky shooting most of it on a risky stock of celluloid, meaning he effectively had to shoot the film twice. No doubt Artemiev was grateful for the extended time to consider the music though his style of composition was already experimenting with creating that same sense of ambience and parallelism with natural sound to begin with. Artemiev is one of the pioneers of Russian electronic music and Stalker is one of the two films for Tarkovsky where he explicitly explored the use of synthesisers; specially in this case the Synthi 100 having moved on from work with the ANS synthesiser for Solaris.

With The Room being such a fantastical conception, it’s surprising to find Artemiev’s most obviously “composed” piece of music used outside of The Room and more readily in moments within the natural elements of The Zone. His piece, Meditation, is the final artefact of evidence as to what lies underneath Stalker‘s surface aesthetics; more than simply a layered narrative, the film has an infinite and unanswerable questioning of what it is to be alive, flawed and human. As the viewer explores this strange realm, the soundscape has the ability to enrapture and recreate the derelict beauty of The Zone to a surprisingly accurate and overwhelming degree while somehow still managing to convey such questions.

Because of this it is without doubt one of the most moving and haunting experiences conceived of any art made in the last century.