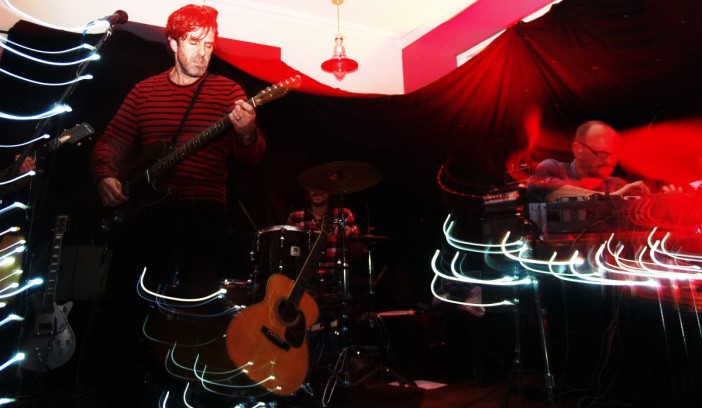 It is not often that a band plays their debut gig ten years after the release of their first album, but Getintothis’ Ian Salmon hopes this is the beginning of something special.

Is it wrong to start a review of a gig with somebody else’s lyric? Possibly. Regardless, Getintothis is going there: “I’ve got too much energy to switch off my mind but not enough to get myself organised. My heart is heavy, my head is confused and my aching little soul has started burning blue.”

It’s Matt Johnson, it’s The The, it’s from 1986’s magnificent Infected and we’re mentioning it here as Pete Wilkinson is spitting that lyric out over the end of his own Don’t Trust You Man, its original – nearly ten year old – dream pop given added muscularity during Aviator’s live debut as it rolls its way out on a gorgeously psychedelic groove.

It may seem odd that we’re talking about the live debut of a ‘band’ who put out their first album nearly a decade ago, and whose founder and prime mover has been a notable figure for a decade longer, but that’s where we are. Aviator. First ever actual gig. Upstairs at The Bridewell, which hides in the back streets near Liverpool One and makes itself all the more special for the fact that you can actually find it. Upstairs, packed, very, very hot and absolutely buzzing. This is something.

You know Pete Wilkinson, you all know who we’re talking about here; you’re sharp, you’re cool, you know your stuff. But, just in case: Pete, bassist with Cast, with Shack, with The Bunnymen, with Michael Head and the Red Elastic Band. Guitarist with The Hours. You may not have known that last bit. This writer didn’t. He was though.

This is the reason for the opening quote coming from somewhere else, this is why Pete’s quoting of it is vital. His influences are massive, the moments that he can pull together and turn into something else are many and varied (and we’ll get to the Neil Young moment in a minute). Put simply, he knows his stuff and he’s bloody good at what he does.

Aviator has been Pete’s side project for nearly a decade now, something to sit alongside the day jobs. After tonight, there’s a very definite possibility that everything else will be the side project; Aviator can and quite definitely bloody should become the day job.

Playing in support of the damn fine new album, No Friend Of Mind, the Aviator that we see here – glimpsed briefly through and over the heads of those massed in the small room and buzzing, absolutely buzzing – is a four piece: Pete on guitar, Paul Hemmings of the Viper label and ex-La on stunningly dreamy psych-pop lead guitar, Simon Findlay on drums and Pete’s main conspirator on the album, Mark Neary, on bass and something that might have been a keyboard or might have been a pedal steel or might have been something new and unique but sounded incredible. It’s a four piece and it sounds more; sounds huge, sounds epic, sounds like you want a band to sound. If you’ve got any taste that is.

The set moves between the new album and the Huxley Pig debut, splits between/combines the dreamy jangly pop and the fuzzed out groove. From Desolation Peaks’ Revolver-esque vibe through to No Friend Of Mind’s perfect power pop, everything is rammed with melody, decorated with invention. There’s the short sharp song sensibility and the opening up, and there’s the flowing with the tune, letting the back beat take you over and see where you go and it’s all impeccable.

…and then there’s the Neil Young moment. That’s the moment the band glides into another groove (and we know that word keeps getting used but there’s a reason for that, we can’t emphasise that facet anywhere near enough to do it justice). It sounds familiar and it’s nagging at the edge of your mind and you get as far as the end of the first verse before you think “Mr Soul, they’re playing Mr Soul”, and you realise that they’ve taken apart the Buffalo Springfield classic and slowed it and taken it somewhere else, somewhere Neil Young and the lads never envisaged. They’ve taken a Neil Young tune and -whisper it quietly – they may have just improved it.

That’s the kind of night it is; the kind of night where a band takes something recognisable and classic and twists it – improves it and makes it sound their own. They throw in a quote from an album that’s nearly thirty years old to a room had forgotten how much they loved it, inspiring – pretty much as one – ‘oh yeah, that’. And those moments aren’t even the best bits because the rest is simply so sodding stunning. 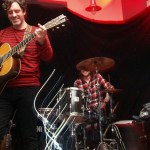 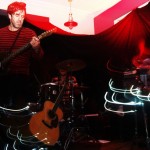 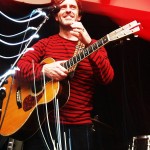