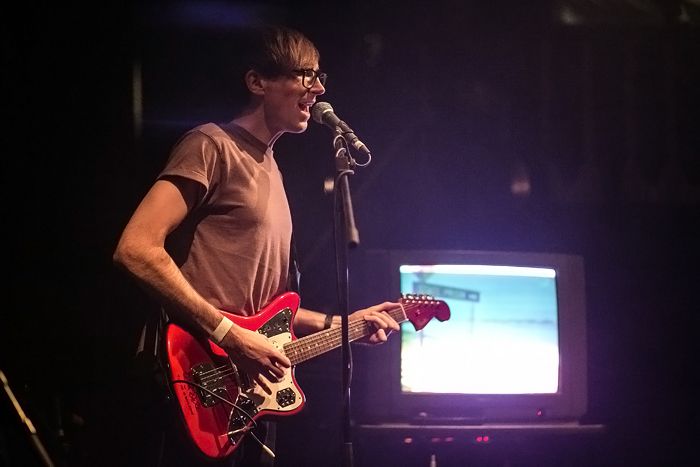 With TVAM’s latest single already sold out, Getintothis’ Will Neville tunes in to find out what all the fuss is about.

TVAM is the alter ego of Wiganer Joe Oxley, who looks like one of The Feelies crossed with Jarvis Cocker and Thurston Moore. Quite a musical melange to live up to, and while he sounds very little like any of them, his music matches their sense of adventure.

On stage, he is as visual as the music is interesting to listen to, with a big TV set showing often distorted VHS images in sync with the music, featuring such stand-bys as crash test dummies, spacecraft and aliens. The globular band logo remains in the corner of the screen, rather like a TV channel ident.

He claims Suicide as an influence, which is certainly setting himself up for a fall if he can’t live up to their extremes, but somehow he manages it, despite just being one man, a guitar, VHS player and a wheel-on TV set.

Porsche Majeure was released as a limited edition of 100 lathe-cut clear vinyl 7” by the wonderfully-named Static Caravan Records in October of this year, and is inevitably already sold out, with punters clearly forgiving him for the title’s ouch-inducing pun.

Its lyrics are hard to decipher, but are apparently taken from advertising slogans. The B-side is the pulsing We Like Fires, whose video was recently premiered by Bido Lito!, all over-exposure and fuzzy distortion.

He is clearly comfortable being at the heart of the current psych scene, having recently supported the likes of Moon Duo, Slug, The Coral’s Ian Skelly and Loop. He is also a member of 60-s-inspired garage punks The Shook-Ups! whose debut album Bad Reception was released in October 2012.

You can catch TVAM next supporting indie popsters Hatcham Social at Fuel in Withington on November 20, and at Gullivers in Manchester on Tuesday 24 while The Shook-Ups! can be seen at Docherty’s in Wigan on December 13.