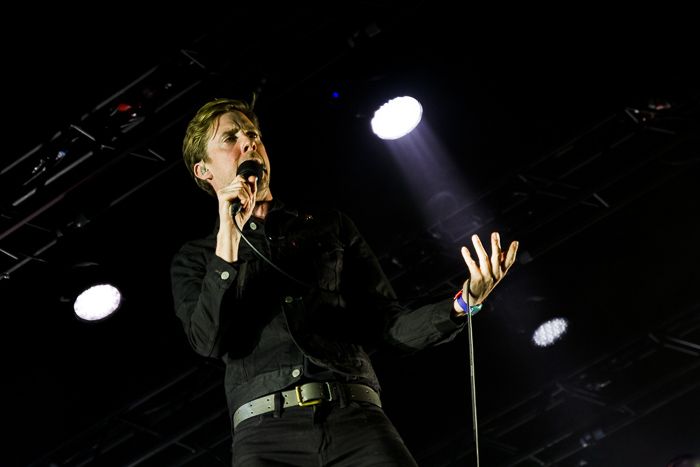 Kaiser Chiefs were ready to riot as they kicked off their tour in Liverpool and Getintothis’ Steph Niciu was there to see it happen.

Before we got our teeth into the Chiefs’ main event, there was support from the London-based duo Public Service Broadcasting. J. Willgoose, Esq and Wrigglesworth have been creating a huge buzz with their music over the past few years, providing tracks with samples of public information material, archive footage and wartime propaganda films -producing something both inventive and refreshing.

The duo came on with two TVs accompanying them, playing the footage while they got on with the music. Their debut album Inform-Educate-Entertain contains tracks that infuse a variety of sounds including rock, electronica and dance-punk seamlessly. Night Mail was a song that added an edge to the 1936 mail train documentary, based on W.H. Auden‘s famous poem.

Spitfire had us instantly hooked and yearning for more. Everest was delightful. Drums, guitar, electronica and a flourish of trumpets made us feel hopeful, in turmoil and victorious all at the same time.

Yet, the conceptual element of Public Service Broadcasting was not as prominent as it could have been. Two tiny TVs weren’t enough for an arena. We wanted a bigger screen so that the visuals and music could be appreciated in tandem – rather than having to focus on either one thing or the other.

By the end of the set, Public Service Broadcasting had won us over with their music and intrigued us with their wonderful sense of mystery, as they used a taped voice to interact with the crowd.

Kaiser Chiefs frontman Ricky Wilson emerged out of a thick cloud of smoke as the band kicked off their UK tour to promote their fifth album, Education, Education, Education & War. The album reached number one – mainly helped by Wilson’s slot as a coach on The Voice – and was produced by Ben H. Allen III who has previously worked with the likes of Deerhunter and Animal Collective.

Wilson looked ready to riot. He was hyped. And he, along with his bandmates, made it his mission throughout the night to get the crowd to feel the same way.

The Factory Gates got us started. This was something that Wilson was clearly excited about but it was met with a lukewarm reaction, as were many of the other songs that were performed from the new album, such as Roses and My Life. Of course, this is the first record since the departure of drummer and lead songwriter, Nick Hodgson.

Hodgson helped craft Kaiser Chiefs’ biggest hits and his absence on this record shows. While Wilson was enthused by these tracks, the crowd were not too fussed, simply because they don’t have the fizz and spark that makes Kaiser Chiefs songs like I Predict a Riot, Ruby and Oh My God so great. Those songs are loud, commanding and unlike most of these new offerings they don’t lack depth.

In a live setting, the newer stuff just didn’t manage to get us going in quite the same way. The oldies however were adored by the crowd – with the help of Andrew White, who provided us with some epic guitar solos and riffs.

Sadly the atmosphere of the gig was not something that was able to be maintained throughout. Instead, we had spurts of energy with Wilson doing what he could to keep us entertained, running into the crowd and performing on a trampoline-like podium with a camera attached to his microphone.

However, this just resulted in him looking weird and creepy as he tried to sing and get the crowd in shot at the same time. There was even a camera suspended above the stage as Wilson seemed intent on capturing the action. 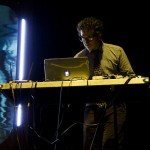 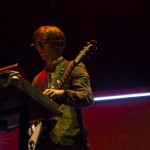 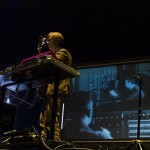 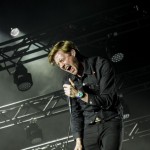 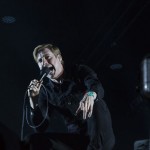 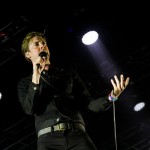