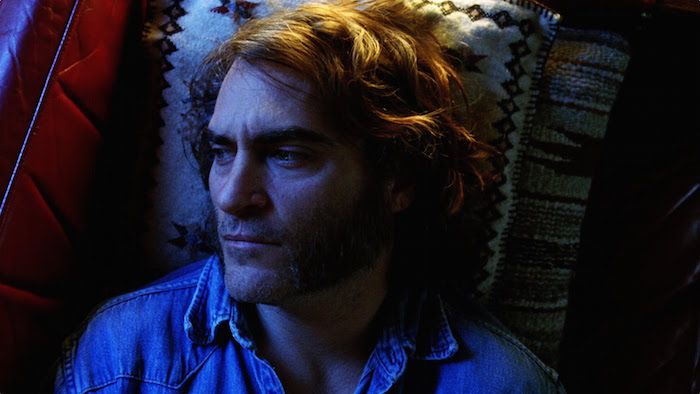 The first few of frames of Paul Thomas Anderson’s much awaited adaptation of Thomas Pynchon’s counterculture neo noir novel, Inherent Vice, felt like a refreshing release and escape. Before the film had started, the usual slots of adverts for cars and trailers for upcoming films flowed past, all fast, frantic and on a large scale. In fact, it was very difficult to actually tell the difference between the adverts and the clips from the films themselves; a blur of corporate fodder taking pride in showing off the cogs of commerce.  Then Inherent Vice started.

The gloss was gone, the hazy sunlight of the shot of California in the 1970s reacting through the chemicals of the celluloid, providing the warm, gentle flicker typical of an image shot on film. In this aspect alone, Inherent Vice naturally stands out from the crowd of digital blurs that preceded it; the process naturally imbuing the film with a human quality, unafraid of natural imperfection. In spite of this being a passionate and almost ideological practice of Anderson’s, Inherent Vice is simply made to be shot on film. The colours of its lighting and its narrative set in the low wave days of California post-Manson have a faded but subtle quality that work in tandem, reflecting a melancholic air of tension in between the palm trees and boulevards.

The film follows a stoned, washed up private eye, Larry “Doc” Sportello (Joaquin Phoenix), as he is plunged into the mystery of a disappeared property developer (and LSD converted white supremacist) Michael Wolfmann (Eric Roberts). Alongside the connected disappearance of his ex lover, Shasta (Katherine Watson) – the person who initially hires Doc – the PI is driven down into the underworld of global heroin smuggling operations, aggressive cops and political snitches.

There’ll be a number of genre terms trotted out throughout any number of reviews of Inherent Vice, though the somewhat contradictory main description of the film will centre around its dalliances with the term “noir”.  However, it would be wrong to saddle the film within more typical noir territory, if only because of its visual palette and period setting.  Instead, Anderson (and to an extent Pynchon) are tapping into that new wave of noir that emerged during the very late 1960s; films where sharp talking, suited men and glamorous femme fatales were replaced with something more grounded, hazed and with dark circles under its eyes.

Think of Robert Altman’s adaptation of Raymond Chandler’s The Long Goodbye (1973), with its bumbling Marlowe (Elliott Gould) stumbling through the mysteries of the stoned streets of the dying hippy dream. Or perhaps even more surreally, of Paul Bogart’s Marlowe (1969) with James Garner’s title character again at odds with the tripping, free loving customers he has to deal with. Inherent Vice is a natural evolution from these films and is perhaps in some respects even a homage to them. This was after all a movement that eventually produced such influential classics as Klute (1971), and Night Moves (1975).  It is, however, also very much its own film.

The sheer amount of elements and themes brought into the mix make it difficult to critique in short form; it is more deserving of several essays.  It does ask some strong, clear-cut questions though.  The first and most obvious is the question of power and who really wields it. The paranoia surrounding this is linked heavily with the drug-use of a huge number of characters on screen but also presented to the viewer as a knowing, pre-Watergate prelude. Whilst used to increase the tension in several scenes (especially when the members of the white supremacist biker gang are present with faces adorned with swastika tattoos), it also builds as a vehicle for the film’s comedy.  In the most memorable comedic moment, Doc and three others are stopped whilst driving (high on cocaine) by a cop. According to the policeman, any group of three or more people is now classed as “a cult”, again hinting at Manson Family worries. The absurdity of Doc’s life, along with his blasé and befuddled reaction to it all makes a long running time fly by quickly and cleanly with ease.

Inherent Vice also questions the role of the police and, in spite of being set in 1970, still has some rather stark questions about how violent they can really be. As someone with long hair and sandals, Doc’s visits to the station are often accompanied by side-glances and whispers of the more clean-cut officers, occasionally erupting into some form of physical assault (for example, when Doc’s pushed over in the most secondary school of ways by two officers). The hypocritical nature of such a force is an unspoken but constantly implied thematic voice, from Reese Witherspoon’s straight-edged deputy D.A. coming to see Doc to smoke weed and sleep with him in secret, to Josh Brolin’s square-headed tough guy Detective who literally eats all of Doc’s weed after breaking down his door in a cathartic rage after the case is solved.

The real essence of Inherent Vice and why it should be seen is difficult to surmise. It could be just the sheer joy from Jonny Greenwood’s score, the array of excellent performances, the complex, layered script, the light and grain of the flickering image of waves and sandy roads, or any number of elements.  But, like several of Anderson’s other films, there’s something else within the expertly packaged effort that can really only be experienced by watching the film itself. Unlike so much modern, big budget fare from Hollywood, Anderson understands cinema’s power to speak to higher emotions and concepts but through the most gripping and entertaining of means. He’s probably the best working filmmaker currently on Hollywood’s payroll.