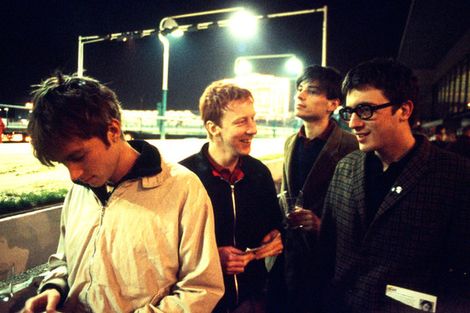 As Blur’s outrageous, emotional and era-defining album Parklife celebrates its 20th anniversary, Getintothis’ Jamie Bowman reflects on a record that has cemented itself alongside the pantheon of British greats.

Twenty years ago this week Radio One began playing a song that would become a gaudy yet glorious flagship for a scene that would transform British music.

Built around a scabrous guitar riff, a gurgling keyboard sound and the kind of bass line that had not been heard since Duran Duran’s Girls On Film, Blur’s Girls & Boys was described by one critic as “Black Lace meets Public Image” which if you’re looking for a neat summation of the two years which were to follow is pretty hard to beat.

One of these islands’ finest ever bands were about to enter their imperial phase. Less than a month after Girls & Boys crashed into the top ten, Nirvana’s Kurt Cobain committed suicide. His hideous demise had been played out publicly in the music press with a succession of cancelled gigs and overdoses and the contrast with Cobain’s inability to cope with his fame and status and the self confident sense of fun and vindication that seemed to be sweeping through the UK’s indie scene was stark to say the least.

Just a year previously, Blur’s frontman Damon Albarn had laid down his band’s new mission statement in no uncertain terms. “If punk was about getting rid of hippies,” he said, “then I’m getting rid of grunge.” Now, in the most horrible circumstances possible, he’d got his wish. At the end of April, Girls & Boys’ attendant album Parklife entered the album charts at number one. It would remain there or there abouts for the next 90 weeks. Britpop was born.

Or was it? The keener indie fan had seen and heard something brewing for over a year or more. It was there in the charity shop glam romanticism of Suede, the pop-culture, dance-crossover of Saint Etienne and the jaded Bohemia of the Auteurs’ superb New Wave album. Others might point to Denim’s 70s revival show or the World of Twist’s kaleidoscopic Quality Street.

But it was Blur who coalesced both the sound, the look and the ethic on their March 1992 single Pop Scene and then again on the following year’s Modern Life Is Rubbish album.

That August Bank Holiday, I remember lying in the middle of a field in Reading, minus a shirt with steam coming off me as a concerned man from the St John’s Ambulance tried to revive my limp body after I’d fainted on a freezing Berkshire night following Blur’s triumphant second stage set at 1993’s festival.

Blur, surrounded by a set from a 1950s parlour room, played their gig of their lives that night as they ripped through the songs from Modern Life… while 80s dullards The The headlined the festival’s stage. “Everyone knew: this is it“, Albarn later reflected. “You know when the gig’s yours“. Drummer Dave Rowntree described the gig as “an hour-and-a-half-long orgasm“.

These days, it’s become common consensus to regard Modern Life… as little more than a staging post on the road to Britpop – the shandy to Parklife’s double vodka if you will – but that belies what a superb album it is.
Songs like Star Shaped, Chemical World, Sunday Sunday and the stunning For Tomorrow put meat on the bones of Albarn’s attempted riposte to grunge, while the otherworldly rush of melody and melancholy that is Blue Jeans showed the band were beginning to equal and even surpass the artists (Kinks, Bowie, Jam) that were influencing them.

Modern Life is not a perfect album, but it’s deep and ambitious and had a theme and a concept. You didn’t get this from the Senseless Things or Kingmaker.

And so to Parklife. Recorded quickly, as according to bassist Alex James, they were “skint“, the album benefited from Albarns’ restless ambition and hunger as Blur, full of the confidence that things were happening worked on their defining statement.

It’s always hard to talk about an album as era-defining as Parklife while trying to remove yourself from both its legacy and aftermath – in this case the patriotic fervour of Cool Britannia. But Parklife deserves much more than to be blamed for Wake Up Boo!, Chris Evans and Sean Maguire’s Good Day.

Kicking off with the soon-to-be ubiquitous Girls & Boys, Parklife soon unfolds itself as a dizzying and dazzling masterwork and the kind of pop-art concept album it would be impossible to write in these days of the iPod shuffle.

Tracy Jacks bounces its way into view as the epitome of Albarn’s skill at rediscovering the Ray Davis ‘character’ song. It’s a brilliant pop tune with a chorus so singalong it’s incredible to think it was not even a single. The near perfect balladry of End of the Century follows and it’s here where Albarn hits his stride as a songwriter with his adoption of an intimate and delicate first person narrative that would belie the album’s reputation as a knockabout lad-fest – see also Badhead and To The End whose refined strings showed just how far Blur had come since There’s No Other Way.

Alex James’ Far Out betrayed the fact the band were still the Syd Barret art punks of their early Seymour years while Bank Holiday confirmed they could still bounce drunkenly off the walls. A quick viewing of the commuter’s reactions to the recent tube strike shows the doom-laden metropolis of London Loves is still very much with us.
Even apparently minor tracks like Clover Over Dover display a confidence and tunefulness that is infectious. Driven by a harpsichord (a harpsichord!), Albarn’s morose lyrics about jumping off the White Cliffs show that not all was rosy in the Damon camp (he later he revealed he was plagued by panic attacks at the time of the album’s released).

With two decades distance, it’s ironic that it’s the album’s title track which is the only one to stick in the craw. What once seemed cheeky and ironic now seems annoying, formulaic and soulless – a knockabout paean played to death every time a clip of Sunday football plays on the TV. Still it was fun at the time.

Suitably for an album that flows and careers through a perfect track listing, things reach a climax with a song Blur and few of their contemporaries have ever come close to matching. This Is A Low was the last song to be completed for Parklife and had laid around as an atmospheric atmosphere before Albarn was forced to write a poetic lyric based on a handkerchief, given to him by Alex James, which featured a map of the UK’s shipping regions.

From that unlikely inspiration comes a swirling piece of magnificence as Albarn takes the metaphor of an approaching spell of low pressure as the take off point for an atmospheric epic on a troubled British Isles. The fact it’s followed by runaway instrumental Lot 105 which Graham Coxon described as like “Barbara Windsor coming along to take you up the arse” only makes it more special.

Parklife was and is a crowning achievement for a band who just three years previously were little more than baggy also-rans. Albarn’s masterful song-writing has never been bettered on a single collection while the band’s playing shows a band totally in sync with each other (even arch-wanker Alex James is crucially brilliant on a number of tracks).

At the time (I was 16) it was easy to lose yourself in the excitement of it all but with 20 years of distance it is clear that Parklife is so much more than simply a Britpop album. We can leave that sobriquet to the likes of Sleeper’s Pleased To Meet You, Echobelly’s On or Shed Seven’s A Maximum High while Parklife takes it’s rightful place among the likes of Revolver, The Queen Is Dead and Village Green Preservation Society. Yes, it’s that good.