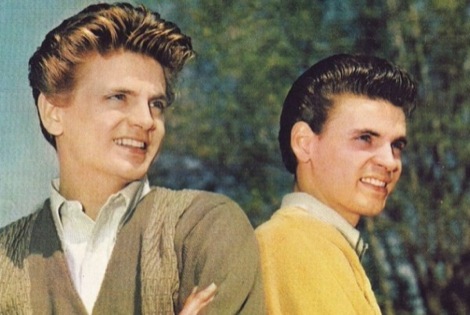 Phil Everly, one half of the Everly Brothers died on Friday January 3 aged 74, Getintothis’ Christan Slawinski reflects on their lasting influence which shaped the careers of everyone from The Beatles, Dylan and The Coral.

The Everly Brothers. Harmonic, hypnotic. Two voices so perfectly matched, Phil the slightly younger of the two taking the higher part, Don taking the lower but with neither backing the other.

Don augmented Phil’s melody as much as Phil augmented Don’s. Twin melodies, both worthy of leading a song on their own but together so much more. Like any of the greats, the Everly Brothers were quite simply unique. Two voices, one sound.

It’s during the winter months that I tend to reach for music that reminds me of home and growing up in Ormskirk (a small West Lancashire market town not far from Liverpool); and so it was perhaps timely that Phil Everly should leave this world having popped up on my iPod only 24 hours earlier on a cramped London tube ride to work. Together with his brother Don, Phil leaves behind an incredible body of work comprising of 21 studio albums and 75 singles and an influence on popular music that will never be forgotten. 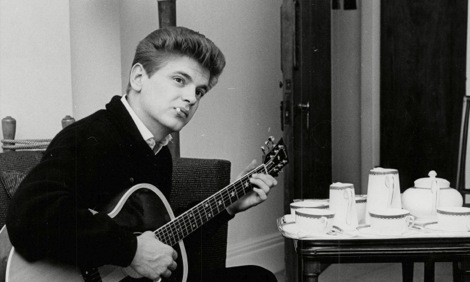 Phil and Don were destined to sing. It was in their DNA. Their father was a musician and had his own radio show and so it wasn’t long before the boys were performing regularly themselves. This led to their first deal arranged by a family friend, who was none other than the legendary Chet Atkins.

Their first record flopped but they persevered, signing a deal with Cadence Records in February 1957. The touchpaper was lit and they scored hit after hit on the US Billboard, and in the UK, with their first offering Bye Bye Love, written by Felice and Boudleaux Bryant, peaking at number two.

This early success was followed by Wake Up Little Susie, All I Have To Do Is Dream and Problems among countless others, which is more than most artists could hope to achieve in an entire career. And this was just the beginning of a hey-day that lasted up until the late sixties.

I could continue to recite to you the history of Phil and Don Everly but that would be to tie their music to a different age and a bygone era which would be a crime. I was lucky enough to grow up in a musical household where singing was encouraged, as was listening to the magic that had been passed down to us as kids on those odd looking, large black discs on the shelf.

The Everly Brothers cassettes were part of every car journey to Wolverhampton to see grandparents, and to the Lakes or Cornwall for a summer break. Phil and Don held their own next to Paul and John. Buddy Holly, Brian Wilson and Elvis too. Don’t let anyone kid you that they were out of place in such company.

Each would cite the Everlys as an influence with McCartney even helping to relaunch their career in the mid-eighties by writing a song for them entitled Wings Of A Nightingale. And so for me, a youngster entranced by melody and guitar, the Everly Brothers were a vital piece of the puzzle.

Listening to those records I was mesmerised as Phil soared and swooped while Don drove the damn thing. Take Devoted To You or Take A Message To Mary as examples of Phil really coming to the fore. Together they were picture perfect and they were pitch perfect.

They were every baby boomer’s dream, that is until The Beatles came along. Throughout the sixties the Everlys continued to record and perform, changing their approach to move with the times, at one point recruiting the Hollies as their backing group.

Personal favourites of mine lie on a rare vinyl entitled Beat & Soul from 1965 – thanks Mum and Dad. C.C. Rider (spelt See See on the disc) and Love Is Strange leave the melancholic behind and ride high on the upbeat wave that the Beatles and Stones had by then brought into the mix. The band behind them is beefier, a la Dylan around that period, but it’s still the same Phil and Don, pure, precise, playful and warm. A new beat perhaps, but the same soul. Unmistakable, inimitable.

Much of the seventies were occupied by a falling out of epic proportions and according to legend only speaking just the one time at their father’s funeral. Both had moderate success (by comparison) during that period performing solo. 1983 saw them reunite and I was fortunate enough myself to be taken along to the Liverpool Empire by my folks to see them perform in concert on 3 June 1989, although that night I recall being more interested in their long time guitarist, Albert Lee.

Of course, next day in school nobody had a clue as to who these Everlys were or what they sang. No doubt most primary school kids at that time, if in fact they could leave their football alone long enough to listen to music, were preoccupied with Jason Donovan, who was just about to knock a re-release of Ferry Across The Mersey off the top spot with his version of Sealed With A Kiss.

So where do the Everlys fit in today? Well, any young hopeful looking to explore the mystical tapestry that occurs when voices collide and caress should start with Phil and Don. No studio trickery, no computers, no auto tune, just magic.

The Beatles spent plenty of time studying them as Love Me Do and Please Please Me demonstrate – nice try, lads. More recently The Coral‘s singles collection featured a live version of Bye Bye Love. Need another random Everlys fact? Sweet Child Of Mine was written about Axl Rose‘s then girlfriend, none other than Don Everly’s daughter Erin.

Not so long ago my band played a London gig where one of the other acts covered When Will I Be Loved, which is perhaps my all time favourite. I went up to the singer afterwards and thanked him for giving me a moment that took me back to those great long car journeys and I was met with his great surprise that someone should know the artists, let alone the track. It was great to hear that the legacy continues, and it will do so as long as musicians and music fans continue to appreciate harmony. That’s how Phil and Don started and harmony is exactly what they became.

So if now is the time for New Year’s resolutions then make yours to listen to the Everly Brothers. Take a moment to appreciate exactly what they achieved nearly 60 years ago, and let those voices do the rest.
That sibling sound is what they had, and the magic is there to be discovered in the music. So what are you waiting for? RIP Phil Everly, gone but never forgotten.