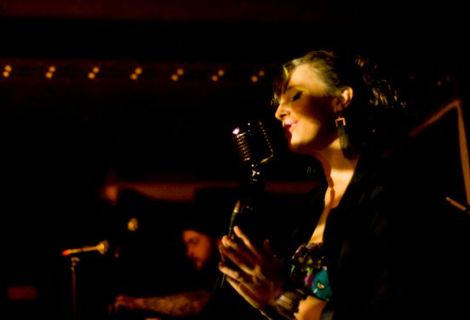 Submotion Orchestra surfaced at the Kazimier and caused an almighty scene, Getintothis’ Edward Black nodded and bopped along with the rest of them.

Leeds-bred dubby multi-instrumentalists Submotion Orchestra kicked off their UK tour at the Kazimier, supported by upcoming Liverpudlian beat machine GhostChant.
With all the various mixing and recording softwares so readily available nowadays, it seems that every Jack and Jill considers themselves a producer/DJ – so we got ourselves to the Kaz bright and early to see if GhostChant could set himself apart from the rest.
With the crowd still trickling in, GhostChant took to the stage, starting his set with some low, crackly Burial-esque rumblings. As delay-ridden piano softly began sweeping in, GhostChant nervously donned his guitar providing another texture to the already-building soundscape now filling the venue.
Eventually a housey, slowed-down garage beat drops, signalling GhostChant’s true arrival, and heads begin nervously nodding. The set continued in a similar spacious, downtempo manner, with each song seamlessly flowing into the next.
Instrumental music has to be especially engaging to keep the listener interested, a feat which GhostChant didn’t quite reach tonight – a couple of the tracks were crying out for a vocal line.
However, this cry was answered towards the end of the set as GhostChant was joined by a vocalist and trumpet player, the closing track performed by the three undeniably the best of the set.
By now the Kazimier had filled up nicely, just in time for five sixths of Submotion Orchestra to take to the stage. They kicked off with the haunting Backchat, from their first album Finest Hour, before being joined by vocalist Ruby Wood for a rendition of Blind Spot thus completing the lineup.
Having been hooked on Submotion Orchestra since hearing their immaculate 2010 EP Submotion, but only having ever seen them perform at festivals, we were keen to watch how the 6-piece would translate in a more intimate setting.
As it happens, they translated extremely well; their unique blend of jazz and dub accompanied by Wood’s sometimes-haunting always flawless vocal providing the ideal accompaniment to a Tuesday night in at the Kazimier.
They flowed through a strong set consisting of a mix of material from both of their albums, Finest Hour and Fragments, and tracks from their recently released EP, 1968.
The songs from the three releases don’t vary that much in style from each other, but when the level of musicianship in the band is this high, and when the grooves are this addictive, that doesn’t really matter.
The Yorkshire-based six-piece closed the opening night of their UK tour on the beautiful title track from Finest Hour, and by this time the whole of the venue was bopping along energetically along to the bass-driven grooves.
The roars of the crowd were so rapturous that Submotion returned to the stage for two more tracks, 1968 and closing – this time for real – on the blissful Perfection.
Three years on from the release of their first EP and Submotion Orchestra are still writing, releasing and performing music, which is a feat in itself nowadays, and yeah, in case you were still wondering – they’ve still got it.