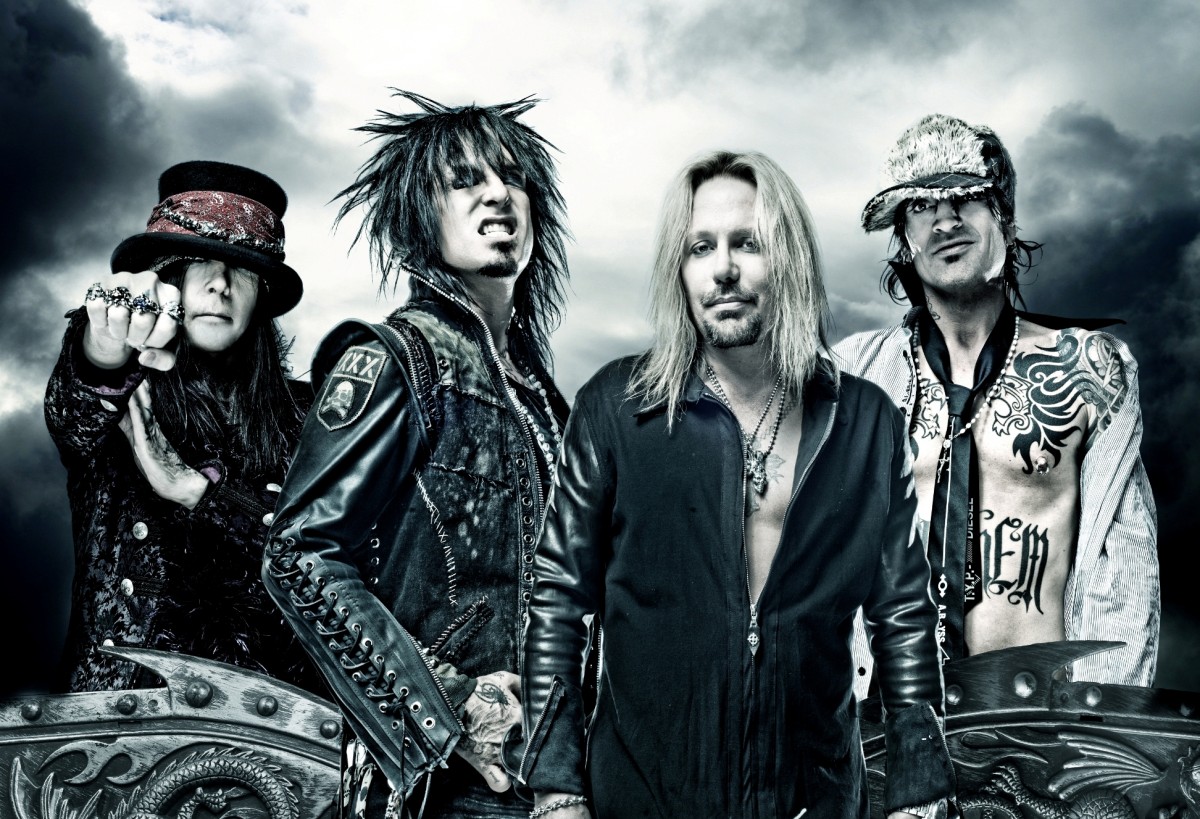 Getintothis’ Shaun Ponsonby caught 80s bad boys Motley Crue on their final UK tour last week, and he was surprised to find it gave him something to ponder.

I’ve been thinking about gimmicks this week. Are they always a bad thing? We like to bang on about “artists” being “real” and all that crap. Last week I argued that everyone in the public eye is essentially a liar, so is gimmickry just a natural progressive step?

I hate that I like Motley Crue. They are the opposite of everything I stand for. Let’s be honest; they’re awful. And yet, there’s also something weirdly endearing about them, and Nikki Sixx is actually pretty good at writing riffs and hooks.

They were in the UK on their final ever tour last week. And this isn’t a run of the mill “farewell tour, but we’ll do a reunion in ten years” affair. They signed a legally binding contract that said they will never tour again (but that will likely have a loophole that will allow some shows to continue). So, I threw my hands up and said “OK”.

Motley Crue have been stuck in a time warp since 1989. It’s like Bernard’s Watch, the old kids show on ITV in which a kid called Bernard could stop time because he was always late (nice fantasy – boring show). The sexism, excess and bombast has remained, despite how much it might make you cringe. This, incidentally, wasn’t an element that was prevalent in Bernard’s Watch.

They managed to coax the Godfather of on stage gimmicks Alice Cooper into being their opening act, something that worked well for them in terms of ticket sales, but majorly backfired on the night.

I have has professed my love for Alice Cooper in great detail on this very site, so it’s no surprise that I was excited to see him again. And, as usual, The Coop didn’t disappoint. The minute he walked on stage, he had every single person in the palm of his hand. He is a natural showman, his band were as tight as anything, his voice was in fine shape and he walked the fine line between maintaining his image and parodying it.

You’d think with a set of just 50 minutes long, he’d just play it safe and chuck in all the hits. Although he did air a lot of them, he didn’t play it completely safe. 2005’s Dirty Diamonds and 1971’s dark, brooding, epic, gothic ballad of paranoia The Ballad of Dwight Fry were given fairly lengthy versions which – despite the unfamiliarity to the Motley crowd – didn’t cause attention to wane, and were fully lapped up.

Although being a support act to fucking Motley Crue (which enraged me) meant that the tracks that got people out of their seats were the likes of Poison (the 80s comeback megahit) and Feed My Frankenstein (the kind of dumb one from Wayne’s World).

Following his on stage beheading, Alice returned to the stage for School’s Out. The stage filled with balloons, bubbles, confetti, an Another Brick In The Wall mash-up, celebration and a feeling that Motley Crue wouldn’t be able to follow this.

Motley Crue are very much in the “guilty pleasure” category. But they are a notorious band and I will maintain that the opening to Dr Feelgood is one of the best sounding records I have ever heard. It still sounds powerful and stomping to this day. However…maybe they should have quit a while ago.

Opening with the guiltiest of guilty pleasures, Girls, Girls, Girls and seguing quickly into Wild Side and Primal Scream things were looking up, despite singer Vince Neil barely singing words. I drew the conclusion that Neil has somehow managed to make up his own language and now insists on translating every song. With vocal melodies also now appearing to be a thing of the past, it’s hard to tell if Neil is bad or just really far ahead of the rest of us and engaging with the avant garde.

The end of Primal Scream was the first time the audience had a chance to applaud. And it was surprisingly quiet – a trend that would continue throughout the night. All the pyro and pleas to “make some motherfucking noise” couldn’t change it. This is in comparison to Cooper, who had the crowd cheering all the way.

The real reason to see Motley Crue is to see the freak show. The band’s autobiography is stuff of legend and you can actually identify the band members by the horrific things they’ve done. There’s Vince Neil, the guy who killed Hanoi Rocks drummer Razzle (manslaughter, not murder) and over the last decade appeared to be on a one man mission to punch everyone in America. There’s Tommy Lee, the guy who had a sex tape with – and later was in prison for beating – Pamela Anderson. There’s Mick Mars, the eccentric guy with the crippling bone disease who is actually weirdly likeable.

And then there’s Nikki Sixx, the guy who temporarily died of a heroin overdose and now has a disproportionate sense of his own importance. Today, Sixx talks about the band that did Girls, Girls, Girls as if they’re the fucking Beatles. Roll over Bob Dylan. Your lyrics are alright, but have you ever written a lyric as good as…erm…whatever the hell Neil was saying in that weird language he’s made up.

The nadir of the show was when Sixx sat down and started talking endlessly about his former life. He was practically reading his autobiography. He sat down with a look on his face that implied we should scream louder for him. When that didn’t happen he just started talking. Eventually he pulled a knife out of his boot and told us about how this knife proves the clichéd point of “always follow your dreams”. I still can’t quite wrap my head around what the fuck he was talking about. But he said it all like it was the deepest shit we’d ever heard.

The gimmicks were most effective for Lee’s drum solo. After confusingly playing the entirety of O Fortuna with the stage in complete darkness, Lee’s riser began to…well, rise. He drummed along to a mixture of funk, metal, hip hop and EDM as his kit made its way to the back of the arena, as he spun around and went up and down. He commented when he got there that he’s always wanted to do a drum solo on a rollercoaster.

Was it a cheap trick? Yes. But, sometimes you’ve just got to let your inner child say “that was fucking cool”.

The crowd finally came alive for the set closer Kickstart My Heart, which featured Sixx and Neil on cherry pickers and every kind of pyro you could imagine, followed by an encore of uber cheesy power ballad Home Sweet Home performed on a b-stage at the back of the arena.

As we were leaving, crowds of people were singing Cooper’s Welcome To My Nightmare, which tells you exactly who connected with the crowd. The difference between the two of them is that Cooper used his gimmicks to articulate the songs, whereas Motley hid behind them. As a result, Motley got their arses well and truly kicked at their own show.

Despite that, it was ruddy good fun.

I’ve just been told that the Getintothis editors didn’t like the article I wrote for this week’s Cosmic Slop and they have refused to share it online.  I just wanted to let you all know how much it hurts. Because I apparently can do no right. I write articles that are funny, and enlightening and potentially life changing to the people who read them. And there is no reason why they shouldn’t force people to read my column. I swear to God, they have absolutely no idea how much it hurts. My work is perfect. And I am fucking sick and tired of waiting on the edge of my seat waiting for these fuckers to come back and tell me the verdict. 73 million people read Getintothis, and that’s 73 million people who won’t get to see the article. Shove it up your arse.