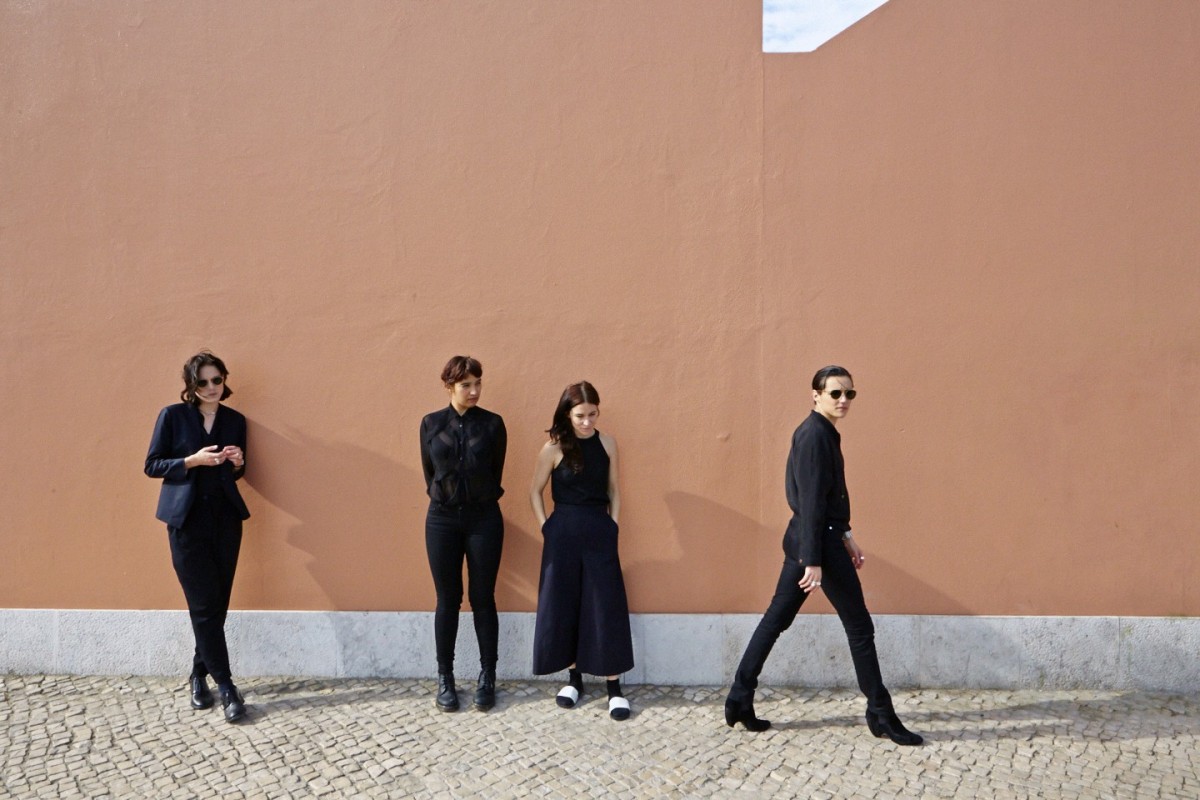 With their new album Adore Life reaping acclaim from all quarters and a European tour kicking off this month, Savages’ Ayse Hassan speaks to Getintothis’ Patrick Clarke on the band’s latest stride forward.

“We’re fuelled by everything in life that pisses us off” says Savages‘ Ayse Hassan. “The motivation for doing this is to show people that you can make music on your own terms. It might not be an easy route to go down, but if they really believe what they’re doing and they work hard enough at it that it is possible.”

She’s speaking to Getintothis ahead of a strenuous five month tour, which kicks off next weekend, and a few days after the release of her band’s long-awaited sophomore LP Adore Life.

Moodier and more complex than their cut-throat 2013 debut, Silence Yourself, it was a record most certainly made on their own terms, and the band’s sweeping progression was one that burgeoned from a live residency in New York that saw the album develop from segments read directly from a notebook to the grinding, snarling final product.

“The essence of what we are is a live band. It’s essential that the record would represent us when we take the songs to the stage” says Hassan, yet though the sound of Adore Life was one hewn from the stone of live performance, when it came to recording it the band sought a more studied approach.

“The first record I feel is quite a raw sounding representative of what our sound might be live. There was  lot more space and time on Adore Life to drill down into the actual sounds that we wanted.”

Even with the record out, this drilling down goes deeper still, and though the New York residency lies behind them it’s still on stage, and more broadly on tour, that the foursome flourish and refine.

“We’ll be listening to music, reading, going to exhibitions, watching other bands while we’re on the road. When you’re experiencing and receiving this information you’ll naturally want to try new things” Hassan says.

The album, though hardly soft, is a spacious, widescreen listen by the frenzied standards of Savages‘ claustrophobic debut, and this new aesthetic was itself borne from years on the road; “Us being open in this record is reflective of a mixture of knowing each other so much better” Hassan asserts. “We’ve learnt to trust our instincts.”

Instinctual is the word when it comes to Savages‘ live sets. With a brutal reputation set in stone from what seemed like the very beginning, the band’s exhaustive live schedule has seen those tightly-wound, abrasive early sets evolve into an amorphous juggernaut of a gig.

The band treat every show as an event itself, “We’re involved in the entire process of putting on a gig. There’s things that we do to keep our sets interesting for ourselves and for our audiences” says Hassan. “I think I can speak for all of us and say that it’s hard work, it’s tiring both mentally and physically.

“I’ve read about so many bands where they’ve been involved in, when they haven’t been fit and healthy, and I don’t know how the fuck they do it” the bassist continues on the exhaustion that comes with such concentrated gigs, and the band take a militaristic approach to keep themselves in peak physical condition.

“A lot of us don’t drink, a lot of us don’t smoke, we’re very keen on ensuring we are physically fit. When we’re on tour we’ll do our own boot camp to make sure we’re exercising so we’re physically able to play an hour and a half on stage. Playing an hour and a half at such an intensity, you need to be fit otherwise you’re not gonna be able to do it.”

Nor are Savages the kind of band happy to relax into the mind-numbing monotony of repeating themselves night after night on stage. Just as Adore Life evolved live before its recorded conception, so too will it evolve once more across the five months of touring that lies ahead.

Surely such a leviathan schedule, which takes in 56 dates and counting,  would be enough to dull the sharpest of sets, but Hassan is quick to rebuff.

“That’s why we always try and push ourselves to try new things, to experiment with sounds, to try and make an event out of a show”  she says, conceding only that, “the exhaustion can come from constantly thinking about how to improve what you’re doing, because there is always a way. It can be exhausting trying to bring those ideas into reality.”

When the band hit the North West on February 22 at Manchester’s Albert Hall, it will be at the beginning of this transatlantic slog, the only guarantee ahead of the show being that it will be entirely unrecognisable come the end of festival season.

“I can’t really tell you how it will change, but I know it will” says Hassan as we conclude our interview, whereupon I ask whether the band’s constant strive for evolution might be labelled perfectionism. “I think we take pride in the music we make” she responds, aloof.

“There’s a lot of work that we do to make sure that what we do is to the standard we all want to achieve. I don’t know if that’s being a perfectionist… I would just say that everything has to be as we want it. I guess you can make of  that what you will.”