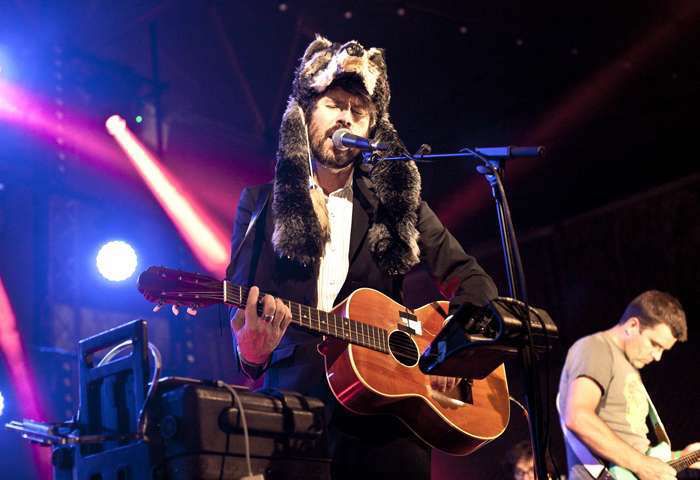 To say the return of the Super Furry Animals was highly anticipated is something of an understatement. From the moment the teasing trailers were unleashed, social media was ablaze with speculation as to what it could all mean. Not long afterwards we got our answer, the band were reforming and touring for the first time in six years in support of the re-released Welsh language masterpiece Mwng. We have always regarded the Super Furries as a unique band that time would come to regard as ground-breaking and highly influential. Their talent was emphasized during their six year hiatus with a dizzying array of solo projects.

Gruff Rhys has released a number of excellent solo albums imbued with songs of poetry, fun and intelligence, he has written a book and also made a couple of fascinating documentaries and has therefore been the most prolific…just. Cian Ciairan released two solo albums, the latter dripping with political fury, and the delightful debut album by Zefur Wolves, with his partner Baby Queens’ Estelle Ios up front and singing beautifully.  Brother Daf got together The Earth and created two albums with the astonishing vocals of Dionne Bennett. Guto got together Gulp and Bunf the Pale Blue Dots to illustrate their own musical direction when released from the SFA Leviathan.

When the dates were announced tickets were snapped up in mega quick time showing that there was a real appreciation for the band that maybe they did not totally believe themselves. And so they embarked on a sold out mini tour, and Getintothis managed to catch them in Manchester, and so it was we found ourselves in the Brewdog next door listening to a myriad of Welsh accents swarming this part of the city. Having never been to the Albert Hall before we were impressed by the building itself, and like the rest of the sold out crowd, couldn’t wait for the Super Furry Animals to test its acoustics.

The familiar thudding beat of Touch Sensitive indicated the arrival of the band, resplendent in white outfits, and the reception from the crowd was gob-smacking. Six years of waiting encapsulated in one magnificent roar. Rings Around the World, Do or Die and Neo Consumer launched the show in triumphant fashion, mining songs from the band’s fifth, third and eighth album respectively, before the early hectic pace gave way to the beautiful If You Don’t Want Me to Destroy You from debut album Fuzzy Logic. Demons was all stately majesty, as horns wafted down from the heavens (literally) accompanying the glorious noise from down below.

The jaunty steel drum smile of Northern Lights followed and whilst the tempo remained the same the language changed for the first delivery from Mwng, the backing vocal drenched Ymaelodi Ar Ymylon. Y Gweneb Iau, Nythod Cacwn and Pan Ddaw’r Wawr formed a slab of Welsh wonder before a return to English with the opus that is Run, Christian Run. So far so perfect. Gruff’s voice was wonderful all night but Run Christian Run is a real showcase for his range, and his howling outro backed by Cian’s mesmerizing background bleeps and bangs was jaw-dropping. There was hardly a break during the first hour of the set and each song was interspersed by a wild acknowledgement from the crowd. This truly felt like an epic return, a homecoming far from home.

Many SFA afficianados rank Hello Sunshine as up there with their best songs and so it was dusted down and given voice alongside the beautifully haunting Hometown Unicorn. The first time we ever saw Zoom live, we were a little worse for wear, and the space age sounds and backing animation had us convinced aliens were landing. The effect was similar tonight; it is a truly majestic tune.

From one of their later songs, the band retreated back towards the very beginning with the schizophrenic marvel Arnofio/Glo in the Dark and from here on in the set really took flight. Ice Hockey Hair, Gwreiddiau Dwfn and the mind crushing Slow Life illustrated the widescreen nature of the Super Furries‘ back catalogue. The summer Number One that never was but should have been, Juxtaposed With U, was immaculate and signalled the start of a fiery triumvirate comprising The International Language of Screaming, Golden Retriever and the barmy madness of Receptacle for the Respectable.

Still the crowd was roaring, their appetite unsated by what had thus far been a fantastic trawl throughout the gamut of the SFA back catalogue. The lovely Fire in My Heart tempered their enthusiasm somewhat before the techno freak-out of Mountain People (a biographical song about the political wastelands of North Wales, one that once more looms closer tonight as the Conservatives go about their jackbooted march to another five year term).

Given the early signs of General Election misery, it was more than apt that tonight should end with the fierce political agitation that is The Man Don’t Give a Fuck, and its furious assault on the senses positively fizzled tonight. The crowd had not stopped moving all night but this was something else. Sheer madness greeted the return of the yetis as the Super Furry Animals reminded everyone present that this was a vital and still totally relevant band.

This did not feel like the end, but a new beginning, and if they do get around to completing a new album, those who didn’t get them first time around can enjoy both the fun and the fury of a band that has  been truly and sorely missed.