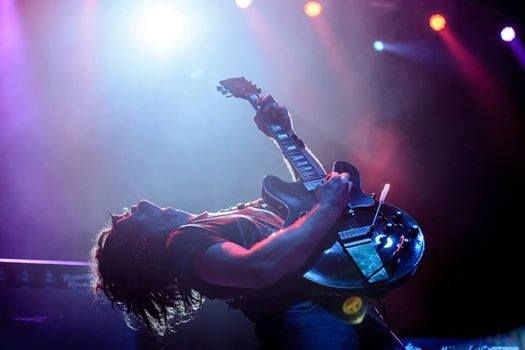 A jampacked venue for a living legend in his own right, Getintothis’ Neal McGrath makes like a sardine at Manchester’s Albert Hall for Ryan Adams and The Shining.

Here at Getintothis we’re not ones for making accusations but we feel someone, somewhere got a little bit greedy. OK Granted this was not on the scale of a rapacious promoter stuffing a few thousand extra fans into the infamous 1969 Miami concert by The Doors, where Jim Morrison allegedly unleashed ‘little Jim’  but making our way into Manchester’s beautiful Albert Hall we walked straight into a brick wall of grumbling gig goers, packed tight like sardines, straight up to the back wall, where a suitable view or refreshment by one of the flanking bars, was just a distant dream.

After following some ‘enterprising’ young zealots through a gap of their making we arrived at a spot were the stage was visible and we could take in the surroundings of the grade II listed Wesleyan Chapel before Ryan Adams and his new backing band The Shining made their way onstage.
They’re here promoting Ryan’s eponymous new album and it’s here they start,opening with a swaggering Gimme Something Good followed swiftly by a brilliant, slightly slower, swamp rock version of Fix You from 2008’s much maligned Cardinology. Being in a band with Ryan Adams must not be easy but it can never be boring. With his extensive back catalogue to learn and last minute set list deviations, one must always be on their toes. The Shining are up to the task however, they’re tight from the off and refuse to be thrown off by Ryan’s curveballs. Special mention must go to the keyboardist Daniel Clarke who’s bubbling swirls especially on the older material recalled Garth Hudson’s work in The Hawks.
There’s at least one moment in every Ryan Adams gig when he plays a song you’ve heard a hundred times and spins it on it’s head, somehow making it sound brand new. Tonight that song was an impromptu Why Do They Leave (to the band:”I don’t know if you guys know this one but….”). He sings it higher than usual, his voice soaring around the familiar melody wringing every ounce of emotion from the song with chilling poignancy aiming directly at anyone who has (or is about to) lose someone they truly care about, at the time they need them the most.
The rest of the set sprawls from Tom Petty-esque anthems (Trouble), moody, reverb-drenched alt-rock (Shadows) and country-rock gems (Oh My Sweet Carolina, A Kiss Before I Go). As he’s in Manchester he insists he has to play the worlds finest Smiths pastiche Anybody Wanna Take me Home. His lyrics are not up there with Morrissey’s and the boy ain’t no Johnny Marr but one place Adam’s excels is his peerless grasp of melody as you can hear in the soaring chiming guitar arpeggios.
His 2005 masterpiece Cold Roses is represented here by Magnolia Mountain and Easy Plateau . It’s nice to hear them attacked by someone else but his former backing band The Cardinals for a change, the latter in particular lending itself to prolonged Grateful Dead style jamming.
Even his unreleased catalogue is touched upon, playing The Door a doom anthem off the infamous Blackhole record. Whilst most of his brilliant unreleased records can be obtained by anyone with a basic grasp of Google, Blackhole has thus far managed to elude even the most ardent of Ryan Adams fans despite being pressed to vinyl for release. Hearing The Door live does nothing but increase the rabid desire for the last album he made whilst under the influence of drugs and alcohol.
Adams deals with the frequent hecklers with ease, often bantering with them mercilessly, much to the rooms delight. Near the beginning the hall’s cavernous acoustics played havoc with what the band themselves were hearing but after a while it seemed to calm down and while perhaps a tad quiet it sounded great from were we where.
As the end approached and having over-ran already, there’s no time for a traditional encore, instead he launched into Come Pick Up, the whole room singing the chorus back to him.
As an over-zealous heckler put it several times throughout the evening, Ryan Adams and The Shining, they “smashed it“.