Getintothis’ Shaun Ponsonby vents at Justin Bieber for replacing himself with a cardboard cut-out for fans who paid $2,000 for a Meet and Greet.

I can almost definitely confirm without fear of contradiction that I am one of the most awkward people you could ever meet. I find most kinds of social situations are bemusing and irritable. Even when I am smiling and nodding at people in a relatively calm and collected manner, on the inside I’m praying for death – or at the very least an excuse to leave.

As a result, I have concocted several coping techniques. The first is one – which even I think is weird – is that I pretend I am Van Halen front man David Lee Roth. By this, I mean I adopt some of his persona; kind of charming, extroverted, flamboyant, a bit all over the place and a few pre-prepared zingers on regular topics of conversation (e.g. health, fitness or diet talk usually have me saying; “I used to jog, but the ice cubes kept falling out of my glass”, or on music something like; “Music is like relationships – I’m constantly baffled at other people’s choices” etc). But this only gets you so far and only works in short periods of time. Eventually even I don’t want to hang out with me.

Another is to adopt a hyperbolic rendering of my Cosmic Slop persona; a defence mechanism that sees me act as a deliberately awkward, vaguely contrarian and slightly irreverent rambling mess who is barely able to finish a coherent sandwich. The idea is that this is supposed to be an endearing dosage of nervous energy, but I think in reality it just repulses people.

To be honest, neither of these techniques are particularly helpful. I don’t know why I bother. It takes up an alarming amount of energy when I could essentially just sit in a corner and drink heavily with my iPod until I am finally able to leave.

I invite Justin Bieber to at least try them out though. This week he cancelled all of the “Meet & Greets” fans had paid for via a lengthy and grammatically challenged Instagram post; 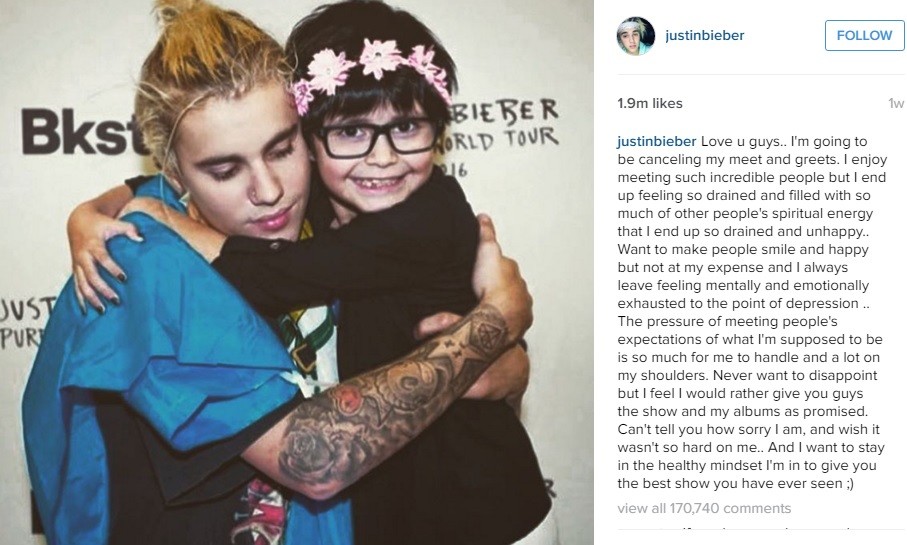 Incidentally, I don’t mean to keep covering Justin Bieber here, but he has just become so bloody difficult to ignore. Like the omnipresent smell of sweaty feet.

This message is all over the show. What a way to give bad news. “Love u [sic] guys…I’m going to be cancelling[sic] my meet and greets.” That’s pretty abrupt. Imagine if a doctor called you and said “You have a nice voice…your mum’s dead.”

“I enjoy meeting such incredible people but I end up feeling so drained and filled with so much of other people’s spiritual energy that I end up so drained and unhappy”. Let’s play a game; how many contradictions can you spot in that one sentence? Also, it sounds like he’s talking about meeting an inspirational figure like Mandela or something, as opposed to 12 year old fangirls. If he feels inferior after meeting such “incredible” twitter stalkers, then it probably says a lot about him as a human being. If he likes making people happy, but doing so makes him depressed, he should probably seek help immediately. That amount of inner turmoil is bound to combust sooner or later.

Read every single past edition of Cosmic Slop before the apocalypse happens and it’s too late.

“The pressure of meeting people’s expectations of what I’m supposed to be is so much for me to handle and a lot on my shoulders.” What? He finds it hard to be reasonably pleasant to fans for 20 minutes?

But I don’t want to be all Chris Brown* about this. If it is leading him to depression, he should absolutely stop doing it. It is easy to mock (as I have just proven), but fair enough, right?

Except it isn’t fair enough, because it has emerged that fans (or rather their parents) who paid $2,000 to get their photo taken with the obnoxious twerp are not allowed to claim a refund for the now non-existent Meet and Greet without also forfeiting their ticket for the show.

So how did they compensate those fans?

This girl paid $2000 for a Justin Bieber M&G and this is what she got. I feel so bad for her pic.twitter.com/UGxbSZFdQ0

Though, speaking objectively, the inanimate cardboard Bieber probably has about as much personality as the real Bieber, meaning the experience will be about the same. But what kind of snivelling wretch charges kids $2,000 to meet them for a couple of minutes and then refuses to refund the money when he has decided he can’t be arsed showing up? Have these kids not suffered enough being Justin Bieber fans?

In contrast, I’d like to point out that when Motown legend Martha Reeves played Liverpool last summer, she sat at the side of the stage following the performance and met every single member of the audience who wished to.

Now the lack of refund is unlikely down to Bieber, it is more likely the promoters who made that decision. I did see one report that claimed he was “angry” about the decision. But on the other hand, I am yet to see him comment publicly on it. Does it not strike him as hypocritical to go on about loving “u guys” and being full of “spiritual energy” if he is employing a team of greedy swines in the process? Talking bollocks means nothing, actions speak louder than words.

Personally, I think the idea of pop and rock stars charging thousands to meet them for three minutes is a total dick move in itself. It is the first clue that they think they are above non-famous plebs like you and I, even for my heroes who do it. If Christ himself returned for judgement day and charged me $2,000 to say “Hi” and get a quick snap for my Facebook profile picture, I’d tell him to get fucked.

*If you’re not aware of the Chris Brown reference, he’s continued his mission to become the world’s most unlikable arsehole by mocking Kehlani after her suicide attempt.

Radio X listeners have picked Wonderwall as the greatest ever British song. Obviously that’s bollocks, but what do you expect from a station whose on air talent include Johnny Vaughan, Chris Moyles, Ricky Wilson and Vernon Kay. #DeathToLadRock

In a rare moment of sincerity, as someone who thinks he’s funny but probably isn’t, I’d like to encourage people who didn’t know who Garry Shandling was before his death to check out It’s Garry Shandling’s Show and especially The Larry Sanders Show. Without them we wouldn’t have; Curb Your Enthusiasm, Arrested Development, The Thick of It, Veep, 30 Rock, Alan Partridge, The Office, Extras, Jon Stewart on the Daily Show, Kumars, Lead Balloon, Entourage, HBO making viable television.