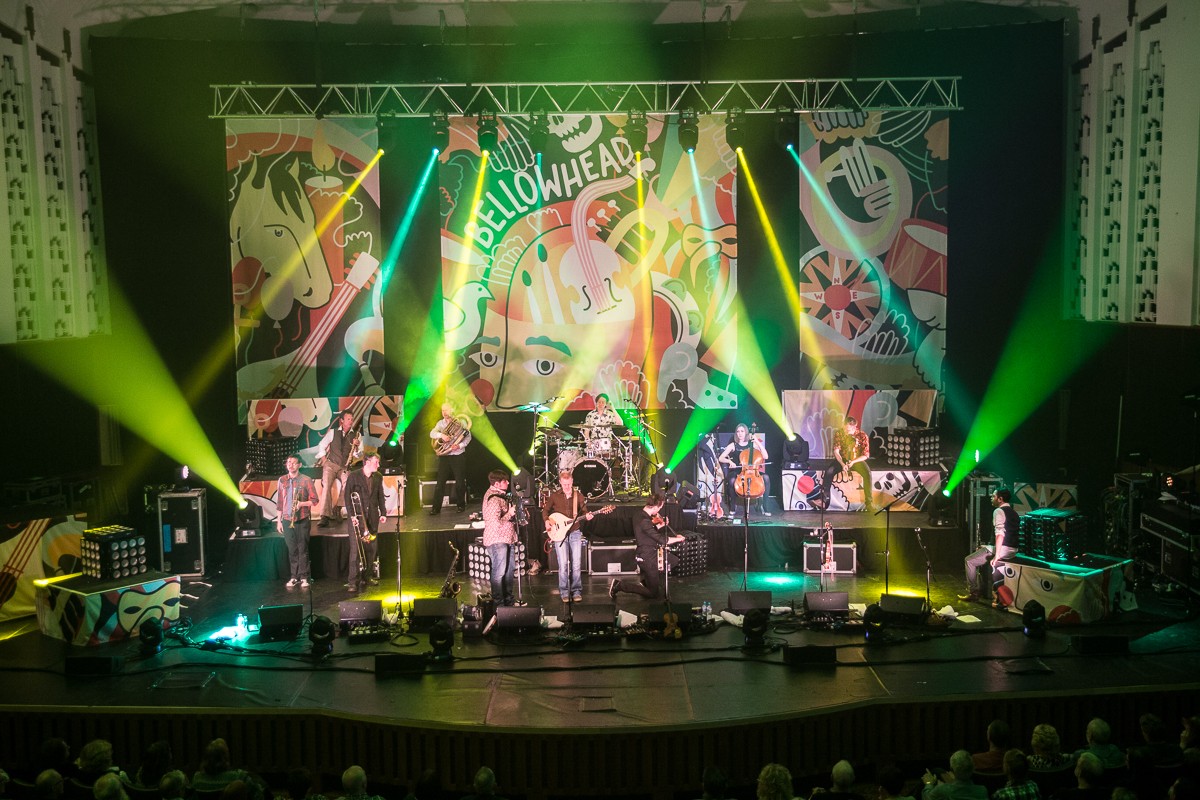 As the good ship Bellowhead sailed into town for a final hurrah in a much-favoured venue, Getintothis’ Paul Fitzgerald called in to bid a fond farewell.

All good things must come to an end. Even multi award winning 11-piece contemporary English folk bands, it would appear. 11 years, five albums, and eight BBC Radio 2 Folk Awards since their inception in a traffic jam conversation, Bellowhead announced in June of last year that they would split for good.

Leading character and lead singer Jon Boden had decided that he no longer wanted to front the band, and the remaining members felt that they wouldn’t wish to carry on without him. And so, the end of this magical, exciting collaborative folk project was signalled with the announcement of this, the Farewell Tour.

Bellowhead have (had?) an incredibly loyal and diverse following. Older traditionalist and purist folk fans have danced side by side with skinny-jeaned hipsters year upon year, united in their admiration of this loud, brash folk revivalist band.

It’s a key point to note that Bellowhead have breathed new life and new ideas into English folk music, opening the minds and ears of new followers to a breadth of new, and old, music as they went.

Old songs that feel foraged and gathered rather than merely collected, given a new life, a new twist, new arrangements and brought to new listeners keen to explore. From Brazilian sea shanties to Napoleonic War songs. Cornish ballads to English songs of the sea.Evocative and character led works of old, given that energetic and frenetic Bellowhead flavour.

Over 20 instruments, 11 raised voices, and dynamic arrangements across multiple genres, ska to disco, jazz to rock, have led to their massive appeal as a live proposition, and yet again, they’re back here in the graceful splendour of the Philharmonic Hall, for yet another sold-out show in one of their favourite cities. Liverpool has always welcomed them. Liverpool gets it. Its in the water, in the blood.

From the opening intimate drama of their powerful version of Brel‘s Amsterdam, we’re reminded of the incredible musicality and skill of this impressive co-operative of friendly folk-ups. Taking turns in the light, and swapping instruments throughout, the show takes in highlights from those five albums. And those instruments. Only at Bellowhead show would you find the bottom end being supplied by a dancing man wrapped in a Helicon, while someone else plays an overdrive drenched Bazouki through a wah-wah pedal. Great, stonking blustery brass stabs puncture the manic fiddles, and

Only at Bellowhead show would you find the bottom end being supplied by a dancing man wrapped in a Helicon, while someone else plays an overdrive drenched Bazouki through a wah-wah pedal. Great, stonking blustery brass stabs puncture the manic fiddles, and damn right funky drumming, and all the while, all 11 of them run around the stage, clambering over the set like hyperactive toddlers out of their minds on Haribo. A dizzying, and actually rather marvellous display, as per.

At the centre, steering the ship, as ever, is the commanding and engaging Boden, an incredible stage presence, and multi-skilled instrumentalist, graced with a voice as strong as would be deemed necessary to front such a massive show, such a huge sound. Arms aloft, he leads the band as well as the audience from lights up to curtain call.

Old favourites Fakenham Fair, Roll, Alabama, Roll and self-penned dances such as Flight Of The Folk Mutants Parts 1 and 2 take pride of place in the lengthy and tightly packed set, and as the show began to near its climax, the mood turned from disappointment at the loss of this magnificent band towards the realisation of the fact that this would be their last ever Liverpool show, a time to celebrate their contribution, and the last chance to do so came with New York Girls and London Town.

Simultaneously a warmly welcomed return, and a final but very fond farewell. At least some other bands will finally get a chance at the BBC Radio 2 Folk Award for Best Band now, eh?

Support tonight came from Mawkin, a four piece band, loosely in the Bellowhead mould. For us, though, they lacked the conviction or engagement of their tour mates. Rather than folk, this would be better described as folk-y, folk-ish, folk-esque. It all felt a little Covent Garden buskers for us. Maybe our expectations on a night like this were a tad lofty, but the mark just didn’t seem to be met here. 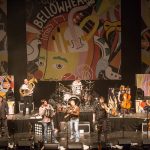 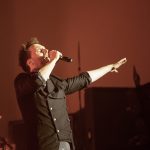 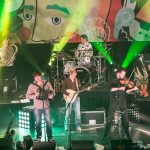 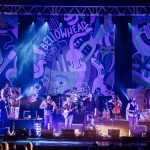 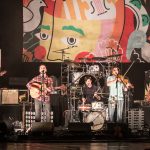 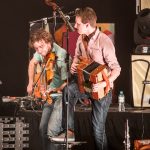