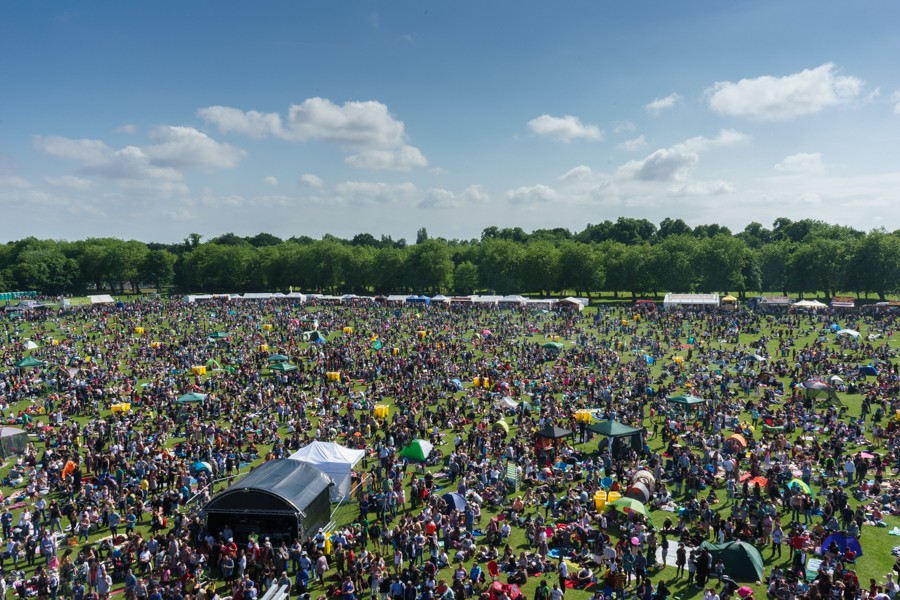 With a day of glorious sunshine and another of a monsoon, Getintothis’ Glyn Akroyd and Janaya Pickett report from the chilled out weekend at Sefton Park for Africa Oyé.

It’s been a tough two weeks. The world at present seems to be going a bit ballistic and at a time were social media and 24 hour news reign supreme, it’s hard to ignore. Monty Python’s advice about always looking on the bright side is easier said than done; try as we might there are these constant tragedies, consistent ignorance and fascism. Africa Oyé 2016 could not have come at a better time.

Saturday started out quite cloudy and Rimka and played to a sparse, but dedicated audience. Not a bit phased by their placing on the bill, they shook the crowd with energy and set the tone brilliantly for the weekend. XamVolo brought the new school. He and his band breezed through the jazz fusion set, moving effortlessly from track to track proving with ease why there is such a buzz around this Liverpool based artist.

The party continues through the late afternoon with Akala’s mesmerising and righteous hip-hop (including a toff financier alter ego who hates those “thieving Scousers”) delivered over samples but with the welcome addition of a superbly crisp drummer, and into the early evening with Damily’s delightful mix of traditional rhythms and electric guitar.

As the sun sets on day one, Pat Thomas and the Kwashibu Area Band absolutely nail their headline status. There’s a smooth silky feel to the brass and keys, a driving insistent percussion and chiming guitar, the vocal harmonies are soulful, Thomas himself a charismatic presence. Exquisite.

After Saturday’s Factor 50 experience, Sunday is played out in a deluge of Biblical proportions. Inevitably the crowd numbers are drastically reduced but that doesn’t stop those that congregate in front of the stage from showing their enthusiasm.

Bilan’s acoustic Africana fell flat as the heavens opened and crowds dispersed. Bilan and follow up artist Sona Jobarteh did not really get the attention they deserved as those remaining sorted out shelter, ponchos and umbrellas. The music was good, but the slow sounds perhaps not suited to the pouring rain.

Oye is just the beginning! Check out what else is in store this summer with our festival guide.

Where there were once crowds of barbequeing, dancing festival goers there are now flocks of seagulls circling and diving for the morsels of yesterday’s feast. The die-hards braving the weather are rewarded by a bravura performance from Baloji. Hailing from DR Congo, he arrives like Little Richard, teasing the crowd with his stop-start antics and fronting a top band who blend blues, jazz and funk into the Afrobeat mix. The final song builds over a repeated four note guitar motif to a rousing climax which sees Baloji writhing around the stage.

It’s left to Mbongwana Star to round things off and they do so exuberantly with a mix of high-velocity guitar and traditional vocals. K9’s guitar shifts between highlife and stadium rock seamlessly, soaring, rippling lines vying with fuzzy riffs and drawing constant applause. Theo Nzonza and Coco Ngambali’s vocals compliment each other perfectly and their energy defies their wheelchair-bound condition. The crowd are moving under a canopy of bobbing umbrellas and bring them back for a deserved encore.

The atmosphere at Oyé is positively uplifting. Anything goes. Cultures come together seamlessly and wear whatever the hell they want. Liverpool’s black community come out in force and we get a glimpse of the multiculturalism present in our city. After having so much extremism shoved down our throats recently, it’s a relief to see how easy it is to integrate and have a good time. It is always one of the best weekends of the year, and 2016 is no different. 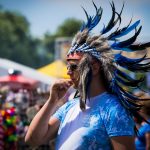 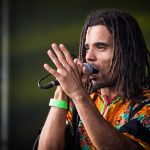 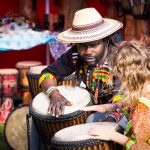 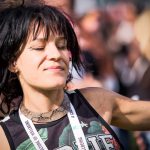 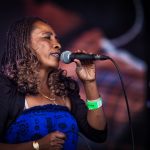 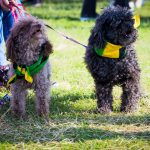 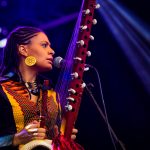 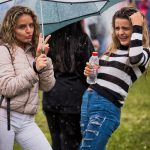 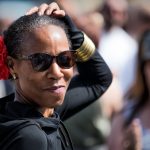 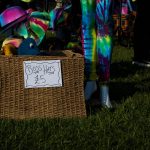 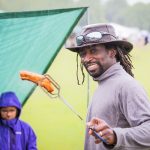 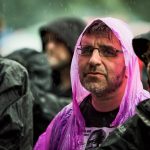 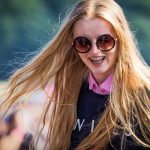