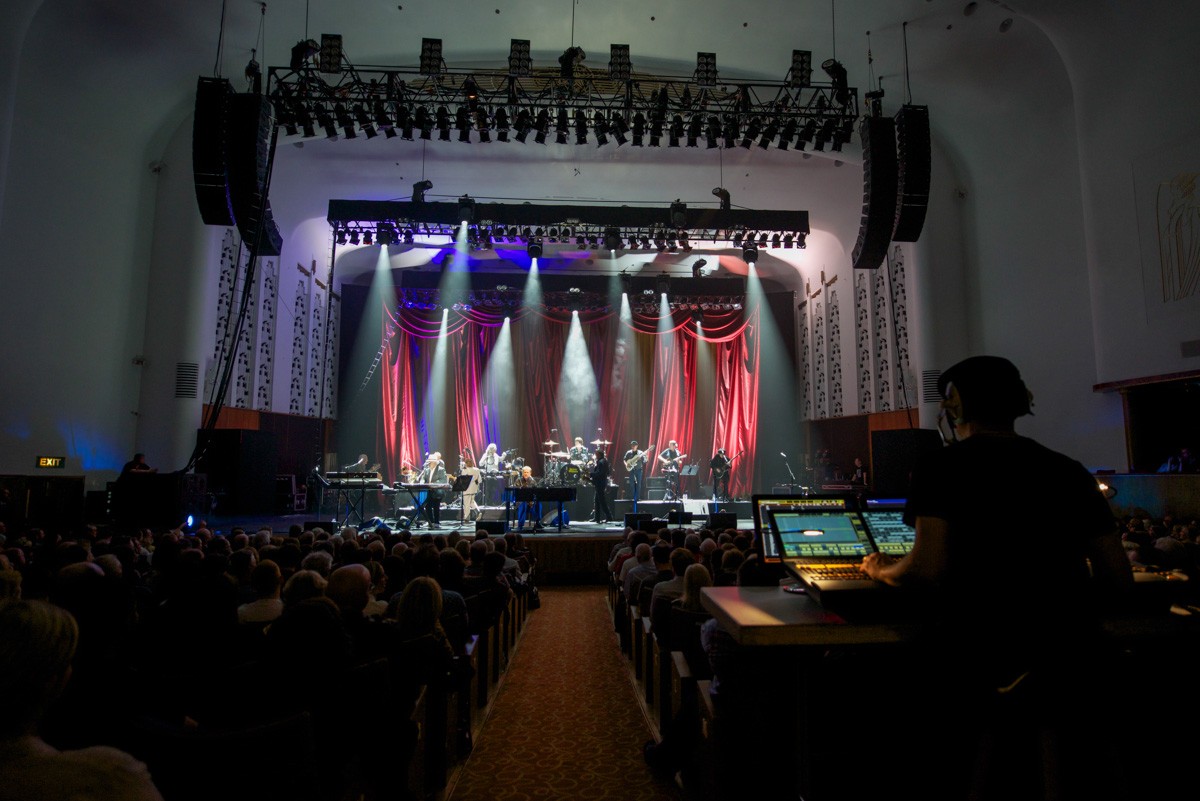 The legend that is Brian Wilson played at Liverpool’s Philhamonic Hall and Getintothis’ Rick Leach witnessed something truly special.

Brian Wilson arrived in Liverpool after five days of continuous early summer sunshine and while it may not have been at Californian levels, it certainly felt very fitting, especially he was performing the classic Beach Boys Pet Sounds album in its entirety.

Fifty years on from the release of Pet Sounds – being released on May 16 1966 – we had missed its birthday by a fortnight. Still, it was something worth celebrating, an album that’s rightly acclaimed as one of the most perfect pop albums of all time.

The story of how the making of Pet Sounds caused deep schisms within an already fragile collection of egos that made up the Beach Boys and tipped the musically obsessive Wilson, who was already a deeply troubled young man over the edge, is a well worn tale and one that does not require repeating. Needless to say, just to see him shuffle on stage at the Philharmonic Hall at the start of the show and wave to an audience was a sight that many of us only could have dreamed of a few years ago.

Although the reason for the show was the unabridged performance of Pet Sounds and as that album only lasts a mere 35 minutes, there had to be a bit of padding either side. And if you are going to pad a show with filler tracks, then the best sort of filler tracks are those written by Brian Wilson for the Beach Boys all those years ago.

Those tracks may have been filler to Brian Wilson, but to all of us who were there, they were most certainly not. These songs are more than filler to most other artists as well and if you are going to raid your back catalogue then you can do no better than kick things off with Our Prayer, segueing into Heroes and Villans, some of the few tracks that were initially released from the aborted Smile album. It was clear from the start that Brian Wilson had managed to assemble a crack band of highly talented musicians, swapping and picking up instruments at will to magically recreate a track that you’d think would be impossible to create outside of a studio in 1967. Wilson’s voice itself was surprisingly strong and although he was helped out vocally throughout with the assistance of Matt Jardine – the son of the Beach Boys’ Al Jardine, who was ever-present by Wilson’s side during the show – it belied his 73 years.

From Heroes and Villians we were treated to faithful and crowd-pleasing renditions of California Girls, Dance Dance Dance, Shut Down, Little Deuce Coupe and Little Honda. If you are going to start a show off well you couldn’t do better than that. As everyone sang along, it was easy to imagine that there were ranks of hot rods parked outside the Phil with surfboards strapped to the roofs. We had been transported back in time and across an ocean by deceptively simple pop songs.

The lights dimmed a touch on stage and Brian Wilson introduced a ‘pretty little ballad.’ Sitting as he did through the show behind a grand piano, he plaintively sung what could be the saddest song ever, In My Room. There was a certain poignancy to see this man, who at times looks so far away and lost, singing about being ‘in the dark and all alone.’

For this writer, this would have been an ideal time for the break before Pet Sounds was performed. It would have provided a good introduction to the album, yet the show carried on with a bit of a jarring change in tone with Surfer Girl and Don’t Worry Baby – both great songs, but maybe not the best way to carry on.

We were then treated, if that’s the right word, to the entrance on stage of Blondie Chaplin, guitarist with the Beach Boys in the ‘70’s when Brian Wilson’s involvement with the group was limited. Now Blondie may be a fine musician himself, having also recorded and performed with the Rolling Stones, yet throwing uber-cliched rock shapes while thrashing away at his guitar and running across the stage, as Brian Wilson himself remained stock still behind his piano, seemed odd, embarrassing and out-of kilter with the whole thing.

In an even more surreal twist, the first half of the show ended with a version of Bobby Pickett’s novelty hit, Monster Mash. It was not only us, but the whole audience seemed somewhat baffled by the inclusion of this in the set. Blondie Chaplin grunted his way through Sail on Sailor as Brian Wilson very slowly and somewhat sadly ambled off stage mid-song and the first half of the show was over.

Pet Sounds you say? Check out our Top 10 songs about pets

A twenty minute intermission followed and with some of the audience still hanging around the doors of the Phil enjoying the late evening sunshine, Brian Wilson and the band (thankfully minus the grizzled Blondie) wandered back on stage with no warning and launched into Pet Sounds.

The anticipation and excitement that rippled through the Phil as the opening notes of Wouldn’t It Be Nice wafted across to us was tangible; we were hearing something that we all have probably played countless times and now we were seeing it right in front of our eyes. Brian Wilson performing Pet Sounds in full!

He intended it to be ‘the greatest rock album’ ever made- he wanted it to be perfect. Achieving perfection in anything of course, is something that is probably impossible to do, but if any album could be described as perfect then Pet Sounds gets pretty close.

There’s always a risk when reproducing a classic album live, and especially where gifted musicians are involved, that additional frills and irrelevant frippery are introduced. Thankfully, restraint was the order of the day, and every track was a near perfect version of the recorded version. Matt Jardine did a lot of the heavy lifting vocally, which was only to be expected. It wasn’t just this writer who had a lump in his throat and a speck of dust in his eye as Brian Wilson magnificently and very stoically sang the heartbreaking words of Don’t Talk (Put Your Head on My Shoulder). In a very unexpected way, this song, which originally talked of young love, seemed even more fitting when sung by an old man who has lived a life that is probably beyond all our comprehension.

Upon initially hearing The Beatles Rubber Soul album, Wilson was blown away and determined to  write something even better. It was therefore a nice touch, one without affectation and a measure of the man, that he introduced God Only Knows as a song ‘that Paul McCartney likes.’ It’s not only Macca; who could fail to love something so immaculately crafted? Two minutes and fifty seconds of timelessness.

Caroline, No, being the final track on the album, fittingly finished the set and there was a microsecond, a brief heartbeat, no more, as the whole audience rose as one and applauded with genuine gratitude and affection at what we had just witnessed.

A short and well received encore of Good Vibrations, Help Me Rhonda, Barbara Ann and Surfin’ USA bookended the show in the same way that it had started.

We thought that it was all over, but with a single spotlight on him, Brian Wilson performed a gentle and moving solo version of Love and Mercy before leaving the stage for the last time.

We shall probably not see his like again and this show was something to be treasured and to hold in our memories for a very long time. Genius is a much over-used word when writing about music, but if it can be applied to anyone, then it should apply to him. 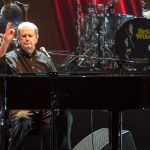 Brian Wilson takes to the keys 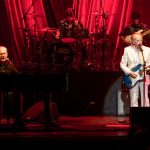 Brian Wilson and his band 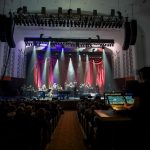 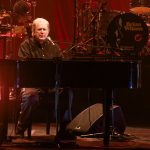 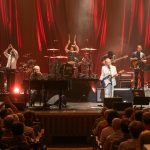 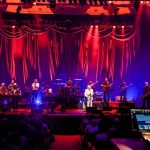 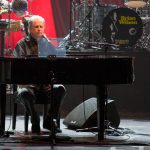 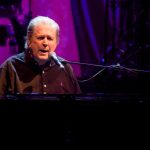 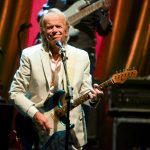 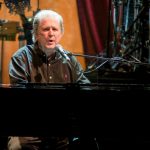