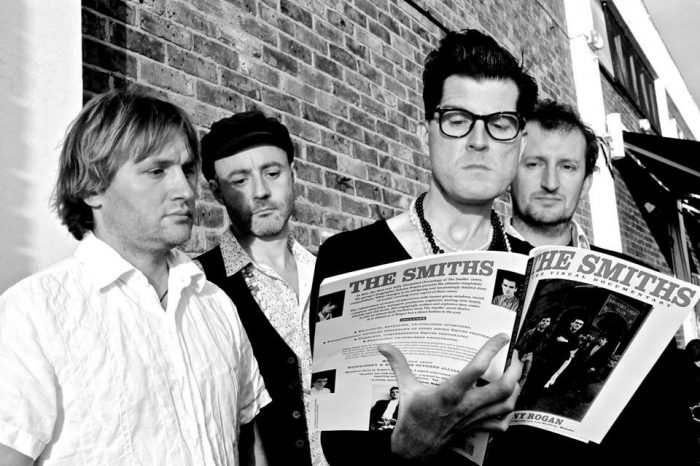 A strange and parallel world as Getintothis’ Rick Leach looks into the inexplicable rise of tribute acts.

You can’t move for them these days; tribute acts, that is.

A cursory glance at what’s coming up at Liverpool’s O2 Academy shows that forthcoming gigs include The Southmartins (paying tribute to both The Housemartins and The Beautiful South), The Smyths (you can guess), The Carpet Crawlers (Genesis), Definitely Mightbe (Oasis) and The Antarctic Monkeys (you may have to read that last one twice) amongst others. And this is only one venue.

The same pattern is replicated across the country, from venues both large and small. Look at any music magazine or website where forthcoming gig are advertised and you have to sort out the wheat from the chaff. There’ve been times when I’ve driven past flyers posted on walls and had to have a double take as it appears that Prince or Led Zeppelin are due to play in our town in the next few weeks. On a second look, it’s always a badly punned name and my hopes are dashed (should have gone to Specsavers). There are even whole festivals dedicated solely to tribute acts.

How did we get to this point? Is the live music scene so lacking in acts that it’s has to be bulked up with look and sound-a-likes? Is everything spread too thin? Are the new artists that we see just not exciting enough? Are we living in the past and constantly harking back to some non-existent halcyon past?

There was a time – maybe not too long ago – when tribute acts were a rare beast. All bands did covers, they have since time immemorial and that was always a way of learning stage craft, gaining their chops and playing music that a paying audience both wanted and expected to hear. And of course, it still happens today. There is a certain frisson of excitement when, even now, you’re watching an act and they cover an unexpected, yet well-loved track. But that’s far away from total imitation and playing the whole tribute act card-stage moves, costumes and the like.

At one time the only tribute acts you’d see would be Elvis impersonators down your local social club, usually doing the fat Vegas complete with bad and fake “thankyouverymuch” endings to all the songs covering up Wigan accents. You might come across the odd Sinatra impersonator as well, but that was the difference; they were impersonators as opposed to tributes. A telling difference.

Probably the first real “tribute” act that this writer saw were The Bootleg Beatles playing at Liverpool Polytechnic (remember them, Polytechnics?), sometime in the early 1980’s. I think that I’d only gone along for a bit of a laugh, tagged along with someone and not really expected that much. But they were surprisingly enjoyable in a strange sort of way, not only sounding like I’d imagine the Fab Four would, but looking like them as well. From what I dimly recall, they even went through a number of costume changes throughout their set, so as to accurately reflect which songs they were playing.

Whether The Bootleg Beatles were the first of the new tribute acts, we’re not entirely sure. There may have been others of course, but they were the first that entered my radar. And slipped away again. And as things do, only to be recalled in those “remember when we saw…” conversations that all us live music fans have.

Somewhere along the line, years later we kept noticing that The Bootleg Beatles were still going and playing larger and larger venues. They must be doing alright, we thought to ourselves. We also noticed that there was another act also doing the rounds and similarly playing large venues, The Australian Pink Floyd.

I put this down to a bit of wish-fulfilment. It was impossible for The Beatles to play live again of course, and Pink Floyd, to all intents and purposes were just as defunct. This was as close as anyone would get to seeing either of those behemoths in a live setting and if they were impersonators, well so be it. Pink Floyd at the Echo Arena, complete with lasers and such, albeit an Australian Pink Floyd, made a change from Kevin from Grimsby gamely warbling his way through Suspicious Minds at the local British Legion.

We still had them both pegged down as impersonators rather than anything else and as slight curios. It never occurred to us that The Australian Pink Floyd and The Bootleg Beatles were anything more than that.

Gradually, and it’s only been over the last ten or fifteen years or so, things have changed somewhat. Subtly yet significantly.

The rise of the tribute act. The fall of impersonators.

From theatre shows, musicals where acts like Queen were revived in “a show”, there’s been a staggering rise of stand-alone rock gigs, where bands that no longer exist are imitated and revered. From being billed as ‘a tribute to…’ the parlance has changed and altered and these bands are being referred to as tribute acts.

Initially, it seems as if the first tranche developed from bands that could no longer exist such as The Beatles, Pink Floyd, Queen et al simply because one or more of the original band members were dead and miracles don’t happen. You’d never get to see them again, if you ever had, and this was as above, the closest you could get. The second wave of tribute acts included those bands that don’t exist because it’s very unlikely they ever will again (although never count anything out).

Such tribute bands included Smiths, Oasis and Stone Roses copyists. Finally we get to the point where there are tribute acts to bands that are still going strong , still recording, still releasing records and still touring – Coldplay, AC/DC and the Arctic Monkeys, to pick just three.

How on earth have we come to this point? A point where Alex Turner and his bequiffed band of troubadours are pounding the boards at the Stade de France, and on the same night, some look-a-likes may well be wowing a crowd in Leeds. Odd, how things turn out.

Why go to see imitators when you can see the real thing? It’s a fake Rolex turned into sound and vision, surely and in any event, it’s killing the real live music scene.

Before we sneer at all the tribute acts however, maybe we should consider exactly why they have become so all pervasive and popular. Maybe there’s something in there after all.

At the top, I mentioned all those tribute acts that were due to play at the O2 Academy. Although most of the original groups are extinct, you could still choose to try to see the Arctic Monkeys when they next tour. In a soulless concrete arena somewhere with tickets priced accordingly and having to be paid for months in advance. And they might not be any good – you might be disappointed and out of pocket with the whole thing. They’d more than likely run through their latest (and weakest) new album with a few hits thrown in just to prevent a riot.

On the other hand, you could probably just turn up on a whim to see the tribute act, pay maybe a fifth of what you’d pay to see the “real thing” (from a distance), hear all the hits and still have a pretty good time. And even if you don’t, then you’ve not lost that much.

This is not discounting all the groups you could see and have never been able to, such as Queen, Prince or Bowie, or those you saw and simply want to relive happier days-Oasis and The Smiths. The same sort of arguments apply but in different forms. It’s cheap and easy.

What about opening acts? Find out how they’re fairing.

The coincidence of the rise of tribute acts with the tightening of economic belts can’t be disregarded. Who can readily afford to see a stadium-size gig every month? Who would want to anyway? But you could run to a tribute act every four weeks or so, if you so wished. That wouldn’t break the bank. And you could still afford some chips on the way home.

Of course, we all know that the tribute acts aren’t the real thing. Despite the badly-punned names, we aren’t so easily fooled. You’re not going to get the same charisma and excitement that you’d get by seeing Morrissey in the flesh, in front of you-well, quite a way in front of you – at the MEN Arena, than by watching a look-a-like part time singer thrash a bunch of daffodils at the O2 Academy. But that charisma and excitement in itself costs a fair bit. (Standing tickets for Morrissey’s latest tour have gone on sale this week. £71. Very charismatic is our Steven.)

I suppose there’s the question of whether tribute acts are killing live music. A sort of home taping is killing music dilemma updated for 2016. We just don’t know if they are. We haven’t performed some economic test or analysed data and trends. But we would guess on those nights the venues are hosting tribute acts, they might well be closed anyway with darkened stages and nothing going on.

At least those musicians in tribute acts are in a position to get up on stage, play some music and bring a bit of cheer into peoples’ lives. Surely that’s what it’s all about.

This writer was talking to a work colleague a few weeks ago, who’ll readily admit that she’s not very much into music at all. She recently spent a day at a tribute festival with her partner and two children, watching such acts as Mentallica, State of Quo, Viva La Coldplay, The Extra Specials and Daft Punx.

‘Oh yes, it was great! Never been to anything like that before but it was a really good laugh. And it was cheap. Cost us less than a tenner to get in for all day!’

‘Already got one planned. And we might even go to a proper gig sometime as well!’