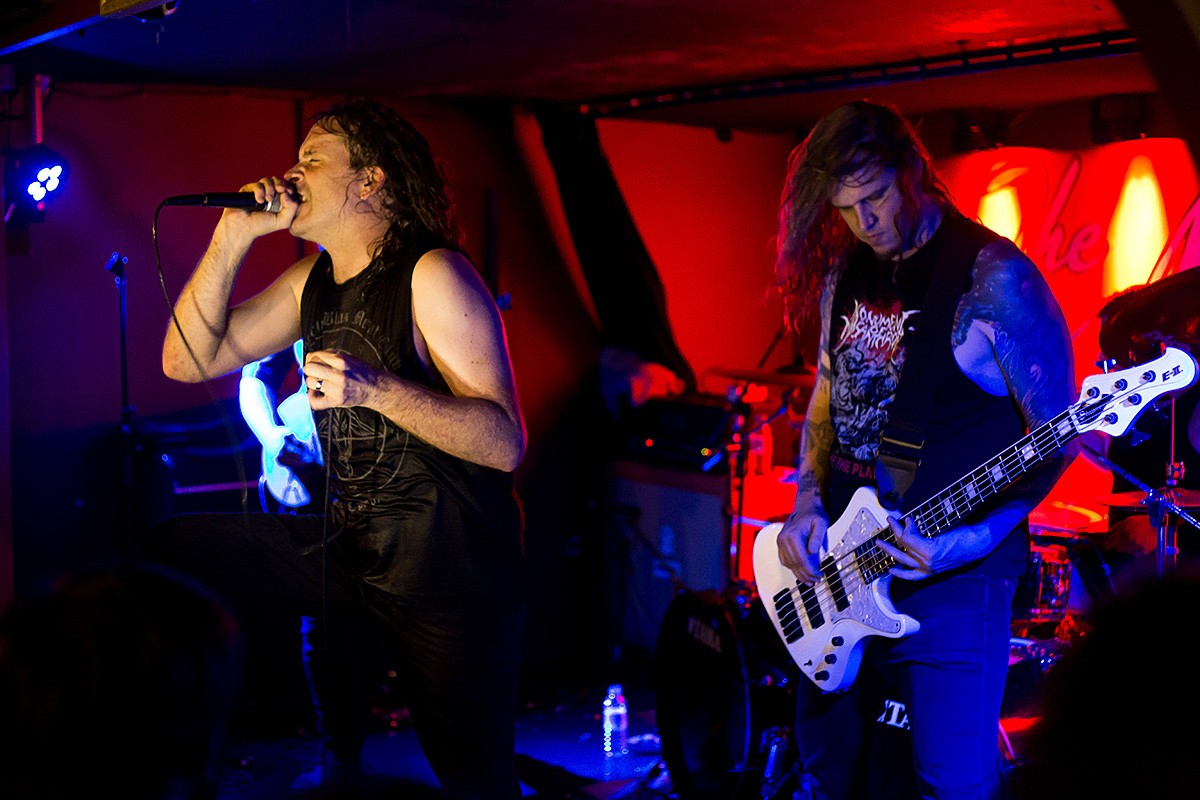 After a night packed out night of grooves and pig-squeals, Getintothis’ Mark Davies learns it’s possible can be both brutal AND vegan.

“First band’s on in five minutes!” a crowd-goer shouts to the metalheads accumulated outside Liverpool’s most unassuming live venue,The Magnet. It is half past seven on a Monday night, speaking volumes about the commitment and sheer dedication of the fans of metal. At no point is the day of the week a factor in whether this gig will be packed out or not, they are always going to be here to support the bands and the music.

That first band turns out to be none other than St Helens’ own groove metal masterminds Deified, bringing their own brand of heaviness to the table. These guys don’t waste any time and cut straight through the already thickening atmosphere with dual guitar attacks and vocals very reminiscent of Lamb of God’s Randy Blythe. Already, the gathered crowd make their way down into the Magnet’s cave-like structure to give the band their support and attention.

Heads are bobbing and horns are up in the air as they play a varied set of tracks taken from their 2015 debut album Ascension. The band’s enthusiasm is almost infectious, they are giving their all, and you can’t help but like them all the more for it.

Following Deified onto the stage we have Liverpool’s finest, Exhumation, here to hit us in the collective face with a slab of straight up death metal. With that definitive “scooped-mids” guitar tone, howling gutteral vocals and a brutal rhythm section, these guys can do no wrong. If we think Deified are groovy, Exhumation take it to the next level, and one step closer to the pits of hell. They may look young in the face, but this band play like veterans of the stage.

The guitars are completely locked in, and the band’s performance is airtight, but not without a bit of wiggle room, allowing their final track to feature a guest vocal appearance from Butters of the next band on the bill, Crepitation.

Read our gig guide for August.

And what a zany bunch of slam-grinding death metallers they turn out to be! Dual vocalists, one covering the weep-weeps and the other one giving his best grunts and gurgles, a virtuoso axe-grinder looking like a white Tom Morello, a master of the funk on bass, and a dread-headed drummer playing the smallest drumkit we have ever seen on a stage. On paper they sound like a mess, but in person it sounds like the good kind of mess, the kind you can’t help but become a part of, in some kind of horrible yet alluring, ritualistic fashion.

Playing tracks such as Nifty Whiff Thrift Biftas and Conceived in Harambefication, Crepitation are certainly one of the big highlights of the night, and one of the most balls-out entertaining support acts we’ve ever seen the likes of here at GetIntothis. They are as much of a sight to behold as they are a cracking band.

After a short break to allow the band time to set up, it is time for the main event. The excitement in the room is heady and palpable, the booze is and has been flowing steadily, and just as people are beginning get restless, Cattle Decapitation takes to the stage. With nineteen years of experience as a band behind them, they forthrightly proceed to destroy The Magnet, and all of its by now bedraggled inhabitants. Any reservations we might have about Travis Ryan’s ability to pull off the baffling range of vocal techniques found on their albums, are utterly shattered, and with effortless finesse.

It’s not only the vocals that blow us away either, the band excel live in every aspect. The thunderous drums are precise, technical and yet played with such flair, and the guitars respond in kind with razor sharp riffs and screaming solos. With some great crowd interaction, including every chorus spat out loud and proud, one very ambitious crowd-surfer, and a set list mixed with new and old material, it’s hard to not respect these guys. As they end their set, the band take a mandatory leave of absence, only to return swiftly after expectant calls of “one more song” to which of course they oblige and play fan favourite Plagueborne from their most recent full-length The Anthropocene Extinction rounding out the night’s brutal and blood-stained festivities. 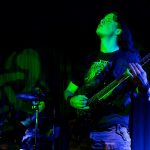 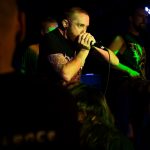 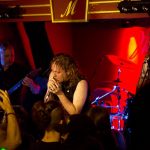 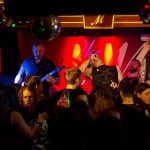 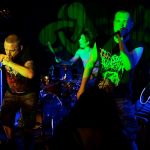 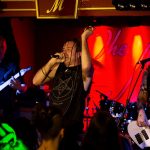 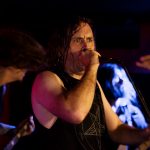 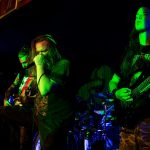