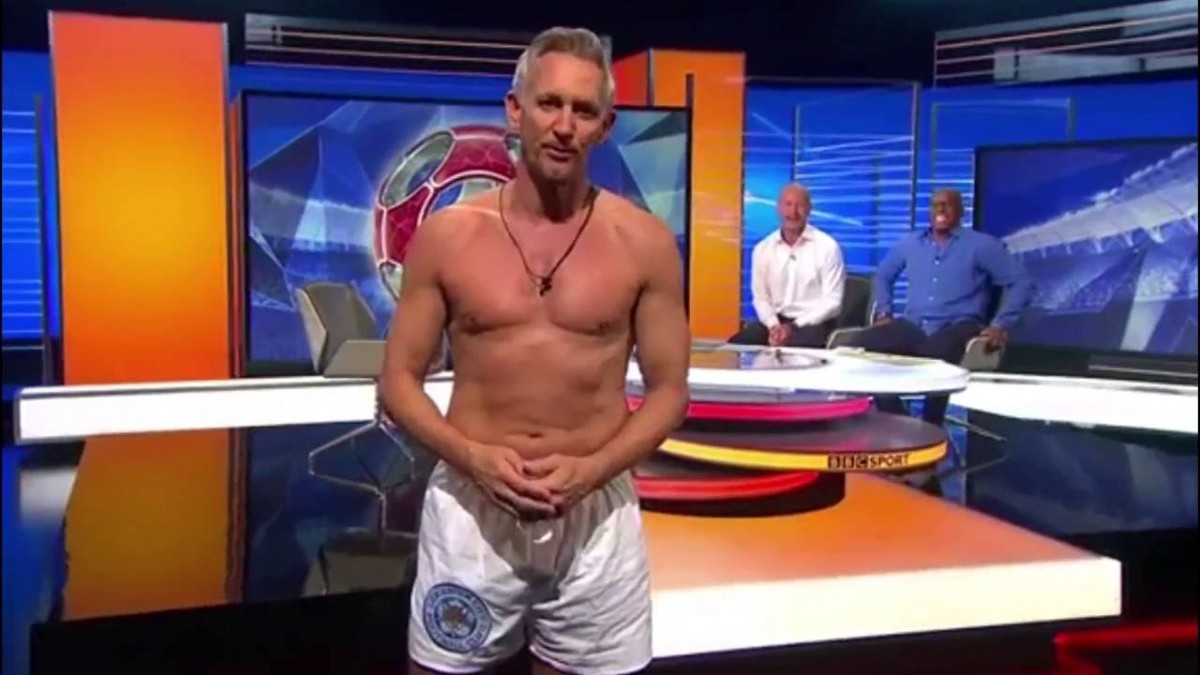 Gary Lineker is watching you

As we reach an Orwellian dictatorship where Gary Lineker is Big Brother, Getintothis’ Shaun Ponsonby predicts a radical uprising of oppressed non-football fans.

Dig if you will the picture – a world where everybody but you has a cult-like obsession with bananas. And I don’t just mean everyone likes bananas, I mean bananas are their life.

Every time you get into a cab, the driver insists on talking to you about bananas; different techniques to eat them, the best way to peel them, how they are shipped over from Caribbean and in-depth discussion about banana-based political trade deals. You try to explain that you have no interest in bananas, but they don’t care. They prattle on regardless. When you say you don’t know (or, indeed, care) who Mike Peed is, they look at you in disgust.

Whilst you’re growing up, you’re sitting in the living room with your dad, trying to tell him what happened in school that day. Except he is watching a documentary on banana production, and paying way more attention to it than he is to you. Once in a while, he trails off mid-sentence to yell obsenities at the screen because somebody has peeled the banana in a way he disagrees with, and he could have peeled it better with his eyes closed, despite being dangerously out of shape and having none of the necessary training to peel a banana at that level.

There’s a special section dedicated to bananas in the papers and on TV news, and yet often you find yourself scratching your head when they lead with stories about banana milkshakes. Why? With so much going on in the world, why is a story about banana milkshakes considered the most important thing that is happening? Why isn’t this in the banana section? It’s all bound to reach a breaking point after a while; bananas. BANANAS! MOTHERFUCKING BANANAS EVERYWHERE!!!

And this might give you a fraction of an insight into the life of somebody who doesn’t like football.

Liverpool is often seen as a city of football, so growing up as a non-football fan in a city that is obsessed with the game is often a completely alienating experience, especially for boys. I often make reference to my sad, lonely life. This is where it started. More than anything else, football is something men feel like they can talk to other men about when they don’t really know them. It’s an easy conversation starter for many. If there’s an awkward silence for about two seconds you can pretty much guarantee someone will blurt out “Did you see the match?”

People who do like football have no idea what it is like. You don’t. You really don’t. There is no equivalent. Remember how intense the coverage was for Brexit? It’s like that, except it doesn’t alter the circumstances of anybody’s lives and it never ends.

I don’t think I – or people like me – actively dislike the actual game itself, so much as everything around it. And I’m not even talking about the stereotypical laddish culture it inspires (though that is a major turn-off). It’s bad enough that they have taken your favourite programme off to broadcast something you hate, but they don’t just show the game. No, they have to precede it with an hour of build-up, in which people give expert advice like “They really need to win this one” and “Football’s a team game”.

Then they will interview the players and managers who, with a few exceptions, are probably amongst the most uncharismatic people in the history of broadcasting. I’m not even kidding. The vast majority of footballers come across as the dullest people on the planet. It’s pretty clear they don’t want to be interviewed, so let’s just stop awkwardly forcing them on camera like someone who has been kidnapped reading out a ransom note. I mean, at least those people show some fucking emotion.

Professional moaner Shaun Ponsonby often bores us silly with Cosmic Slop. You’re not getting away with it – click here and read them all.

The game itself – fine, whatever. Other than the odd irrelevant close up of someone like Olly Murs in the crowd (because, honestly, no-one cares that Olly Murs went to the game), I don’t have a problem with that in theory. In fact, sometimes it can be amusing to listen to all the unintentional euphemisms from fans who really should think before speaking. Just this week I heard people scream; “Just stick it in there“, “Get him off! Get him off!” and the pièce de résistance “All he had to do was stick it in his own end“.

But then comes the analysis. An astonishing 57 hours of non-stop waffle looking deep into the intricacies of 22 grown men kicking a clump of leather around grass. If prime time TV broadcast as much analysis of things that actually matter in the grand scheme of things as they do for sports, we probably would have solved all of our problems years ago. Sometimes ITV in particular show the game, put the news on, and then show highlights of the game they have just shown right after.

And it’s not just analysis. It’s like a Christopher Nolan film, where every line of dialogue is delivered like it is the single most important sentence you’ll ever hear in your life. They analyse the shit out of it like NASA have made an important scientific discovery, and then they build up the next game as if they were two world powers going out to war. Meanwhile, the only regular shows that put music on in prime time are bollocks like The X Factor.

In a not unrelated move, I was constantly disappointed as a child when BBC 2 would take off The Simpsons for golf, and right now I can’t watch my beloved BBC 4 music documentaries because they’ve taken them all off for the Olympics, despite the presence of the red button now making the need to broadcast it on all channels completely obsolete.

I’m not a religious man. Far from it. But one day, in the middle of a large sports tournament, I fell to my knees in a sea of tears and prayed – actually prayed – that a continuity announcer would say “In a change to our published schedule now, we are not going to show that bloody silly football game, here’s The Simpsons instead. So, there! How do you like it, bitchaz?” There are times when it is so omnipresent that I have actually wondered if we have reached some kind of Orwellian future, where the bloke from the Walkers crisps commercials is Big Brother, and Michael Owen is O’Brien.

And for some reason, because I have an admittedly barely visible penis, I am expected to like it. Constantly having bona fide football fans making rash assumptions. “The only reason people don’t like football is because they’re shit at playing football” they bellow, as if this is some kind of deep analysis. That’s like saying the only reason people don’t like AC/DC is that they can’t play guitar. Does it not enter your mind that it might possibly be the other way around? That maybe the reason some people are so spectacularly terrible at playing football is a total lack of interest in it? You know what I did in PE lessons? I stayed the hell away from the ball, got bored and did Angus Young-esque duckwalks around the pitch to stay warm.

Was it always this way? Before all the money was pumped into it, was it this intense? Did the losing fans bawl uncontrollably into their clenched fists and stay in a bad mood for 3 days back when it was a group of gentlemen in moustaches and long johns? Was it a full-on attack on the senses for people whom – for all intents and purpose – couldn’t give less of a frig?

It’s not even just current games. Remember when England won the World Cup in 1966 and achieved nothing else for 50 years, but everyone still banged on and on about it for decades? It was the 50th anniversary of this win a few weeks back and amongst my favourite bullshit, barrel-scraping, non-articles – few of which appeared to be in the sports sections, incidentally – included one from the BBC which read; “A couple who married on the day England won the World Cup in 1966 said they were unaware the match was taking place until the vicar mentioned it.” Fascinating insights there, I’m sure you will agree.

There was also The Guardian’s riveting question “What if England didn’t win the 1966 World Cup?” The answer, of course, is that everything would be exactly the same, except Bobby Charlton wouldn’t have a knighthood. A local newspaper in Newcastle did the classic “shoehorn a local angle” trick with “The Newcastle man who was at the ’66 World Cup final“. Just think about what that headline boils down to; “Man was at football match 50 years ago“.

Basically, football – and sport in general – keeps putting its ugly mug where it doesn’t belong, and for years non-sport people have been punished and abused by the sport masters with cleared TV schedules, non-stop chatter and all-round omnipresent face rubbing.

Can’t bear the Olympics? Doesn’t matter – every single product in the country sponsors Tom Daley. Loathe the World Cup? Tough, because each advert and billboard is going to piggy back on your assumed football-based patriotism. Trying to avoid Euro 2016? Well, you can just about get fucked, because even as you are reading the music news, you’re going to hear about a load of invariably awful unofficial Euro 2016 anthems. And don’t even think about going to the pub.

I’m telling you, one of these days there will be a radical uprising, where people who have been force fed a life of unwanted football association will take back the controls and banish all football talk to the already designated footballing areas. We will enforce a limit on the amount of times the schedule can be cleared for games. Footballers will not be allowed to advertise products. Any analysis must be appropriately lengthed. It will be illegal to expect footballers to be role models. And, of course, there will be a pay cap.

I genuinely hope all football fans thoroughly enjoy the new season. Just please, for the love of God, stop forcing it down our throats.

According to Victoria’s Deakin University, going to gigs makes you happy. And there I was spending all that money to fuel my self-loathing.

Jeremy Corbyn failing to recognise Ant & Dec kind of makes me jealous of him. Think about it – a life where you have never watched Britain’s Got Talent or I’m a Celebrity. Bliss.

Ozzy Osbourne has responded to a lawsuit from his ex-bass player Bob Daisley as “tantamount to harassment“. Surely I am not the only one to question whether this is an actual, direct quote?

Turns out that Adele agreed with me in regards to her playing the Super Bowl. Good! I’m making a difference.