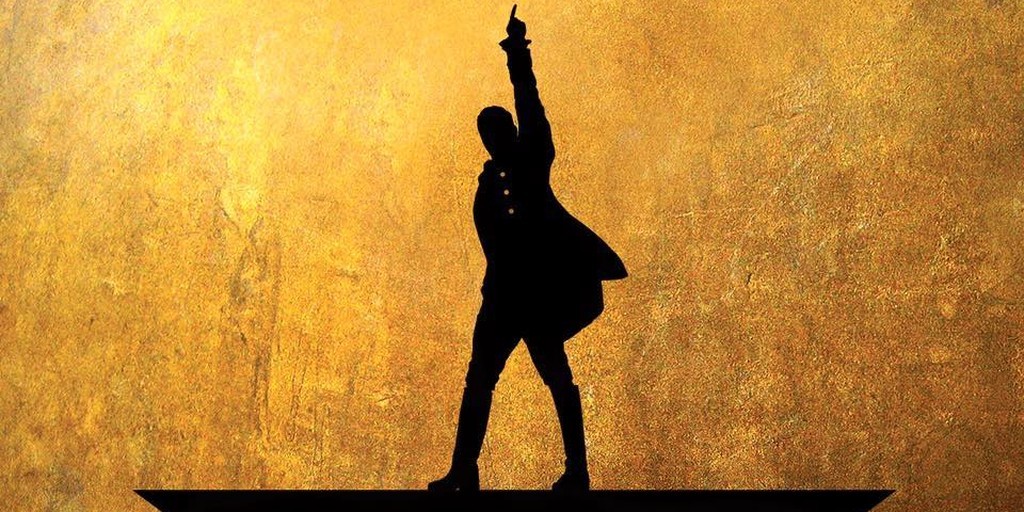 With the most talked about musical on Broadway coming to the UK, Getintothis’ Jessica Borden takes a look at the connections Hamilton: An American Musical makes with modern life.

My sisters’ unabridged adoration of Broadway and theatre in general means I have spent the majority of my life watching plays I had never heard of, in an actual theatre or a recorded version. I’ve listened to soundtracks to musicals so many times that it probably explains why I feel the need to burst into song so often from Grease to Hairspray, Les Miserables to Chicago. But for some reason, I never list these musicals when I talk of my love of music, in my mind it’s completely separate for a reason unknown.
The latest gift of music to me was the greatly hyped Hamilton and at first I would just listen to the odd song and say it sounds cool and it’s so different to anything that has been on a stage before. Then I found myself listening to more songs and on repeat, and then wandering around rapping along to the verses, and all of this is just from the cast album and the odd clips found on Youtube

Hamilton is the Broadway musical based on the life and work of Alexander Hamilton, one of the founding fathers of America. From fighting  in the revolution for American independence to creating  the financial system of America, all whilst doing more in 24 hours than any other human. The use of Rap and Hip hop throughout Hamilton as the main genre of music is essential, it opens the Musical up to diversity of casting straight away whilst allowing the songs to contain vast amounts of information in quick and intelligent raps such as Guns and Ships and Cabinet Battle #1, which takes the form of a rap battle between Thomas Jefferson and Alexander Hamilton.

The opening track Alexander Hamilton, is an incredible feat and demonstrates why Rap is so essentially brilliant for this story, the pace and diversity in language which allows for the poetic to be added to history. Within three minutes 56 seconds, the entire play is summarised along with the summary of Hamilton’s character.

How does a bastard, orphan, son of a whore and a
Scotsman, dropped in the middle of a
Forgotten spot in the Caribbean by providence
Impoverished, in squalor
Grow up to be a hero and a scholar?

The opening verse, shows the entire character a folk hero and an underdog, the man that rises from nothing to be everything. The original working class hero, through pure determination overcame the names he had thrown at him in an attempt to belittle, but ended up only as motivation to prove himself.

The use of rap and hip hop is purely genius for this story, it encompasses all the things that rap and hip hop have always been about. A story of rising above your means and station to prove yourself, a story about fighting against injustices and oppression just as N.W.A and Public Enemy did (to name a few) and it is a story of writing your way out of your circumstances to escape the poverty and hardships of life just as so many artists did.

Further on, throughout the show, characters such as Hamilton and Lafayette, are described as Immigrants, often in Hamilton’s case it is used as a derogatory statement that it somehow makes him less than the other founding fathers.

This makes it feel as if Hamilton is also attempting to prove himself as a ‘True American.’ Which is surely the same thing in the idea of America being founded by Immigrants from around the world. Hamilton literally used his incredible intelligence and wrote himself out of a situation and made himself into a Founding Father. Lin Manuel Miranda took the word “Immigrant” and made it a word to be worn as a badge of pride, Immigrants, we get the job done.

The idea of proving himself becomes more prominent and obsessive throughout the musical from his actions, of his desire to fight in the revolution to clearing his name (and ultimately destroying his marriage) he is consumed by constant opinion of others. As any young person, specifically, understands, the constant battle to show people that we can do everything our peers or parents or teachers thought we couldn’t even with what right now seems like all odds are against it. Sometimes proving what you can do to yourself, is worth more than proving to others what you can do.

This is baffling that a play that is set from 1776 – 1800 still shows the same issues we face today. The idea that where someone is from/the colour of their skin is still constantly used to belittle them is terrifying, and makes absolutely no sense to me that it is still happening. The necessity of Black Lives Matter marches to the protests against Brexit and all the while the world seems to have spun itself back in time as we see images, marches and speeches which resemble that of the 1960’s. 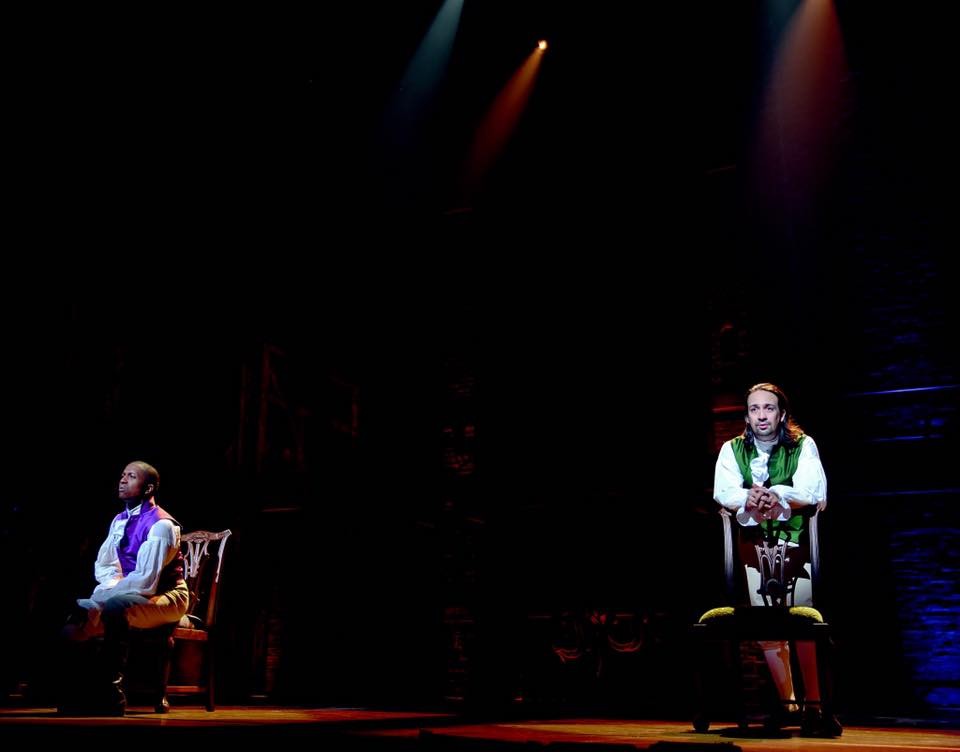 Hamiltons’ last line in Aaron Burr is If you stand for nothing, Burr, what’ll you fall for?, This seems almost too fitting for right now, and yes this is going to mention Brexit every now and again, People not voting and people running away from the idea of working together and into the idea of pushing anyone different out, is showing what so many people fell for, whether it is knowingly or naively.

The “you against them” idea has been a political running speech since the beginning of time and that speech has never been true and it has always been a scaremongering tactic. But once again this seemed to be accepted as a reliable stand point (which it isn’t) whilst being shocked that politicians were lying …any one got £350 million knocking around?

It is does appear strange how everyone seems shocked at lies and false promises after so many years of stating how corrupt politicians are.

The anger and uncertaintiy of how to better the situation hovers throughout every room, so music is the only escape or in this case a wake up call. The track My Shot, repeats the verse

Hey yo, I’m just like my country
I’m young, scrappy and hungry
And I’m not throwing away my shot

That Friday morning finding everything out from the referendum results to the PM quitting to the pound swan diving in a fashion any ballerina or Diver would be proud of, a PM nobody actually voted for (Theresa May), the Labour party self imploding to get rid of the leader the people wanted and chose. Disheartened and angry, exhausted in the hurricane of a mess that surrounded us.

Hamilton fought an entire revolution against a king that the people didn’t choose to rule over them. Maybe this is me just seeing strange connections because I need to see comparisons to find answers but maybe it is art imitating life or the other way round. This chorus needs to become an anthem for people praying for change and willing good to happen.

“And I’m not throwing away my shot” has become stuck in my mind, the idea that this is “not a moment it’s the movement” that needs us to stand up and fight for what we want, love and believe in. Yes, we need to take care of our country and the people in it but that doesn’t stop the obligation we have to help people outside of it. In the words of Angelica Schuyler, “There’s someone in your corner all the way across the sea”. This is the time when people need to stand up for what they believe and to stand up for the people that need your strength. To support the movements such as Black Lives Matter and NHS and anyone in need of help in a time where all news and social media is telling us is how much darkness is around us.

As I am writing this I am realising it is becoming more and more like I am going through the entire cast album, and with 46 tracks, I think stopping that layout before it gains more momentum is a much wiser choice. 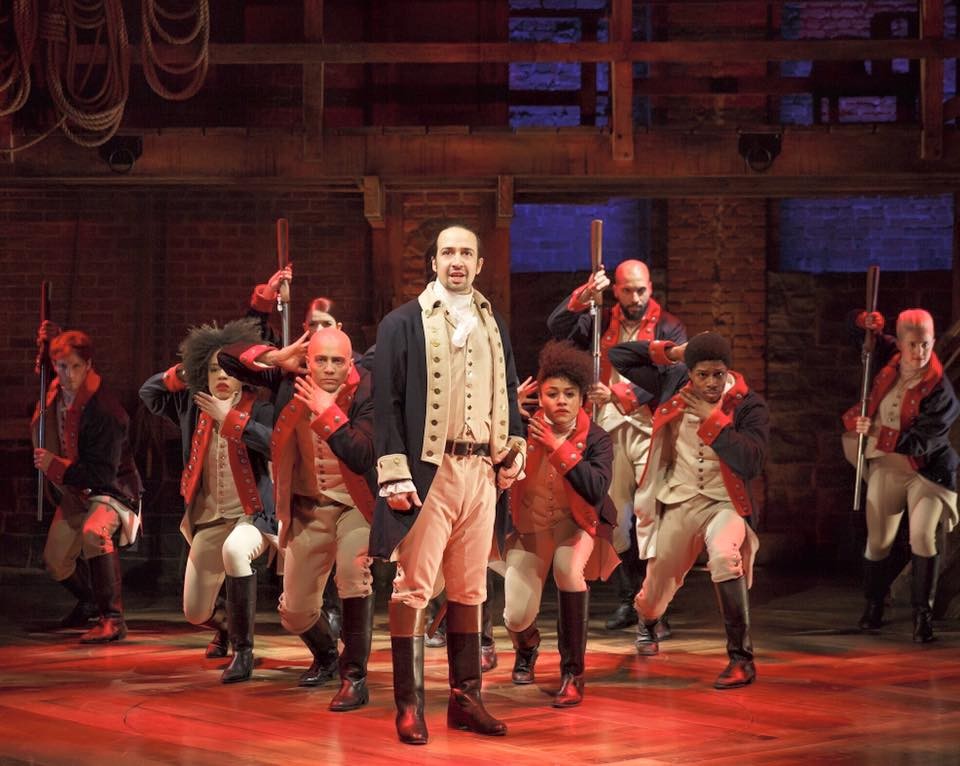 The Battle of Yorktown (Taken From The Official Facebook Page)

During Wait For It, Aaron Burr sings;

The idea of legacy is essential to the characters of the play, and people in everyday life. What legacy you want to leave behind informs what decisions you make and in turn it creates a legacy for you. In a later song, Burr sings “what is a legacy? it’s planting seeds in a garden you never get to see”. Which continues the ideas from the entire musical, of everything we do and that we leave behind isn’t for us, it’s for the next generation and that is where the responsibility to act courageously comes into play (pardon the pun).

The UK as a country has always been obsessed with it’s legacy and it’s past, clinging to former ‘glories’. Legacy should be a thing to hold yourself accountable and make yourself better not a cop out, to do some horrific things that would have been acceptable a hundred years ago.

In History Has Its Eyes On You, Washington addresses Hamilton in a letter to get him back to the last battles of the revolution and in this letter he gives the wisdom of

You have no control:
Who lives, who dies, who tells your story.

No matter what happens there will be a million different accounts of events. The idea that history will know what happened through most probably only one ‘accurate’ account, should strike a fear into the hearts of people, to act with love and not out of hatred, because history doesn’t remember those who acted out of hatred kindly.

There are many more points from this album/soundtrack/ musical that could be made for it’s connections to our lives right now, and that is important and it’s what great art does it dives into your soul and makes you feel alive and connected to the world even if it isn’t one near you. In this time of uncertainty of futures and the entire government seems to be crumbling around us, but art and music and life still goes on and I believe they are the pillars I cling to in my time in need of hope.