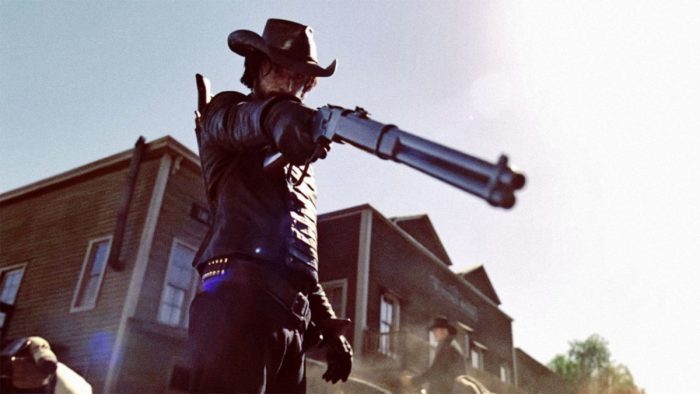 As cinematic TV such as HBO’s Westworld continues to keep audiences indoors, Getintothis’ Laurence Thompson asks is it really as amazing as we’re led to believe?

HBO‘s decision to take bizarre, forgotten, not-even-cult 70s sci-fi thriller Westworld and update it for a modern television audience sent a clear cross-media message to movies: anything you can do, we can do better.

Hollywood execs had suffered at least three aborted attempts to update Westworld for the 21st century, and Warner Bros still had the project on their books as late as 2011, but it was left to the now-omnipotent egregore of cable networking to finally bring this oddball cultural Frankenstein to life.

But is this minor victory indicative of a shift in the wider culture? Has the showrunner-driven, writing-room era of the no-longer-idiot box caused television to supplant the movie as our dominant artform, just as cinema in turn toppled the novel, which succeeded the stage play, and so on and so forth back to the time of the epic poem? Has film’s mere 100-odd year reign at the top of the superstructure come to an end?

That we’re living in a golden age for television now will come as a surprise to anyone who remembers the small screen masterpieces of Dennis Potter, Alan Bleasdale and Jimmy McGovern from the 70s through to the 90s. It seems to us there was more percipient analysis of power and politics in ten minutes of I, Claudius than ten hours of Game of Thrones, and Yosser Hughes would have butted the fuck out of The Walking Dead. But then, we Brits would say that, wouldn’t we?

And anyway, it’s not the Telly Renaissance, but the TV Renaissance, which tells you we’re dealing with a strictly American phenomenon (Okay, Nordic Noir we’ll grant you, but that feels like its own thing). What’s more, we might be at the tail end of it: as good as Stranger Things, Mr Robot, Narcos and The Night Of are, they are hardly the world-shaking, time-devouring behemoths of yesteryear. For most of the “just one more episode before bed, dear” devotees, The Sopranos, The Wire, and Breaking Bad remain the Holy Trinity, with no foreseeable challengers on the horizon.

These three in particular, which made their respective débuts in ’99, ’02 and ’08, increasingly feel of their own stature and of their own era, the Three Graces of American popular entertainment. What they did was lay the groundwork for Millennials to be first the box-set generation and then the Netflix generation. Pressing play for the next episode and staying in the same world with characters you’re already invested in is so much easier, less risky and less potentially jarring than picking out a film and having to reboot all your allegiances, especially if the acting, writing and production values aren’t necessarily going to be significantly higher these days. In fact, it’s arguable that the popular Marvel series of movies are an attempt at reproducing this lazy-viewer-affect for the big screen.

But this doesn’t necessarily mean the medium has caught up artistically.

What’s interesting about the great BBC dramas of the past is they remained writer-orientated where cinema was director-orientated. We watched Pennies From Heaven because Dennis Potter was writing it, not because Piers “The Blood on Satan’s Claw” Haggard was directing it. There was always an unconscious suspicion that a good television writer is actually a playwright in the wrong biz. Auteur theory, however, ensured the director is forever credited as the overarching creative intelligence behind a movie; unless you’re Dalton Trumbo, J.C. Chandor, or Paddy Chayefsky, your movie screenplay is likely to be regarded as artisanal rather than artistic, no matter how good it is.

The consequence was that American cinema became a more consciously visual medium. Taking advantage of the power vacuum resulting from the collapse of the studio system of the previous Classic Hollywood era, the enfants terrible of Stateside film in the 70s took techniques from 60s Nouvelle Vague auteurs and remixed them into the grime and glamour backing tracks of New York and LA to create a distinctly American aesthetic art – think Scorsese‘s Taxi Driver or Lumet‘s Dog Day Afternoon. Once-in-a-lifetime visionaries like Kubrick took it a step further, using paintings of Wattaeu, Hogarth and Gainsborough as a reference for Barry Lyndon’s look.

Of course, film is as much of a collaborative process as television – as Orson Welles once said, it takes one man to write a novel and an army to make a movie. It didn’t hurt, for instance, that all this coincided with a generation of talented, dedicated and innovate photographers and cinematographers, like Gordon Willis, John Alcott and Vittorio Storaro.

But the point remains that television, as much as it can contain great shots (think the Leone-esque desert photography in Breaking Bad, or the snowy Coen-cued visuals in Fargo), it’s never about great shots. Although it features great acting, it’s rarely about great acting. And as much as it can contain great writing, it’s never about great writing as much as it’s about compelling storytelling – most shows, even exceptional ones, develop towards a crescendo of wham lines or memorable moments. And contrary to the writer-as-auteur model of British drama, the writer’s room set-up of American cable TV further dilutes the creator from the creation.

With one or two possible exceptions (70s German programme Berlin Alexanderplatz and late 80s Polish drama Dekalog – both the brainchildren of filmmakers), there has never been a sustained attempt at raising television as an artform. There exists no television show with the grand macroscale of 2001: A Space Odyssey, Lawrence of Arabia, or Intolerance, and nothing that can match the intricate psychological drama of M, The Passion of Joan of Arc, or Raging Bull. There’s nothing on the small screen as frightening or affecting as Come and See, The Shining, or Antichrist. Furthermore, because television is wholly reliant on the broadcasting capabilities of a studio and the whims of a producer, there isn’t the scope for idiosyncrasy and experimentation found in the works of Jack Smith, Kenneth Anger, or David Lynch (his Twin Peaks, while weird and mind-bending, doesn’t push the confines of its medium as Eraserhead or INLAND EMPIRE do) – when Bryan Fuller allowed his directors to indulge their avant garde sensibilities in Hannibal last year, the show’s audience walked and the network closed it down.

In short, television is pop, but film is classical. And when it isn’t classical, it can be free jazz.

Which is no bad thing – who wants to listen to classical or jazz all the time? All we’re saying is movies and telly are for different things. We’ve no doubt HBO‘s Westworld will be more competent and watchable than anything Hollywood would have done with it, and its ratings may contribute to the continuing decline of cinema ticket sales – but just don’t expect the next Tarkovsky, Dreyer, or Pasolini to sign for AMC any time soon.