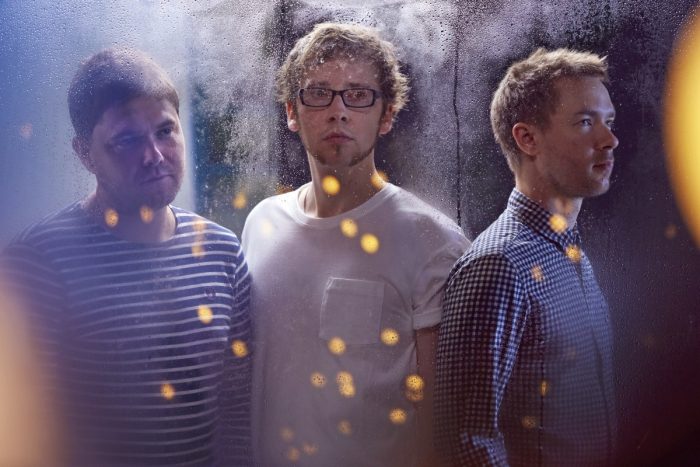 Mancunian jazz trio GoGo Penguin have created a modern masterpiece with their Man Made Object album on Blue Note, Getintothis’ Del Pike chats to them prior to their Liverpool Music Week gig.

Liverpool Music Week 2016 promises such an eclectic range of music this year that we should literally whip ourselves back into a humble state before enjoying the embarrassment of delights on offer.

As those autumn leaves fall however, imagine the perfect soundtrack to that golden vision. Metronomic beats, cascading pianos, atmospheric strings, a nod to New York jazz from the past with a Mancunian eye on the future. That could only be GoGo Penguin then.

Jazz is most definitely their chosen route but as they state on their website, they are also partial to being recognised for their ventures into classical and electronica.

GoGo Penguin first came to our attention in 2012 with their debut album Fanfares in, a mix of Bonobo style bleeps, Baltic Fleet rhythms and more traditional jazz phrasings. Relaxing moods often turning into almost frenetic Jazz Warrior crescendos, it is an album of many characters.

Their 2014 follow up V2.0 continued in that same impressive fashion and earned the three piece a Mercury nomination. Deservedly so.

In perhaps the strangest twist of fate, the band signed to the legendary Blue Note label in 2015. Blue Note being home to such legends as Art Blakey, Jimmy Smith, Herbie Hancock, John Coltrane and Miles Davis. Some shoes to fill.

Their first release on the label, Man Made Object has provided some of the most beautiful sounds to be heard this year, and there is a real sense of development with much more experimental tracks and a couple of remixes thrown in.

Their appearance at The Arts Club on Nov 1 has to be one of the must see events on the Liverpool Music Week calendar. In anticipation of the event, we chatted to pianist Chris Illingworth and enquired as to how they are handling life on the world’s most celebrated jazz label.

Getintothis: So you’ve bagged a deal with Blue Note, does it get any better than that? How does it feel?

GoGo Penguin: “Even though it’s a while now since we signed the deal we still can’t quite believe it. It just seems crazy, three guys from the north of England signed to a label like Blue Note. They’ve got an incredible history and it’s great to be able to become a part of that. We’re very thankful that the guys at Blue Note saw something in our music and took us on board.”

Getintothis: What kind of doors is this going to open for you?

GoGo Penguin: “Blue Note has a massive reputation as a label and their reach is worldwide so we’ve already started to see how they’re able to get our music out to people further afield. They’ve been very supportive since we started working with them and have let us continue making our music the way we want. We’ve been really fortunate to be able to visit and gig in a lot of new places since Man Made Object came out and hopefully we’ll be able to continue to travel and play our music to fans and new audiences.”

Music aside Blue Note also have a reputation for having some of the most breath-taking album covers in the history of recorded music. Sepia tinted studies of the artists at work, or breaking out onto the streets of New York. John Coltrane‘s Blue Train, Hank Mobley’s No Room for Squares and Art Blakey’s Moanin’ still demand attention, screaming from the record stands. Each one an unrivaled classic. We had to ask…

Getintothis: Did you not feel tempted to go for the classic Blue Note sleeve approach?

GoGo Penguin: “No, not really. Blue Note have some really iconic covers for many of their records but we needed something that reflected us and our music and I don’t think the traditional Blue Note sleeve would have done that. The label were excited to sign us as we’re doing something new that fits within the world they’ve developed over the years and the cover art, as well as the music, had to express that; the record is a new part of their history that reflects who we are as a band at that particular moment in time.”

In fairness the album art is sweet, looking not dissimilar to Peter Saville’s work with New Order.

Getintothis: Are you trying in any way to subvert the jazz scene or do you feel you travelling a well-worn route?

GoGo Penguin: “Neither. We’re not trying to subvert anything and we’re taking our own route. All we’re doing is making the music we want to make, music without unnecessary rules and limits that are easily created if you spend time trying to avoid or fit within labels. We keep open minds to ideas and influences but don’t let anything restrict us when we write together. If there are boundaries or constraints when we write they are there because we put them there, they’re not from the outside being imposed on us.”

With the more experimental and upbeat sounds on Man Made Object, we wondered where those influences were coming from.

Getintothis: Do you come from jazz backgrounds primarily or do you hail from more dance orientated roots?

GoGo Penguin: “We’re all from different musical backgrounds; I started out in classical music, Nick in jazz and Rob’s background is more a combination of the two although we’ve all played and listened to many other styles since we were young. Dance music and electronica have been big ones for all three of us. We all have our own individual tastes but find overlaps and common ground and I think it’s this mix that really contributes to making the band sound the way it does.”

Getintothis: Who has inspired you and who do you feel most akin to in contemporary music?

GoGo Penguin: “The list of musicians who have inspired us could go on for ages but we all share some favorites like Jon Hopkins, Aphex Twin, Bjork, Squarepusher, Amon Tobin and Radiohead to name a few.”

Getintothis: What’s coming up next for the band?

GoGo Penguin: “We’ve finally got a bit of time off from touring so we’re starting to write and develop some new ideas for the next album, then in November we’ll be starting our UK tour and then heading round Europe for some dates before Christmas.”

Getintothis: Is it important for you to gain success Stateside, particularly as your label is a true American icon?

GoGo Penguin: “It’d be crazy to say we don’t want to be successful in the US, we had a lot of fun on tour out there earlier this year, starting at Coachella in California and then gradually making our way East playing a load of great cities. The response was really great so hopefully we can keep adding to our fans when we head out there again next year.”

Getintothis: Are you looking forward to visiting Liverpool again?

GoGo Penguin: “Definitely. We’ve only played in Liverpool a couple of times but the crowd and atmosphere has always been great, I’m sure it’ll be a lot of fun!”

GoGo Penguin will play The Arts Club on Nov 1 and tickets are available now from the Liverpool Music Week website.

Check out their site for all other events.