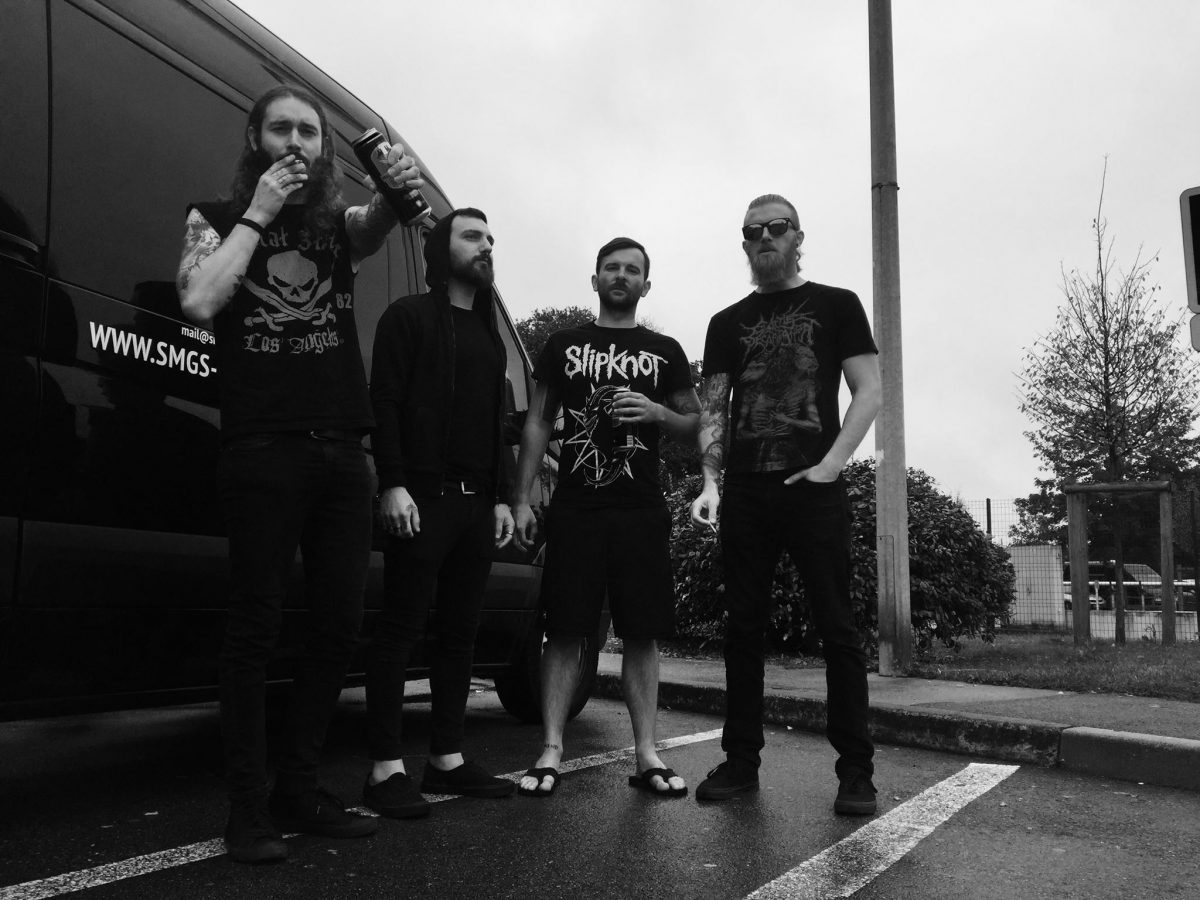 As the days darken and the cold sets in, Getintothis’ Mark Davies felt it was apt to explore the latest offerings in the grim and frostbitten realms ov Black Metal

Winter is fast-approaching, we can feel its deathlike grip tighten around us, and we’re in that horrible middle stage where you are trying desperately to avoid everything Christmas related, but it’s too late to get your hands on a spicy-cinnamon-pumpkin-autumn-pastel-vanilla-chai-latté any more. The skies are grey and trees are bare, the wind howls, but luckily for us, what better way to celebrate the incoming birth of the lord and saviour than by warming your hands in the innards of a sacrificial goat, and getting toasty by the flames of a burning church?

Since it’s (contested) inception in the early 1990s in the bleak hinterlands of Oslo, Norway, Black Metal has had a very volatile history, really, how could it not? Ideologically, the scene was created as the very antithesis of Christianity and all organised religion. When asked, bands involved in the scene would typically say that their goals were to spread hatred, sorrow and evil, and the music that spawned from these bands such as Mayhem, Burzum, and Emperor, truly embodied these ideals.

Sonically speaking, you can hear tremolo-picked open guitar chords, frantic drums, often-inaudible bass (if the band even had a bass player), and shrieked vocals, all recorded on what to unfamiliar ears sounds like a tape recorder inside of a garbage can; Lo-Fi in other words. On paper, it sounds like a mess, but to those involved in the scene, the low-fidelity represented authenticity and originality, and the rejection of all things mainstream, allowing the scene to retain its exclusivity, all the while enticing more followers to the cause.

Several church burnings, murders, arrests, and suicides later and it seemed as though Black Metal had reached the end of its lifespan, it had peaked, the flame that burns twice as bright and all that. Most of the bands had either sacrificed their ideals to become mainstream and successful, lost members to murder, suicide or prison, or simply returned once more to the darkness that first bore them. Or so we thought, but as it turns out, the Trve Kvlt spirit of Black Metal is more resilient than first presumed, and has continued to thrive and evolve, in unexpected places and ways.

Not only are there more active black metal bands now than ever has been, one glance at the metal charts on Bandcamp will tell you exactly that, now there are scenes throughout the world including Iceland and even Palestine. The sound itself has been spliced together with genres such as folk, post-metal, shoegaze, and the avant-garde to create new and original sounds that still maintain the allure and power that earlier bands created. It’s the same picture, just painted with a newer and wider palette.

Now, we’re fairly certain that the original founders of black metal wouldn’t take kindly to this, what they would likely consider “watering down” of the sound they pioneered, but then, the logical extension of their blinkered world-view also led to the creation of the current Nationalist Socialist Black Metal, or NSBM scene which is essentially a collection of white supremacist and neo-nazi black metal bands, espousing hatred and intolerance, so maybe taking the blinkers off isn’t such a bad thing after all. It should also be noted that these NSBM bands are fortunately only a small, though vocal minority and certainly don’t represent Black Metal as a whole.

Moving forward to November 2016 then, we find ourselves with a plethora of new and exciting black metal releases all with a wildly different take on what the genre means to them, whilst still bearing the (inverted) cross for all to see.

Cultes Des Ghoules – Mischief, Mischief, the Devilry Is At Toil (Under The Sign of Garazel Productions)

Up first from Poland we have Cultes Des Ghoules, whose namesake is borrowed from a fictional occultist text found in the writings of H.P. Lovecraft. Coven, Or Evil Ways Instead of Love (Under the Sign of Garazel Productions) is the 3rd full-length release from this group, yet still nothing is known about the members, their history is shrouded in secrecy, and this only serves to make the music the focal point. Equal parts theatrical and ghastly, the album is an epic ninety-eight minute long, double-disc black metal play in five acts, with its very own dramatis personae all voiced by the band themselves.

A Black Metal satanistic play? It honestly has to be heard to be believed, but they really do pull it off. The genre just lends itself to theatrics so easily, almost too easily in fact causing the problem of sometimes not knowing how seriously it should be taken. Normally we’d advise the opposite here at Getintothis, but in the case of all things Black Metal related, we suggest you take it completely seriously unless a nice man in corpsepaint tells you otherwise. This also has the added bonus of helping you to really immerse yourself in the music, to experience it, and in the case of Cultes Des Ghoules, you can find no better place to lose yourself than in this stunning and expansive nightmare. Though markedly different in terms of sound, we can’t help but draw comparisons with Behemoth’s 2012 release The Satanist, at least in terms of how the album is so well crafted, as if listening to it is an arcane ritual in and of itself.

The track featured here is the second act of the play, and it becomes quite clear from the outset that the organs only serve to lull us into a false sense of security. Before long, without warning, the track kicks into a grinding sabbathian groove, whilst the various characters shriek and howl, sputtering satanic verse and incantations. Production-wise, the track (and the rest of the album) isn’t too “over-produced” (by Black Metal standards), giving it heaps of authenticity, and emphasising the occultist vibes.

Next up and in more of an atmospheric and ambient iteration of Black Metal, we have the Netherlands’ Urfaust, though for this track and many of the compositions on their latest release Empty Space Meditation (Ván Records), the ambient elements are really pushed to the background in lieu of a much more relentless and powerful sound. Screams and tortured moans dominate this track from the very beginning, along with crashing blasts of drumming, space-like synths and tremelo-picked chords.

The track then gives way to a slower paced, clean sung section, full of power and groove, as the vocalist’s almost yearning lyrics add a new depth of sorrow to the already overflowing composition. Standout stuff from Urfaust here, and not one to be missed.

November has truly been a blessed (or should that be cursed?) month in terms of stellar releases with a new album from French Avant-Garde black metal pioneers Deathspell Omega, formed in 1998, The Synarchy of Molten Bones (Norma Evangelium Diaboli). This is a band that demands repeated listens, there is no other way to truly absorb everything happening within their tracks. Almost a kind of harnessed chaos, like someone tried to restrain a demon but got dragged down to hell along with it. The musicianship on display here is truly awe-inspiring as much as it is also unrelenting and unforgiving.

Originally unsure of what direction the band would take after completing their much heralded Trilogy of albums, it is good to hear so much originality and depth of composition here, and you can be sure that the rest of the album bears much more of the bands special brand of chaotic devilry.

Black metal has always had elements of paganism at it’s heart, with bands really trying to return to their countries roots and using it’s folklores as fuel for creative inspiration. With that in mind we bring you the brilliant one-man Scottish black metal band Saor, spearheaded by mastermind Andy Marshall. The bands 3rd and latest release Guardians (Northern Silence) is shaping up to be a fantastic slab of evocative celtic strength and wonderment.

One listen to standout track The Declaration and already we are packing up our city-based lives and getting ready to answer the band’s call to live out our days in the mountain forests. Use of bagpipes, fiddle and bodhrán are a given on the album and used to full celtic effect, whilst the blasting drums, relentless guitars and shrieked vocals fulfil the black metal criteria. Saor have been brewing something special and we can’t wait to hear the rest.

Rounding out the month we have a crustier and sludgier take on Black Metal with German post-black metallers, Downfall of Gaia bringing us their latest full-length, Atrophy, out on Metal Blade Records. The band pulls no punches here, using their black metal arsenal to evoke that familiar sense of claustrophobic despair with a slow and heady intro riff slathered in reverb, before the punishment really begins.

The atmosphere is so incredibly thick here in our chosen track Ephemerol, with layer upon layer of stacked guitars, and plenty of aggression to boot, it is hard to ignore these guys. Fans of Wolves in the Throne Room and earlier Alcest will find much to enjoy here, and if Black Metal could be considered accessible in any way, then this a great place to start with its modern and clear production. Get onto these guys.