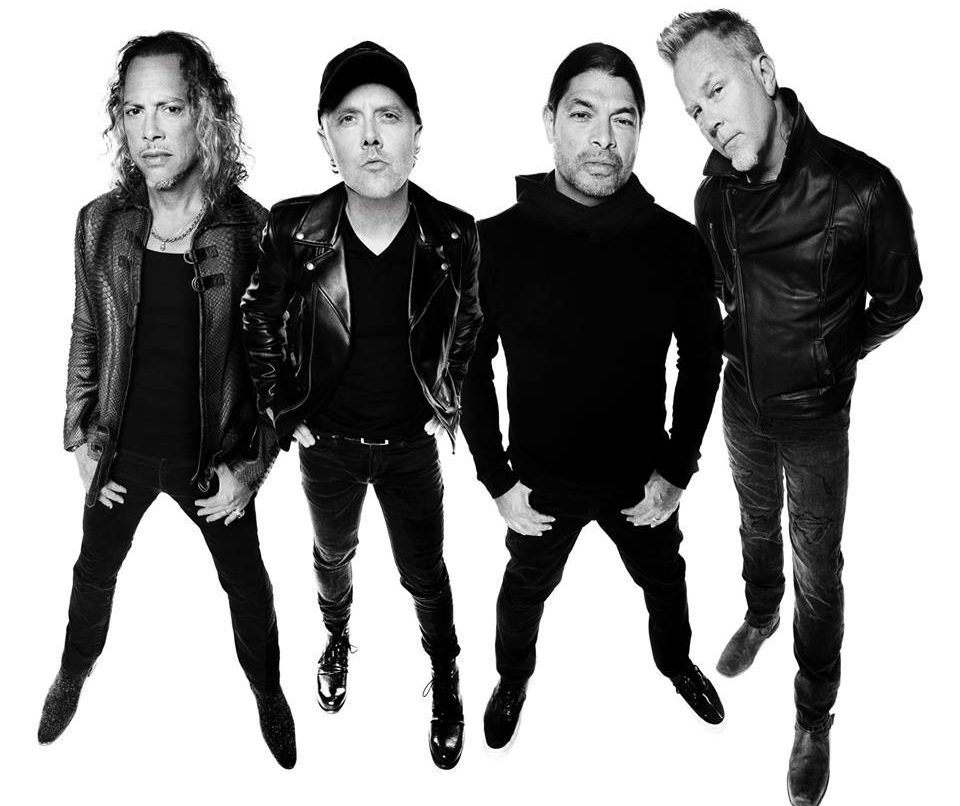 Ahead of the release of Metallica’s tenth studio album this week, Getintothis’ Joseph Viney counts down the metal giants’ greatest tracks.

Whether you like it not, Metallica are very neatly nestled inside of the pantheon of the biggest names in rock music. Hell, music in general.

Whether it’s another sell-out world tour, another high-profile use of their back catalogue, another copyright infringement lawsuit against another unassuming company, Metallica scaled the heights of their domain in the early 90s and haven’t looked back since.

Indeed, the first and only musicians to have gigged on all seven continents – having played in an Antarctic research station in late-2013 – have always courted a strongly divided opinion. Derided for shearing their long locks in the mid 90s, scorned for releasing the confusing St. Anger in 2003, pissed on from a great height for the whole Napster debacle…it’s been something of a bumpy latter day ride for the boys from the Bay Area who invented thrash and forged the hammer that helped to kill LA’s turgid glam scene.

With new double album Hardwired…To Self Destruct being released on November 18, now is as good a time as any to remind ourselves just why Messrs Hetfield, Ulrich, Hammett and whoever is trying their best to replace Cliff Burton have made it this far in the first place.

…but you don’t need us to tell you how popular Enter Sandman is, so let’s take a gander at some of the tracks that may have crept under the radar after all this time. Or, in the words of James Hetfield: “Let’s go, baybehhh yeahhh Metallica loves you, baybeh!” and so on.

Do you like lists of things that are rounded up to 10 and presented in order of preference? If the answer is “yes”, click here and all your dreams will come true

What’s the consensus on cover albums? Are they generally well received? Actually who cares…Garage, Inc. really made an impression across its two discs (you see, kids, discs were these things th…).

Mercyful Fate was a hellacious medley that comprised a number of songs from the Danish metal pioneers of the same name. It’s a real test of endurance but manages to keep you hooked with its many twists and turns, the blending of five or six songs working an absolute charm. Hail Satan indeed.

Metallica attended Alice In Chains’ MTV Unplugged show in 1996 and found a stark demonstration of how some viewed their new-found success and change in both aesthetic and attitude.

Facing the oncoming new millennium head on, Metallica swapped their long locks and mucky baseball trainers for short backs and sides and an all-black motif that would have made Johnny Cash proud. They had swung from greasy thrashers to refined would-be blues rockers, and courted more than a little opprobrium along the way.

Alice In Chains’ bassist, Mike Inez, famously scrawled on his instrument that night: “Friends Don’t Let Friends Get Friends Haircuts”; a pointed reference to their new look and the sitcom that was gobbling up the ratings and plaudits at the time.

Inez was playing around for the most part – Metallica and Alice In Chains enjoyed an amicable relationship – but it was a sign that Metallica’s foray into a more standardised form of alt-rock had ruffled a few feathers. Fans felt betrayed, their contemporaries remained suspicious.

Load has long-suffered from unfair judgements from all sides. Like any album it has its faults but many overlooked the fact Metallica were at least *trying* to change instead of ploughing the same old worn furrows.

2×4 is one of the album’s standouts. Loose, easy and seeming like the soundtrack to a brawl in Bob’s Country Bunker, the lyric of “the joy of violent movement pulls you under” is a good enough description of the rest of the album.

If Load didn’t take enough flak, then ReLoad really tested some people’s patience. Reworking some of the demos that didn’t make the final cut for Load, Metallica did take their foot off the pedal a little; either buying time for themselves or just looking to make a little cash (did they need any more?!) by reheating some of the leftovers from prior sessions.

Despite the suspicious context, ReLoad does chuck a few good numbers our way, one of which is the filthy, swinging and broodingly evil Devil’s Dance.

Kerrang! deemed this song as having “lyrics straight from the back of a cigarette packet”. Whatever ciggies they’re smoking, I’d like some too.

You’ll notice that we’ve skipped St. Anger, and that’s a good thing. We don’t need to talk about it, do we?

2008’s Death Magnetic followed up that atrocity. It may be lacking in terms of originality and vitality, but Metallica really bashed the nail on the head with All Nightmare Long. It’s tendril-like introduction gives way to hammer blow after hammer blow, aided by a wide open chorus. It’s Metallica doing what they’ve always done best.

Metallica’s most successful commercial period came with a huge, neon caveat: things would never be the same again. Their globe-straddling eponymous album – known colloquially as the Black Album – saw the band finally dispose of any semblance of thrash they may have had floating in their bloodstream and embrace the big polished production of Bob Rock and ballads like the tepid (you know it is, I know it is…don’t kid yourself) Nothing Else Matters.

Fittingly, the Black Album’s final track was the one that provided the biggest call back to those early days, but Hetfield’s lyrics could be construed as a warning to those who dare to doubt them as they set out on the road to mega-stardom.

“Kicking at a dead horse pleases you, no way of showing your gratitude”, “boredom sets into the boring mind” and “advantages are taken not handed out while you struggle inside your hell” may well have been barbed points aimed at their detractors, those who wanted them to stay inside the cocoon they were just about bursting from in grand fashion.

Mention …And Justice For All to any Metallica fan and there’s a chance they could curl into a ball and rock back and forth on the ground. The band’s fourth album is widely seen as one of the biggest missed opportunities in their career.

Still reeling from the death of Cliff Burton in a tour bus crash in September 1986, Metallica drafted in former Flotsam & Jetsam bassist Jason Newsted as his replacement and set to work on an album that decried government, power structures and the rampant hypocrisy of the elite.

And yet…for some reason – some cite grief and a bad atmosphere, others claim a weird hazing-style prank on Newsted – the bass was rinsed right out of the mix and the album suffered immensely as a result. Instead of a thunderous return from a band that had its heart ripped out, we were given the sonic equivalent of a three-legged dog.

The album still stands as one of their best, but it could have been so much more. The Shortest Straw is one of the finer contributions. Hetfield’s curt, barked lyrics speak of the dizzying imbalance of the system when it is tilted and weighted against you, perhaps metal’s attempt at taking on the term Kafkaesque.

Metallica’s debut LP was a maelstrom of thrash, young and dumb sentiment and wailing guitar solos (courtesy of Dave Mustaine who was kicked from the band not long before the record was cut). Yet nestled right in the middle was this dark, gloomy, bewildering but magnetic solo piece from Cliff Burton; the band’s brightest spark whose death three decades on still resonates sharply.

Turning the decadence of the era enjoyed by groups like Pink Floyd, Rush and all manner of prog bands, Cliff mixed deft playing with fuzz and distortion that wrecked the ears but begged for your attention. Never one to do things by halves, simply watching Cliff immerse himself in performing this song was enough to get the blood pumping. A lot less painful than pulling teeth anyway.

Capped by Lars joining in for a speedy outro, Anesthesia eventually gave way on the album to this list’s next choice…

Metal has always tried to imbue itself with a scope and vision bigger than most will give it credit for. The clichéd view of the genre (and it’s myriad sub-genres) is one that talks about grand battles, historical epics, the blood and thunder of war and malice.

Metallica tried their hand at something similar on their second album – 1984’s Ride The Lightning – with Creeping Death; the seven-minute masterpiece that pondered on the light and jovial topic of the Plague of the Death of the Firstborn from the Book of Exodus. Who says those metal guys don’t have a sense of humour?

Where …Pulling Teeth didn’t feel anything like a trip the dentist, Whiplash provided exactly that, if you were foolish or crazy enough to bang your head in time to one of the great, early Metallica anthems.

Sweating out youthful bravado at machine gun pace, Whiplash is the sound of bunch of torn-denim-wearing ne’er do wells giving the world the middle finger and laughing while they did so. Even playing along with air guitar is enough for a sprained wrist.

It’s chock-full of choice lyrics that gave listeners an idea of the Fuck The World attitude Metallica cultivated in those early years: “Life out here is raw, we’ll never stop, we’ll never quit, ‘cause we’re Metallica”. Funnily enough, it stands as their most truthful lyric after all this time.

Speaking of light-hearted subject matter, here’s another corker for you. Master Of Puppets is by and large considered the band’s magnum opus in terms of scale, scope and ambition. Led by Burton – whose penchant for classical music pushed the band into ambitious territory – Metallica delivered with aplomb. Third track The Thing That Should Not Be is one of the record’s highlights, but outside of their core fandom, tends to be forgotten.

The song is inspired by H.P. Lovecraft’s The Shadow Over Innsmouth and is suitably heavy and sludgy enough to replicate the sound of unearthly beasts rising from the sea and soil; another strand of Lovecraft’s sprawling, demonic Cthulu mythos.