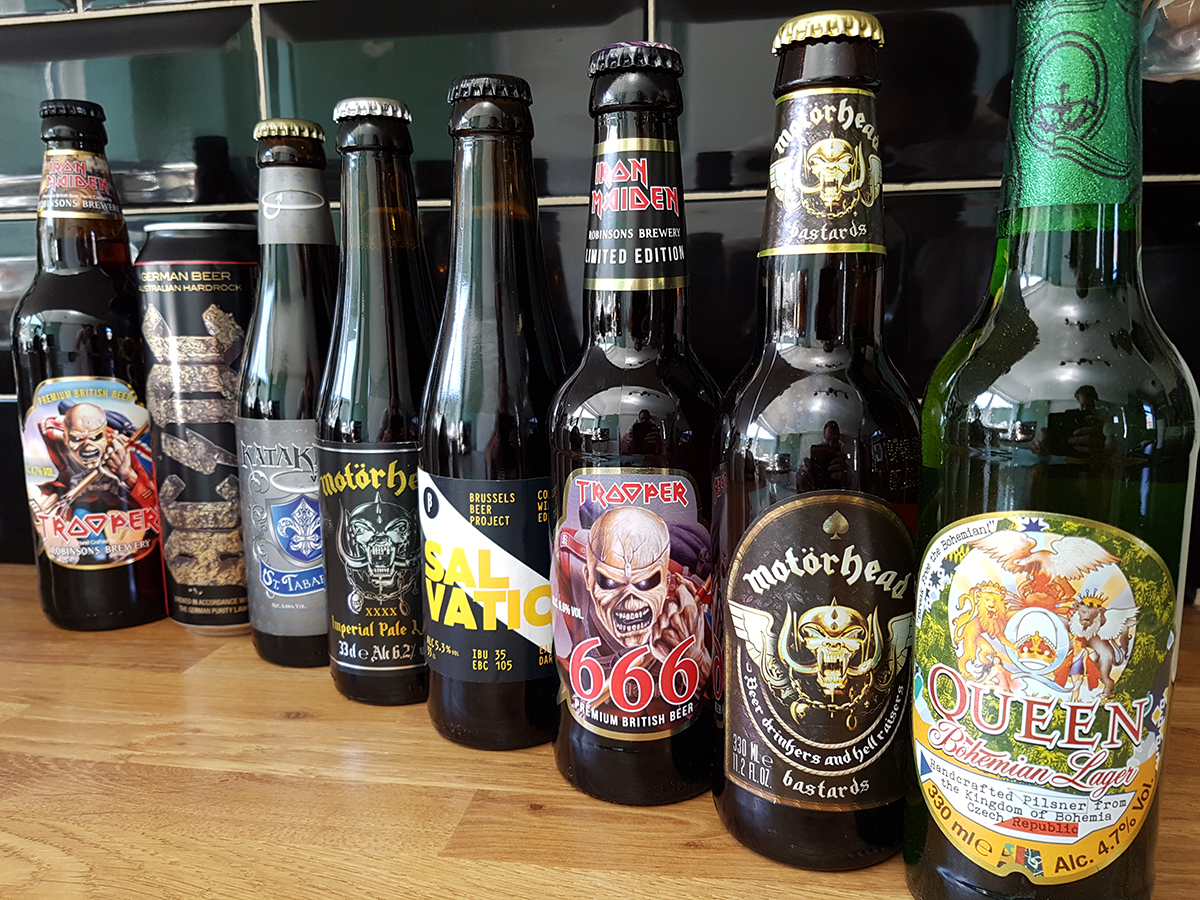 A band of beers

If you’re tired of the same old Christmas beers, Getintothis’ Martin Waters tackles his own special ‘battle of the bands’ and puts some music inspired beers to the test.

If like me, you enjoy the odd beer or two, you must have noticed that Liverpool is doing rather nicely in the resurgent craft beer stakes.

From Brewdog Liverpool, Black Lodge Brewery (and their rather special running club), 23 Club, the Kazimier Gardens and the award-winning Dead Crafty Beer Company (Best bar at the Liverpool Food and Drink Festival recently), when it comes to craft beers you’re spoilt for choice if you’re looking for a decent place to while away a few hours.  And with local breweries Mad Hatter, Liverpool Organic, Ad Hop, Melwood Beer, Neptune Brewery and Liverpool Craft Beer – to name but a few (and guys I’d be happy to review anything you have to offer) –  more than holding their own against, and being far more interesting than the more established names, the craft beer movement is no longer just seen as something else for hipsters to ruin.

With the regular Liverpool Organic Beer Festival at St George’s Hall and the piece de resistance that is the Liverpool Craft Beer Expo regularly at full capacity (and tickets for June already on sale), it’s clear that Liverpool has a real thirst for decent beer – if you excuse the pun.

With the upswing in popularity, it’s not surprising then that there has been some questionable bandwagon jumping and a number of bands have thrown their lot in with a variety of brewers to produce a range of ales carrying their ‘100% guarantee’ of quality.  The actual level of involvement of each band is often unclear, but they do swear that the band has had some sort of helping hand in formulating the flavour that ‘every [insert band name here]fan will enjoy.’

I thought it was time we put a few of them to the test and, while I may not be a fan of all of the bands involved, as a fan of beer I thought I was best qualified to undertake such an arduous assignment.  So, while beating off the attempts of rival Getintothis colleagues to help lighten my burden with the skill of a Saturday night drunk in Concert Square, I appointed myself the Getintothis Beer Correspondent and got down to work.

Deciding what beers to tackle was a difficult choice.  Some of the more interesting collaborations were fleeting in their lifespan and are currently being rested (generally marketing speak for ‘hidden away until you forget how foul they were so we can relaunch another collaboration’.)  I also didn’t want to pick beers that, if you were interested in trying them yourself, you’d have difficulty getting your hands on.  As a result, the beers under scrutiny range from the ones picked up in supermarkets to those easily found on the net.

There were some beers I simply wasn’t able to get my hands on due to ‘creative differences’ *cough* and these included:

This still left a fair array of fairly easily obtainable beers to try.  So I settled in for a night of difficult research and, to actually make it seem a bit like work, also cranked up an appropriate tune or two.  First out of the bottle, we go with one of the most successful collaborations to date. 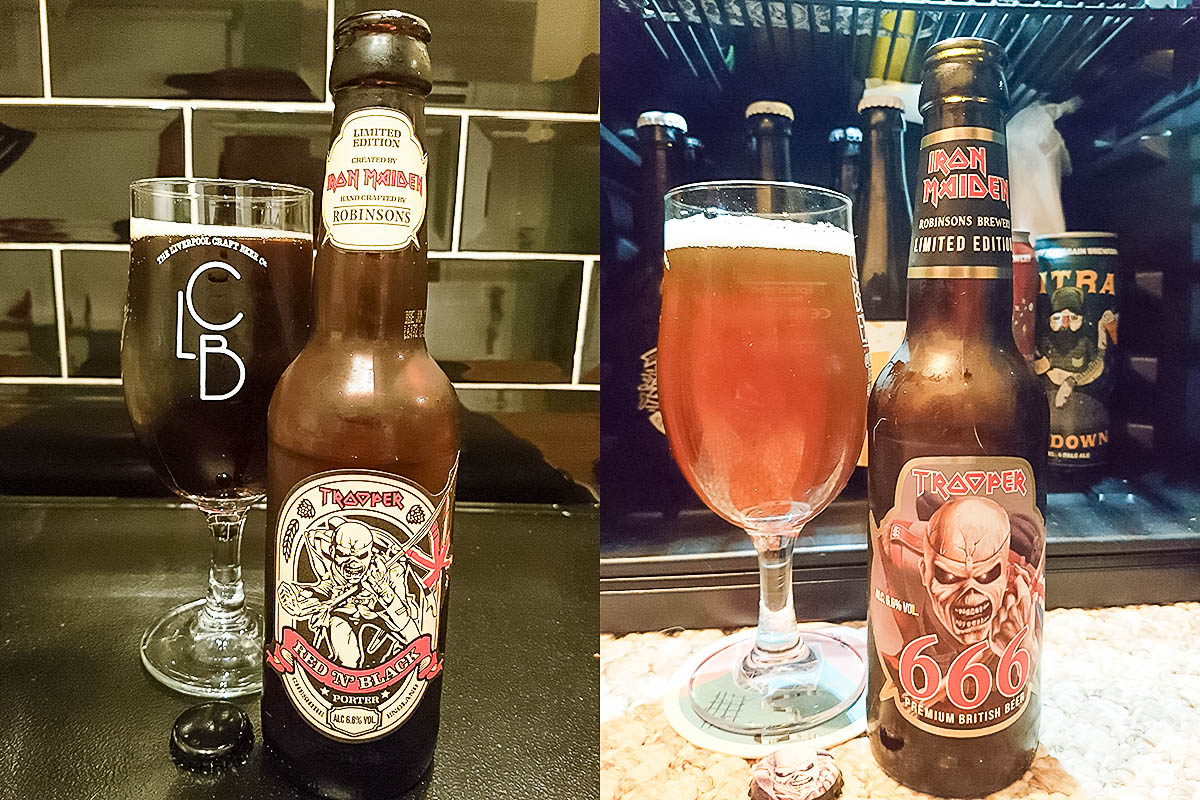 It’s appropriate that our first brew is Iron Maiden’s Trooper, one of the first real band influenced successes having sold over 10 million pints in a little over 2 years (a fact celebrated with the special edition 666 range.)  Just to even things up I decided to test the quality of both the original Trooper (a mainstay Aldi buy) and the slightly harder to get 666 (which I’ll have later on if I’m still awake).

Now this is one where you can be pretty certain Bruce Dickinson has had some sort of hand in the development.  Remember this is the guy who liked planes so much he became a pilot.  So if brewers Robinson say he was involved, you can bet he was.

The beer itself is an easy drinking 4.7% and pours with a copper colour finish and a nice foam head.  The initial malty aromas of toffee and caramel promise good things, but it is a pretty standard bitter with a dry, biscuity finish.  The initial flavour doesn’t really last past the first few mouthfuls and all you’re left with is a pretty standard English ale.  Unfortunately not a rock classic.

Drink it listening to: The Trooper (from Piece of Mind 1983) obviously.

‘And bad mistakes, I’ve made a few’ sang our Freddie, but he never made as many as Masters May and Taylor in their never ending quest to muddy the Queen legacy for a few quid.  Released to coincide with the 40th anniversary of the classic Bohemian Rhapsody this is a tie-in of WTF levels.

It may have been forgivable if it was a decent brew, unfortunately, it isn’t.  It may boast of adhering to Czech purity laws, but that means nothing if the taste is a nondescript bog standard lager.  And not even a good lager.  There’s a hint of a slightly metallic taste with a bitter finish and quite frankly it’s not overly enjoyable.  Having said that, it comes in a six pack so there are a few more to test out my initial assessment.  Nah it doesn’t get any better.  Definitely one for curiosity sakes only and maybe to neck while you’re concentrating on burning the burgers during a traditional rained off British BBQ.

Drink it listening to:  Well, Bohemian Rhapsody (A Night at the Opera 1975)  would be the obvious choice but I’m going for One Vision (A Kind of Magic 1986) 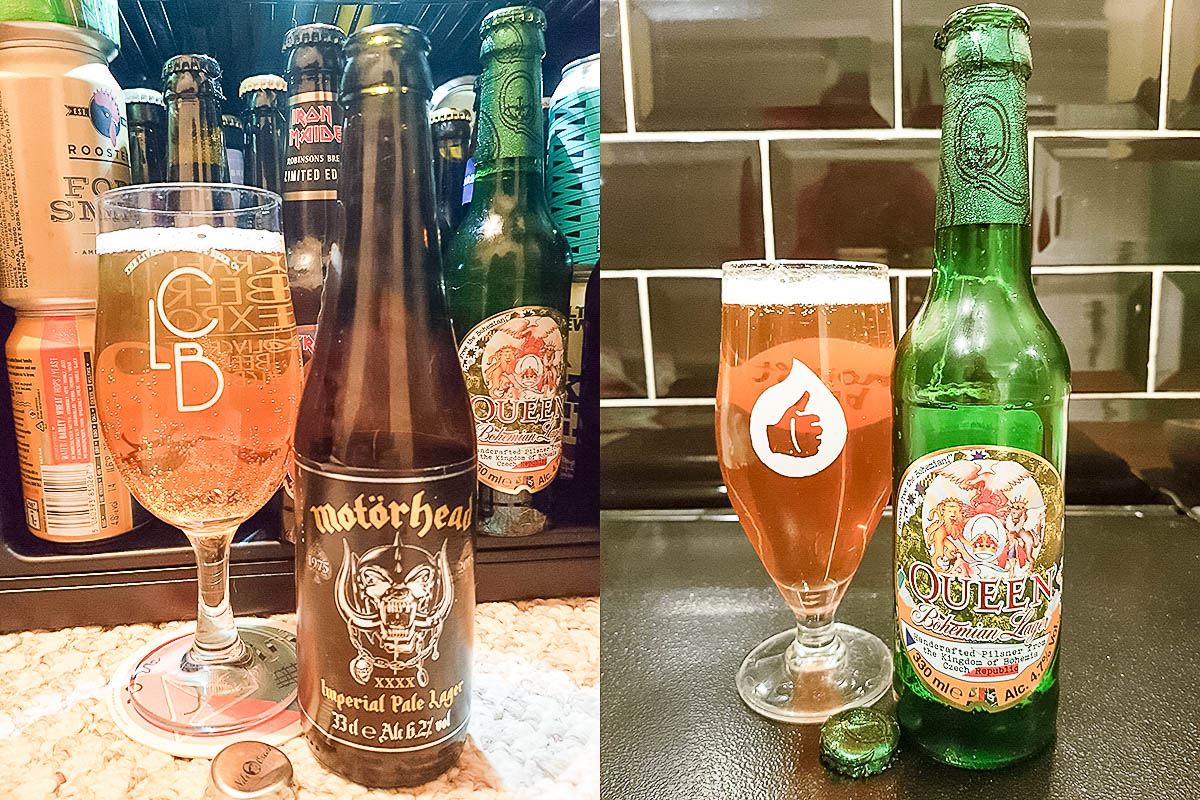 Motorhead face off against Queen

At only 4.7% it’s actually not that much of a bastard and once you’ve tasted it you realise it’s not even a bit of a bounder.  This is actually pretty standard lager.  Pours clear and golden with a small head that quickly vanishes.  There’s no real aroma to it and the flavour fails to pack any of the expected punch being slightly sweet and lacking any real hoppiness.  I thought the Bohemian Lager was bad, this is worse and even manages to top Queen in the cash-in stakes.

Bastards isn’t actually Motörhead’s only attempt at alcohol-related cash-ins and they actually put their name to vodka, cider, whiskey and a cheeky shiraz.  Based on the evidence of this little tipple they’re probably best avoided. Aside from the curiosity factor, there’s no real reason to bother trying this and I only finished the bottle for pure research purposes obviously.  You can bet Lemmy never drank this gash.

I have to say this Canadian Death Metal band had not crossed my path before.  Having checked them out on Youtube I’m not surprised.  For something that had clearly been tweaked to hit that all important, and pretty pointless, 6.66% you’d expect something pretty wicked or at least slightly devilish.  It’s nothing of the sort.  A run of the mill Pilsner that really doesn’t do anything for me.

Drink it listening to: Anything you want, it pretty much all sounds the same. 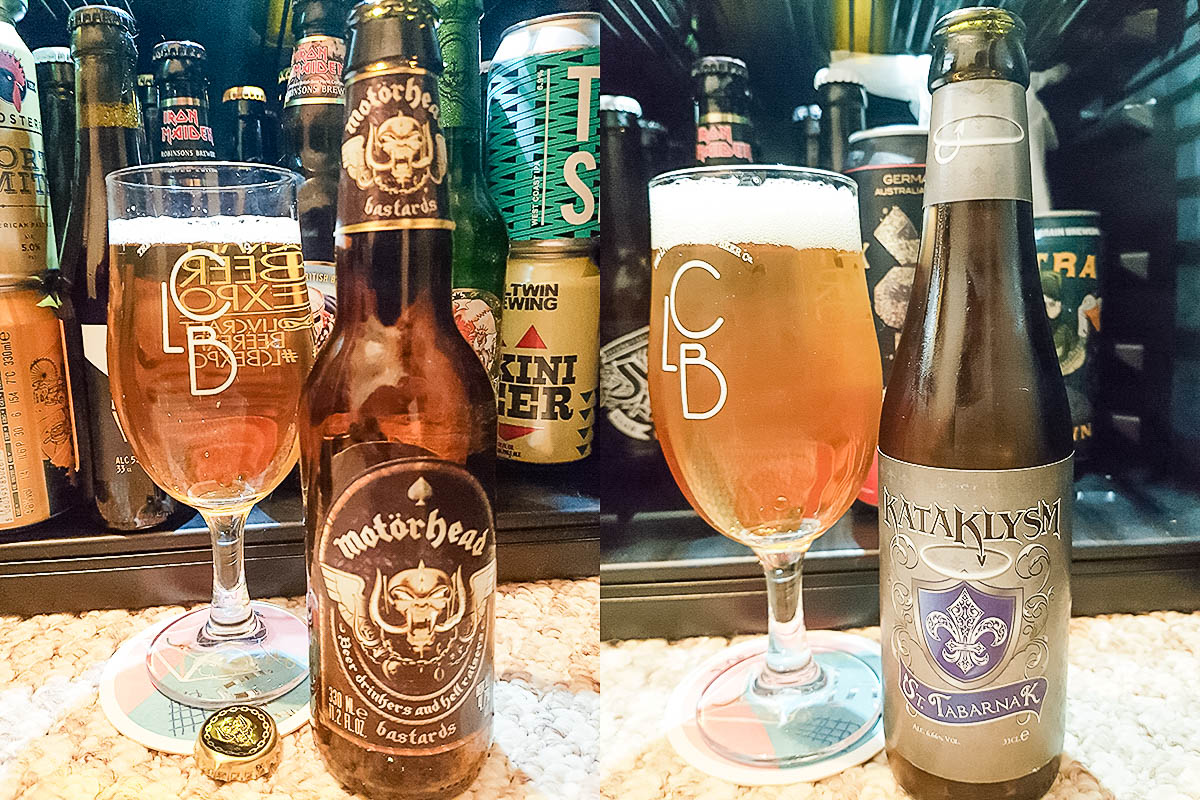 Motörhead have two entries in our list and this second one is a marked improvement on the first (well let’s face it, it couldn’t have been much worse).  Stronger than Bastard Lager it is again a clear golden brew but manages to hold its head a lot better, it also packs a lot more flavour being almost an IPA and offering a strong citrusy palate.  This one definitely meets with my approval.

Drink it listening to: Time to crank it up a notch and go for Overkill (Overkill 1979)

The second of three Iron Maiden ales on test tonight and you have to say they’re swamping the beer charts.  This is the only porter on the list, a little bit traditional with a rich dark red colour.  Clear hints of chocolate and coffee, as you’d expect, make this a good porter but it is perhaps just a little thin for true porter aficionados.  All in all, though it makes a nice change from what’s gone before it so, for that alone, it is up there near the top of the list.

Drink it listening to: The Red and the Black (The Book of Souls 2015) 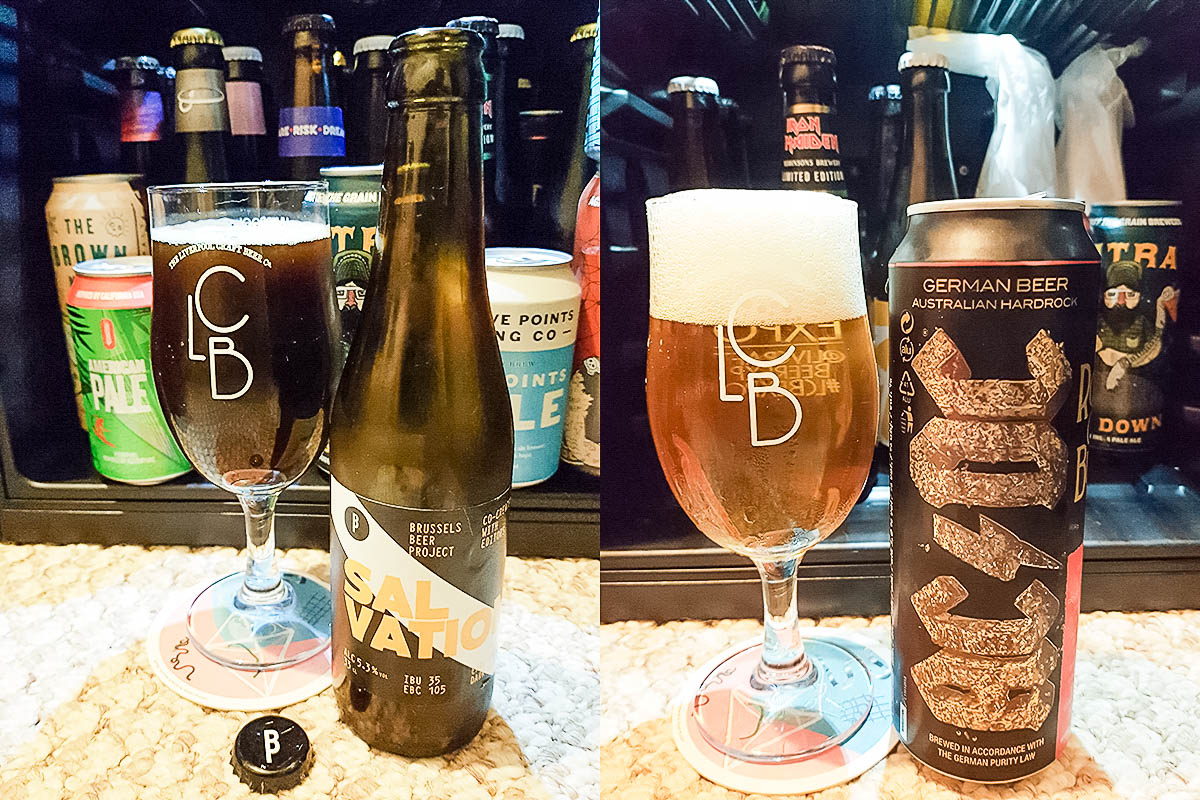 Apparently brewed to the ‘Rock`n Roll manifesto of 1973 and the German purity law of 1516’- while that may be the case, it is definitely more Axl Rose than Brian Johnson.  You don’t really expect great things given the design of the can, which is a good job as one thing you don’t get is great things.  What you do get is a gassy, flavourless pint of absolute gash.  And I’m being generous.

Drink it listening to: Making up for the gassy shite with Back in Black (Back in Black 1980) – had to be really.

Ah, finally something half decent.  While all of the others are shameless cash-ins, Salvation actually smacks of a bit of quality (mainly to do with brewers the Brussels Beer Project). It pours a nice dark brown colour and immediate toasted malty aroma with a hint of coffee and a slight taste of Earl Grey and a lingering bitterness.  All in all, it is the best of the bunch so far and probably the only one which you’d rank in the true ‘craft beer’ category.

Drink it listening to: Well Salvation (In Dream 2015)  is the obvious choice. 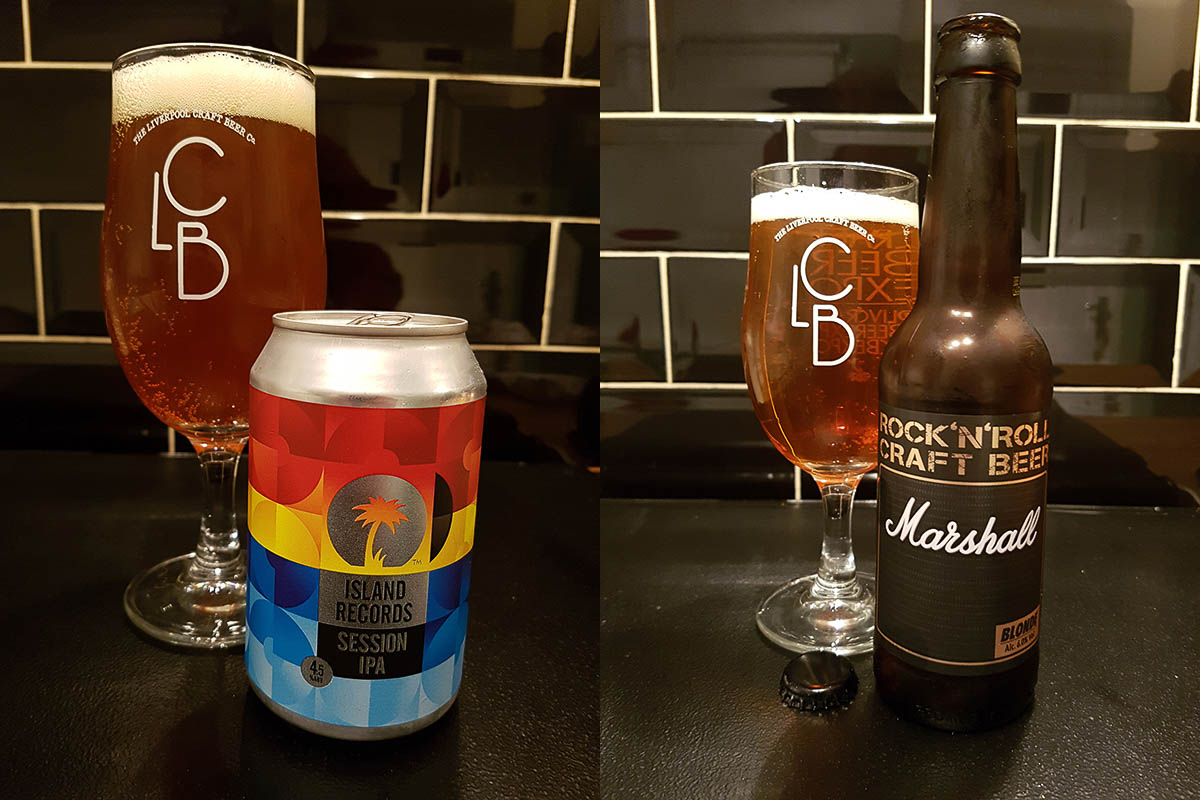 Innovative can from Island records, limp ale from Marshall amps

OK, so not a band but a whole record label!  Appropriate that this has a big citrusy fruit flavour, slightly let down by a bit too much bitterness on the back end.  It’s an enjoyable summer drink but pretty much the alcoholic equivalent of a can of Lilt.

Drink it listening to:  Well they’ve actually supplied 3 Spotify playlists to get you into the mood so take your pick from sunset reggae and acoustic cuts from Toots & The Maytals and Kiko Bun to party grooves from Grace Jones and Tom Tom Club to Bob Marley, U2 and Mumford & Sons.  You can actually just Shazam the can and hey presto, music to get drunk to.  But I couldn’t be bothered.

And another not quite a band beer but one from that perennial stage favourite Marshall.  It’s OK, a bit too lager like for a blond and pretty accurately described as a beer for people who don’t like beer. To get any joy out of this they really need to Spinal Tap it and crank it up to 11.  They haven’t and so, as with the end of all good amps, this probably deserves to have a damn good trashing.

Drink it listening to: Anything, just crank that baby up to 11 in memory of what might have been.

Trooper 666 special edition. No not the number of the beast but the reported number of troops in at the Charge of the Light Brigade (yes they’ve conveniently found an extra 66 more than first thought or so they say.) Anyway, this tasty brew celebrates the massive sales of the original Trooper but in a stronger format.  Tastes the same really, not that I can tell.  My face has gone numb.  Probably shouldn’t have filled in the gaps with the remaining Bohemian lager.

So there you have it, a bit of a mixed bag and nothing that would bother the pumps at Dead Crafty or Black Lodge.  Maybe we need to get a special Getintothis Ale brewed for next year’s GIT Awards just to put these to shame.  My advice would be to swerve all of these and get yourself down to one of the aforementioned bars and hope they have Omnipollo Pecan Mudcake on tap.  I’ll see you there, but right now I need a bit of a lie-down. 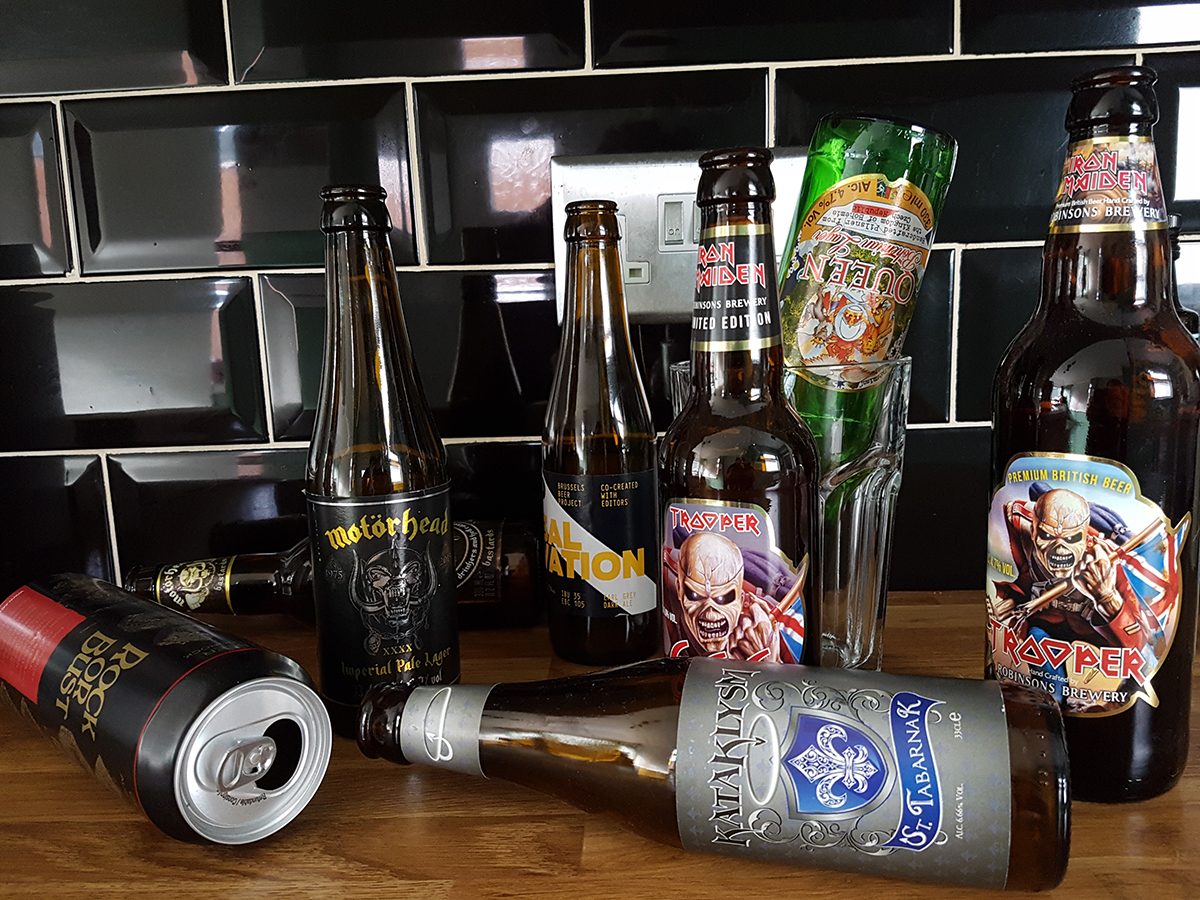