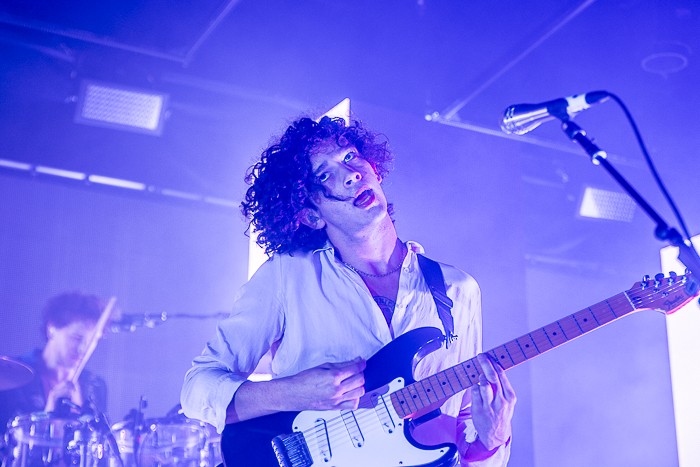 The 1975 at Liverpool University – pic by Michelle Roberts

Following pretend outrage over NME’s album of the year, Getintothis’ Shaun Ponsonby asks why anyone would care what the magazine put on top of their list.

I’ve never really read NME. I bought it once or twice, and I make a semi-hobby of correcting some of the ghastly faux pas on their website. Like when they referred to The Who’s front man as “Roger Waters”, and when they named one of Springsteen’s biggest hits as Dancer In The Crowd. The kind of amateur bullshit that makes you wonder whether they do it on purpose. Believe me, when people kick up a stink on your article more people click on it and advertising revenue is increased (actually, forget I said that).

This week bona fide NME groupies starting crying into their Arctic Monkeys collection when they named The 1975’s preposterously titled second album  I like it when you sleep, for you are so beautiful yet so unaware of it (no, that wasn’t bad grammar on my part, they stylised it without capital letters) as the best of the year. Of course it isn’t, but some long time NME-types seemed personally offended that Johnny Borrell MK II – aka Matt Healy, the offspring of a Loose Women panelist – and the other ones were given the honour, especially considering that they were named “Worst Band” by the magazine in 2014.

I don’t know about your social media, but the people who were most pissed off on mine seemed to be largely white males in the over 35 bracket, which leads to the delicious Newsthump-worthy headline of “Middle Aged Music Fans Don’t Like Direction of New Music Publication”.

Of course, this was countered by the completely made up Kevin, 48, who thought Oasis and the Stone Roses were a load of wank and pined for the days of Joy Division and The Smiths, whilst equally imaginary 56 year old former punk John is of the opinion that NME should have folded when the Sex Pistols split up.

One of the charges aimed at them is that they have succumbed to commercialism. By putting the magazine out for free, they have had to change direction and piggy back off the success of bigger artists to keep their online revenue up. It can’t be denied this is happening, although let’s be honest – it’s a business and this was always an element of their output. Who has been on the cover this year? Justin Bieber, Bruno Mars et al. But at the same time I do see this as some welcome diversity.

There is a myth, largely perpetuated by Britpoppers, that NME is some kind of Holy Bible for all music fans. Without it we would crumble and shit, yeah? But it’s really only a Holy Bible if indie landfill and lad rock are your thing. It can’t quite shake that image. All of my friends (or what passes as friends in my world) who read NME are of that ilk. I don’t have one female, black or LGBT+ music loving friend who has ever professed that they give a flying fuck what NME has to say about anything. Ever.

Now, there’s nothing wrong with that. They have a target audience, right? That those people have little in common musically with what I listen to myself isn’t of concern, but it is irritating to see this arrogance of assumed superiority, the idea they were some kind of last word.

There have been 43 NME albums of the year awarded, with only a handful to black artists (Grace Jones, Marvin Gaye, Bobby Womack, Prince, twice to Public Enemy, De La Soul, Tricky, and we’ll count Bloc Party for Kele Okereke – how all-encompassing has hip hop been for the last fuck knows how long, again?), and even fewer to female artists (Jones, Bjork, PJ Harvey, St. Vincent, Grimes – I guess you could give half a point to The White Stripes). The rest have mainly been bands seemingly cut from a certain cloth. To my un-indied eyes, The 1975 fit right in; a half-good straight white indie band with haircuts that look cheap but were probably expensive that I’m never going to listen to.

I’m aware that I’m mainly talking about the image of NME, rather than the full reality. Yes, they have included a lot of more diverse stuff in there over the years, and writers with fairly good ears. But you can still tell who was calling the shots. You can instantly see the exclusive culture that permeates it, even when the writers are female or a minority.

It is going to take a while for NME to reconfigure and get the balance right with their new set-up. But honestly? I never gave a toss what they thought anyway.

Another year, another 67,000 “Make [insert song/artist]Christmas number one” campaigns. You know, because it worked that one time years ago and hasn’t since.

Guns N Roses fans who swear the band are some kind of mythical “real deal” should probably take note that they just revealed their own branded slot machine.

That more young people are watching David Attenborough‘s Planet Earth than The X Factor gives us hope for the future.