With Lucy Rose embarking on a stripped down style, Getintothis’ Victoria Camidge settled in for an intimate evening at Central Library.

Lucy Rose is a songstress known for her enchanting voice, touching lyrics and signature folk sound; epitomised by her first LP, Like I Used To. With the release of Work It Out in 2015, Rose seemed to be moving away from folk in favour of a pop vibe, yet her most recent release, Live at Urchin Studios, features songs from both her LP’s re-recorded in a tender and minimalist manner, with only one bandmate and in front of a live audience of about 30 fans.

The library tour Rose has embarked on to celebrate this release has given her the chance to perform many of her hits in a stripped back style, as well as giving her fans an opportunity to engage with her music in a more personal environment.

After a beautiful supporting set from duo Annie Eve, Rose opened the show with My Life, her dreamy voice echoed around the library in a haunting and manner. She confessed that there were only a small number of tickets put on sale for this tour, as she wanted it to be a more intimate experience for fans, which, although the phrase is often overused, it certainly was.

Before playing Find Yourself, a song she’s recently written, Rose explained that over the year she has been unsure about whether to make a third record and found herself questioning her talent and wondering if she should just do something different altogether, such as “work in a café and make a really good brew”. The relaxed conversation between Rose and the crowd, many of whom were sat crossed legged on the library floor and scattered across the stairs, coupled with beautifully crafted acoustic versions of her songs gave the show a sense of exclusivity, informality and rawness which made the experience far more emotive.

At one point, Rose explained that her mother had asked her to record a video of herself singing happy birthday for one of her friends but that she had forgotten to record and send it.  A member of the audience promptly cried ‘Do it now!’, resulting in a library-wide rendition of Happy Birthday and outbursts of giggles from fans.

Rose continued to provide witty and engaging inter-song narratives, memorably recounting a beautiful story about someone she stayed with on her recent tour of South America, which she is adamant she would not have been able to complete without the support and hospitality of her fans.

Fernando was an equally heart-warming and tear-jerking song written for one of her South American fans and although she told the audience she was uncertain about whether the track will make the cut for her third album, it resonated well and left a forcible emotional impact, with many replying afterwards that they hoped it does.

Another of her new songs, aptly titled Moirai after the white-robed incarnations of destiny in Greek mythology, eloquently discussed the existence of fate (which Rose herself has admitted she doesn’t believe in). These newer tracks, previously unheard by many members of the audience, balanced well against her older and more well-known hits.

The relaxed ambiance meant that fans could request songs, with Rose playing a poignant version of Nebraska for a member of the audience as a birthday request.

Alongside it, Shiver was one of the highlights of the show. As she joked, “No one has requested it, but I can guarantee some of you want to hear it”. The hauntingly gentle and moving versions of both these songs left us, and I’m sure many other members of the audience, covered in goose bumps and close to tears. There was something about the intimacy of the library as a venue which rendered Shiver, a track which is already of such great emotional value to so many of her fans, more eloquent and touching than ever before.

Finishing with audience participation for Like An Arrow, Rose’s signature style shone through the up-tempo track. Throughout the show we laughed, we nearly cried and we were ultimately enchanted by not only her voice but her witty stage manner, informal small talk and interaction with her fans.

Her humility and respect for her fan base was epitomised by her gratitude to the audience and the simple ending statement that she would get off the stage and be waiting at the side if anyone wanted to have a chat with her; with ourselves and many others beaming in response. 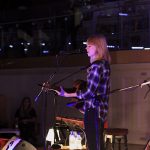 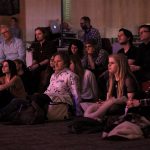 The audience at Central Library 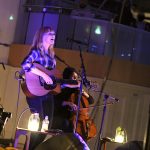 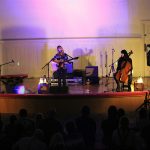 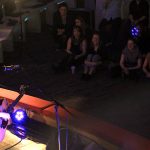 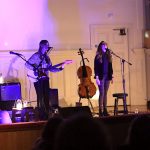 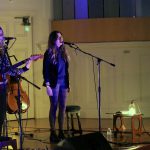