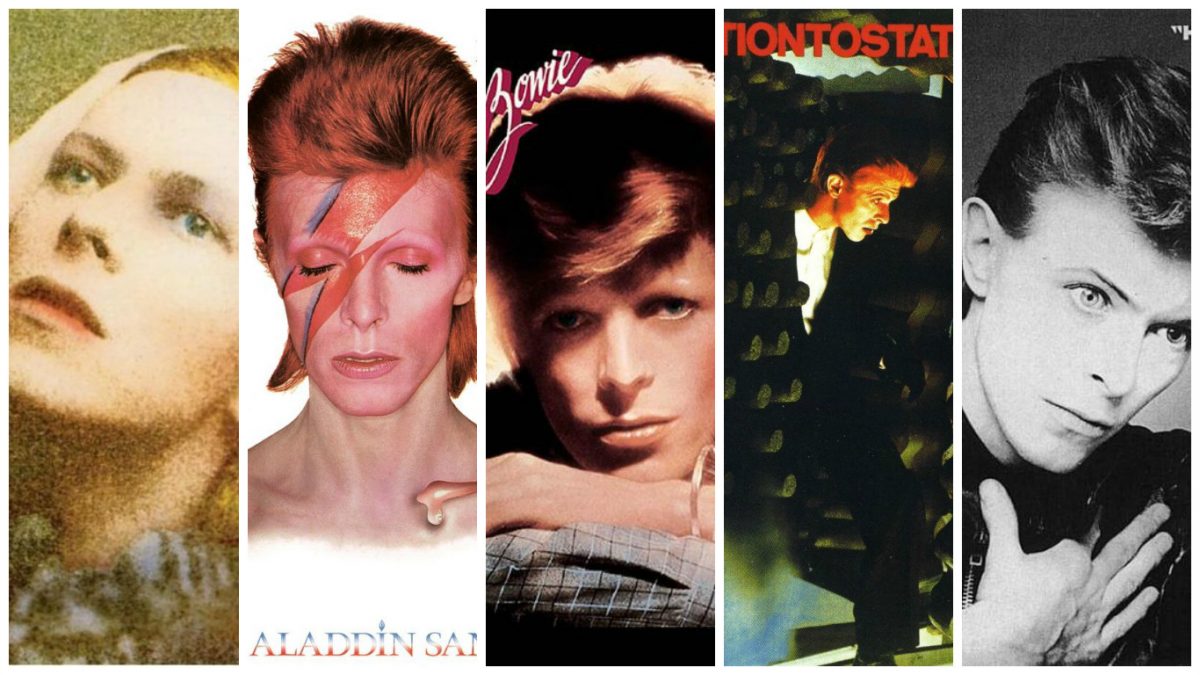 The XX have just released a new album, the successor to Coexist which was released back in 2012. The forthcoming new album from Elbow is also due shortly, following on from their previous album, released in 2011.

This kind of release schedule is not uncommon, indeed some bands would have seen this as positively hectic; Stone Roses took five years to follow up their debut album, Portishead took 11 and Guns ‘n’ Roses took a colossal 15 years.

On the other side of the coin, the punk explosion of the late 70s developed at a furious pace. For example, The Stranglers released their first two albums in 1977 while The Jam brought out their first four albums in three years. Neither could sustain this pace though, The Jam going on to cite this as a time they almost burned out.

So let us doff our caps in admiration of David Bowie, who released 11 albums in nine years, during a period that also covered his rise to stardom, huge tours of the UK and US, new bands, new directions and film roles. What’s more, nearly everything he did was of cultural significance and influenced almost the entire next generation of artists to some degree.

Space Oddity was the first of these records. Originally, it was his second consecutive album to be self-titled, but was re-released under the new new title in 1972 following his success with Ziggy Stardust. Bowie grew from an artist struggling to find an identity and chasing success to one of the world’s biggest and most credible stars. The album itself features classics such as the title track, A Letter to Hermione and Memory of a Free Festival.

Of course, this isn’t the Bowie that is now engrained into public consciousness. The album is much more folk rock oriented than anyone coming in from his more popular albums might expect, but after the commercial failure of his debut album it feels like David Bowie is beginning to emerge.

The following year saw The Man Who Sold the World, perhaps more memorable for the cover, which featured Bowie in a dress. The image was hastily replaced with a cover more likely to have broader appeal. The album did not sell well, despite being Bowie’s first album with both guitarist Mick Ronson and Tony Visconti. It was also a sharp change in direction. After the folk rock of his previous album, The Man Who Sold The World is almost metallic, with subject matter as heavy as the music, from the insanity of All The Madmen, to the gun totin’ assassins of Running Gun Blues. But greater things were to come.

1971 probably saw the first classic Bowie album in Hunky Dory. Featuring Life on Mars, Queen Bitch, Changes, Oh! You Pretty Things and Andy Warhol, along with lighter moments such as Kooks which almost harked back to the kind of song he may have written for Space Oddity, but in the context of Hunky Dory sounds new and fresh.

Bowie was now fully realised and ready to conquer the world – and that is exactly what happened following the release of his next album, The Rise and Fall of Ziggy Stardust and the Spiders from Mars.

Ziggy made Bowie a global superstar, and with superstardom came the pressures of fame. The promotional tour ran from 1972 – 73, with venues increasing in size as Bowie’s star rose ever higher, often selling out two or three hastily added nights in the same venue. Somehow in the midst of all this, he managed to find the time to not only write and record Aladdin Sane, but to release Pin Ups, an album of cover versions – the main reason for the latter being that his management company, Mainman were going broke.

Aladdin Sane itself almost subverted Ziggy Stardust. As important an album as it is, the previous record was a staright ahead rock and roll album. Aladdin Sane has plenty of twists and turns that could very easily confuse the teenage listener who dug Suffragette City. Take Time, a fucked up burlesque cabaret featuring the immortal line; “Time, he flexes like a whore/Falls wanking to the floor“.

Bowie guitarist Ear Slick talks to Getintothis about his years with The Thin White Duke, working with Lennon and the making of Station To Station

Bowie‘s 1974 album, Diamond Dogs, opened with a cry of “This ain’t rock ’n’ roll, this is genocide!” and was the sound of Bowie gradually moving on from glam rock. Rebel Rebel was the big single from the album, a classic glam strut, but Bowie already had his eyes on the future. By the time 1975 rolled around, he had very publicly split with the Spiders From Mars and followed up his damaged glam rock with an unexpected turn in to Soul & R&B.

With hindsight, the clues that Bowie would turn to R&B were actually very present. Listening to 1974’s David Live, even leaving aside the cover of Eddie Floyd‘s Knock on Wood, the soul sound was beginning to rear it’s head in the arrangements of his older material, and he is dressed in quite the dapper fashion on the album’s cover (even if he does look terribly gaunt). Truth be told, the album is a bit of a mess, and Bowie himself joked that it should have been called David Bowie Is Alive and Well and Living Only in Theory.

Still, it is a fascinating snapshot of the time between Bowie‘s glam period and the soul of the following Young Americans. Perhaps pre-empting his critics, Bowie described the Young Americans album as “the definitive plastic soul record.” Lead single Fame gave Bowie his first US number one, and had it’s legacy in funk enshrined when George Clinton based Parliament‘s Give Up The Funk (Tear The Roof Off The Sucker) on Fame’s beat.

Bowie also somehow found the time to star in The Man Who Fell to Earth in the same year, providing the world with some of his most enduring images, one of which became the cover of his next album.

1976’s Station to Station saw further progression, and is a very transitional record between the soul of Young Americans and his next creative streak. Golden Years provided another top ten US hit, although Bowie claimed to have no memory of making the album due to his massive cocaine intake. Drugs and paranoia were running rampant, with Bowie shocking his band with the sheer volume of cocaine he got through in a day, telling of imminent fascist uprisings and, in one memorable incident, closing the curtains during an interview as he thought he had seen a body fall from the sky. Clearly something had to change.

To regroup, Bowie moved to Berlin along with his wife Angie and Iggy Pop. Although the logic of trying to conquer a drug habit by rooming with Iggy in the heroin capital of Europe may be questioned, this period nonetheless saw what was perhaps the high water mark of his creativity.

1977 saw Bowie release both Low and “Heroes” kickstarting what has become known as the “Berlin Trilogy”, alongside producing The Idiot and Lust for Life for Iggy. There is an argument that Bowie is only as good as the people he collaborates with, but it seems that in Berlin he and Iggy, along with Brian Eno and Tony Visconti, spurred each other on to new creative heights and new ideas, with both producing perhaps their career highlights.

Bowie also found time to play keyboards on Iggy’s tour to promote his albums, refusing to give any interviews on the tour, as he insisted that this was Iggy’s tour, not his. The following year, 1978, was the first year without at least one new Bowie album since 1969, an incredible run, especially given the circumstances.

Lodger rounded the trilogy off in 1979, followed by Scary Monsters (And Super Creeps), which has always felt like the culmination of all of his work in the 70s. This is true not only due to the often mentioned resurrection of Major Tom from Space Oddity, but also in tracks like the Heroes-echoing Teenage Wildlife. This was the sound of an artist who had come full circle, so shouldn’t be any real surprise that it was his last record for three years. When he did return with 1983’s Let’s Dance, Bowie became a bona fide pop star. But the time before that makes one thing clear; this is without doubt one of the most impressive back catalogues in music.

In these days of X Factor overload, where singers seemingly must have accompanying sob stories and where it is apparently acceptable for an artist to want to win a recording contract purely to ‘make a better life’ (i.e. win a lot of money) for themselves and their family, it is worth reflecting on the creative drive that Bowie obviously had and how it can/should define an artist. The odious cry of wanting a better life is simply not a good enough reason to make records or call yourself an artist, and simply playing an instrument shouldn’t necessarily make you an artist.

Bowie made records at such a furious rate because he had something in him that demanded to be brought into the light. He had a creative urge that led him to make his music and a desire to create, not primarily (Pin Ups perhaps excepted) because he wanted to make money or win approval.

So while we’re waiting for the next Elbow album to arrive, maybe we should wonder how they would fare if they tried to match Bowie’s work ethic and produce 11 classic and important albums in less than a decade.