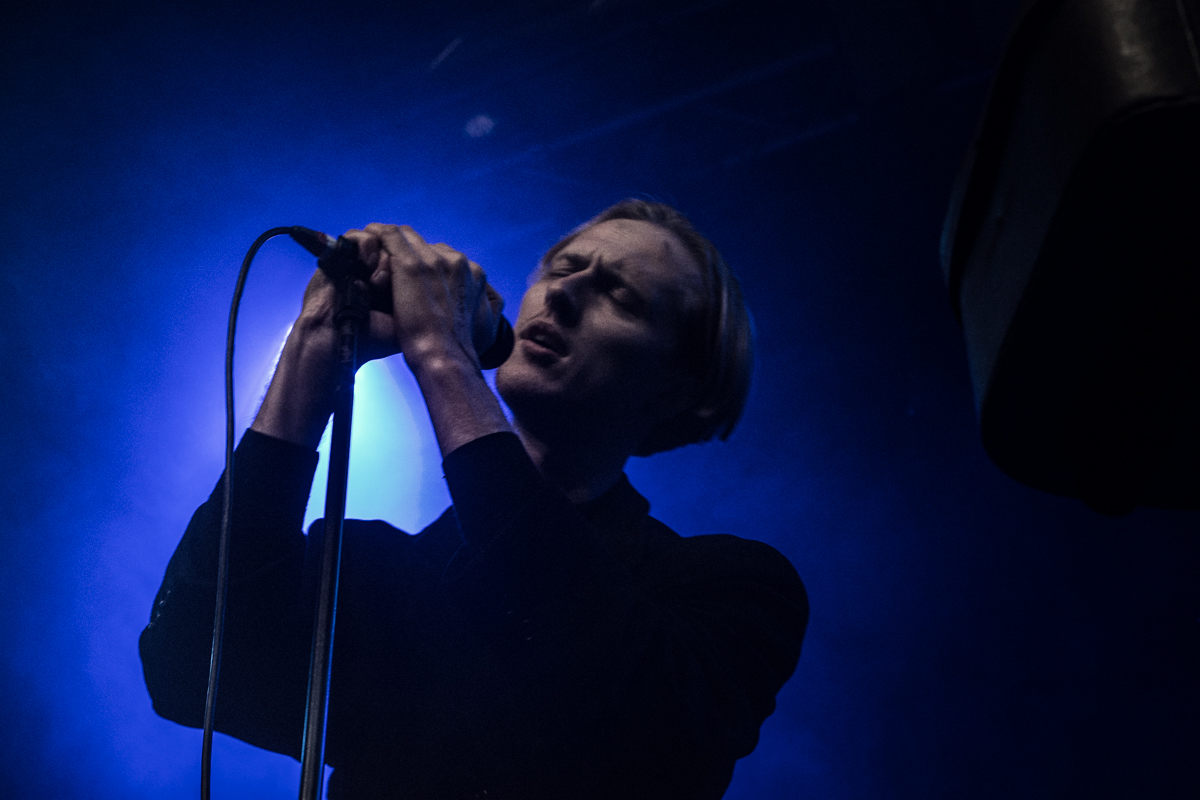 Trying not to hang on to the music of her youth, Getintothis’ Laura Brown found that Eagulls rekindled the lost enthusiasm for new music from her formative years.

Twenty years ago this summer I stood on a little hill at the back of the crowd at Reading Festival. It had been a tip top weekend. I had my pals around me. We’d jeered at Suede, rejected the Saturday headliners of Manic Street Preachers for Eels on the second stage (come on, decisions of youth) and we were waiting for Metallica.

By far and a way the favourite band of our small tribe, Metallica had embarked on a series of UK gigs and this was the second time we’d seen them. We’d see them again in a year at Ozzfest alongside Sepultura. As we stood waiting for them to come on stage we decided we’d stay right where we were. The sun would set, we’d have Metallica playing in front of us, we’d stand side by side and enjoy the moment.

Who were we kidding. We itched as the band walked onstage to The Unforgiven and then launched straight into Master of Puppets. Without even a word we chucked our plastic pint glasses on the ground and jostled into the melee, getting as close as we could to the noise. For the next two hours we leapt, sweated, bandied, rocked, swayed, sang and screamed. The music coursed from head to toe as we shook as one crowd. At one moment I looked up, surrounded by people much bigger than myself. My favourite band was chugging in front of me and I looked at the sky and thought this is exactly where I need to be right now.

17 is often thought to be the best age to have a favourite band. It’s old enough to have made some serious judgements about the merits of different music. Young enough to still have enough hormones wreaking havoc on the psyche to make you love a musician mind, body and soul. You shake with emotion when you hear a particular track.

The following year Placebo released Pure Morning (my taste is nothing if not eclectic) and I would buy the album Without You I’m Nothing from WH Smiths. I put the CD into my Walkman and listened every day on the bus, silent tears on my cheeks as my heart burned every minor chord. I listened to it last year as I walked into work and was surprised but also fond of my emotion. The only needle came from the fact that the album isn’t as good as I remember.

Favourite bands, though, the rush of love and dedication shouldn’t  be something we put away to the back of a cupboard, along with our dog eared gig tickets and low slung jeans. In fact, in this age of uncertainty, of false facts and alternative realities, we need a little bit more love, a little bit of teenage whimsy and daydream, even if just to make the moments before you’ve read what the President has angrily tweeted in the middle of the night last longer.

I don’t mean favourite bands from yesteryear. The bands of your teenage years hold a special candle in your heart. They are your true first loves, the ones who draft the narrative you then implant onto some spotty teen who is nowhere near good enough for you. They’re the ones who teach you about love, loss and desire. If you’re lucky enough they teach you about politics, about opposition and protest. They shape you. Formative seems like such a small word for someone who adds to the foundations of the person you’re going to become.

No, those people never leave you. I mean the love in later life. Perhaps when a relationship in your twenties has gone sour and you suddenly find yourself cast into the world again. The love of later years that feels almost embarrassing, like experimenting with red eyeshadow (pro tip, when you’re over 35 it just brings out the natural red hue of your tired eyes). I mean new love, grown up love. Fresh adoration.

Three years ago my husband came home with a new LP. This band from Leeds he’d heard and thought I might like. I listened. They sounded raw, garagey, like a grunge band from the 90s who’s old tapes had just been discovered. The vocals were rich, almost like The Cure’s Robert Smith. More than that, it was hungry, urgent, determined. They were desperate to be heard and be listened to. He was right. I did like it. It wasn’t just me. Steve Lamacq also dubbed Eagulls his new favourite band too.

It had been a tough couple of years. My dad has passed away in 2012 and I’d found it hard to read novels or to give my attention to anything worth any note. I had flipped and flopped watching films I’d seen before, glancing at articles but never really getting under the skin of anything new. I didn’t listen to much music. It hurt. Eagulls first album rekindled an ember, they reminded me who I was. I wasn’t just a grieving daughter. I wasn’t just existing. I was someone who loved living with passion and art and music played really really loud.

Last year they released a second album, Ullages and I saw them three times. Three. I knew all the words. I sang and swayed and my heart beat faster. It probably helps that on the second album, lead singer George Mitchell’s vocals are deeper and richer than the first. And also that he has this slightly French new wave thing going on.

The third time I saw them last year, at Psych Fest, the gig was so loud I couldn’t hear properly for a couple of days. And do you know what I missed that. I missed the recklessness of standing too close to the stack and screwing up my ears. Much like red wine it isn’t for everyday but it was stupid and painful but it was so completely worth it.

And I love them. I love them. I find myself anxious about their difficult third album. One of their riffs slips into my head whenever I think about them. I’d go and see them pretty much anywhere. I’d write them fan mail but, and this is the only thing stopping me, I’m 36. And who even writes fan mail anymore? Most of all I love their music. I love that I didn’t know it five years ago and that it’s a new layer on what I love. I love that it’s a new story and a new-ish band embarking on that journey and you don’t know where it will go. I love that it’s a new voice I haven’t heard before, a new way of writing, a new way of playing. Four people coming together and making something different.

I unabashedly, wholeheartedly, love it. I’m seeking out early releases and artwork. I will listen to it this afternoon and probably tomorrow and I’ll play it at the weekend while I’m cooking. And it feels awesome. There’s a reason why music was fast and urgent and driven by storytelling in the 80s; we were all terrified of nuclear war. We needed to think about, to daydream about, something else. We needed love and romance. We needed hope. A new band will do that, with the pulsing, vibrant energy of youth they’ll do exactly that. And you’ll fall in love all over again.