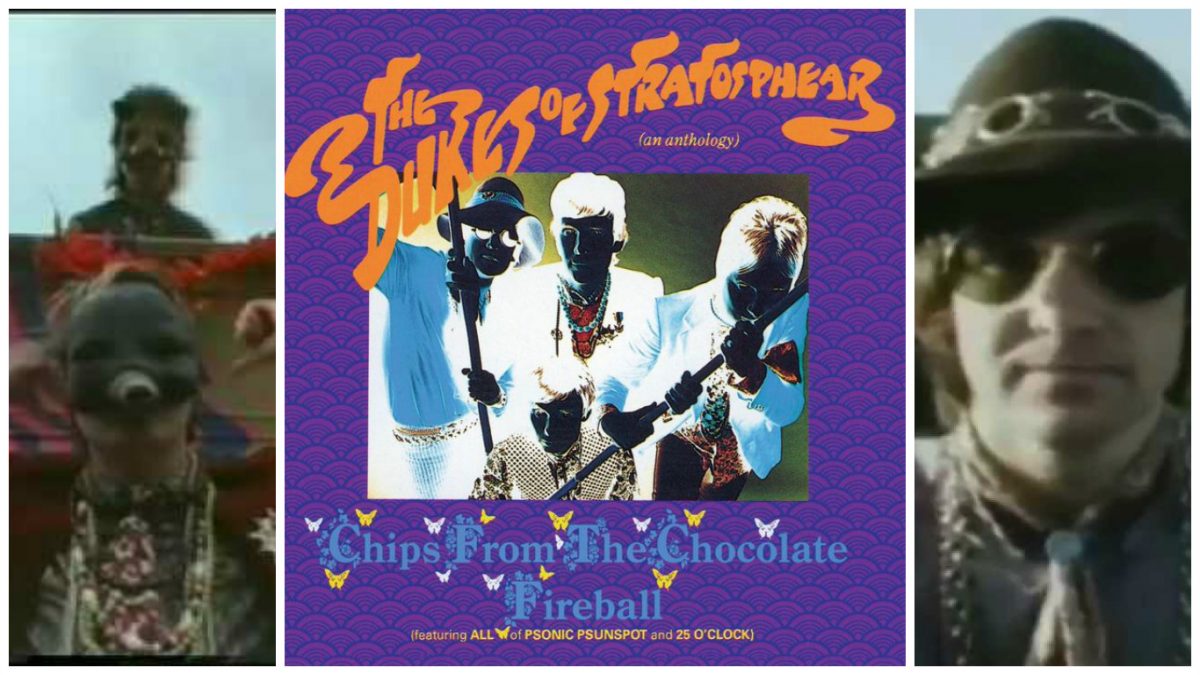 One of the strangest side projects of all time, Getintothis’ Paul Clark re-evaluates XTC’s intriguing Dukes of Stratosphear.

XTC these days seem to have slipped from the consciousness somewhat – they certainly deserve to be less of a footnote that they have become. As a band, and in particular Andy Partridge, their principal songwriter, they have an interesting and diverse back catalogue well worth investigation. Albums such as Skylarking and Oranges & Lemons are genuine classics.

There is an aspect of their past that intrigues and warrants closer attention and one that dispenses with the XTC name altogether. It’s a side project. A phrase that often provokes howls of anguish and cold sweats, but in this instance it’s genuinely a thing of wonder. The Dukes of Stratosphear is that offshoot. Alter egos of XTC.

In their short burst of creativity they released a 12” Vinyl only EP, 25 O’Clock. This came out on April Fool’s Day, 1985 and was so successful that it outsold XTC’s previous release The Big Express. The Vinyl only album Psonic Psunspot was to follow in 1987.

These two releases were anthologised on 1987’s Chips from the Chocolate Fireball, which has been repackaged and rereleased many times since then. It’s this CD compilation that should be everyone’s introduction to the band.

When The Beatles looked towards Sgt Pepper to act as a pseudonymous version of themselves, they only got around to renaming Ringo Starr, as Billy Shears. The Dukes went that bit further and renamed the whole band. So Andy Partridge adopted the moniker of Sir John Johns. Colin Moulding was the Red Curtain, Dave Gregory was otherwise known as Lord Cornelius Plum and Ian Gregory went by the name of E.I.E.I. Owen. Names that evoke memories of The Rutles.

Even producer John Leckie got in on the act. He was credited as Swami Anand Nagara (as a producer he would go on to record The Stone Roses album on the strength of Ian Brown and John Squire being fans of the Dukes). They would’ve got away with the aliases, if the Dukes record company hadn’t blown their cover.

Given the adopted pseudonyms, it was clear that tongues were planted firmly in cheeks when the album was conceived and recorded. The skiving off the day job nature of its genesis is reflected in the tone and the range of the album. It’s an indulgence, but not in a bad way. It’s a remarkable job, considering the first EP only came about as Partridge had time to kill after a production job fell through.

Speaking to Paul du Noyer in Word Magazine in 2009, Partridge was positive about the whole experience and the reason for doing it:

“Doing the Dukes was like a fancy dress party. You could go and make an arse of yourself because you didn’t have to be you. ‘That’s not me, it’s somebody dressed as a chicken.’

This is no Spinal Tap. These are classic songs that wouldn’t sound out-of-place on a compilation of artists from the era that they are paying tribute to. You could listen to the Dukes on a playlist that shuffled Syd Barrett-era Pink Floyd, the Small Faces’ Ogden’s Nut Gone Flake, latter day Beatles, The Move, Yardbirds and numerous other bands from the period and this wouldn’t jar.

There is something of a contradiction describing something that was homage to the sixties and stating that it was almost before its time. When it was released in the mid-eighties, it came out against a backdrop of synths and pop music that had seemingly left the sixties behind. If the Dukes had appeared ten years later they would have been swept up in that wave of revivalism alongside bands like Kula Shaker and Oasis. Who knows their songs may have gained a greater audience if that had been the case?

It’s clear that even songwriters like Tears For Fears’ Roland Orzabal, have looked to these songs and used them as an inspiration. Listen to the backwards drum break on Mole from the Ministry and then listen to the opening drum pattern on the Sowing the Seeds of Love. It’s almost a carbon copy.

So what about the songs? In all, 16 songs were anthologised for the original Chips from the Chocolate Fireball release. That has since swelled with the reissues, that now includes outtakes and other curios.

The album opens with the eponymous track from the debut EP 25 O’Clock. It would slot seamlessly onto the famous Nuggets compilation. It opens with old grandfather clock ticking away, before it cranks the sixties upto eleven. It’s a blend of McCartney walking bass patterns and swirling Ray Manzarak keyboards that builds to a rousing coda.

What in the World?? is a note perfect take of The Beatles’ Rain. In fact it’s so retro-futuristic (if that’s a phrase) it sounds like something that could have appeared on The Beatles Love album. It could almost be a remix of something of Revolver.

The single The Mole from the Ministry with its I Am the Walrus piano patterns builds to a spiralling psychedelic conclusion. This song is the perfect representation of what the album hoped to achieve. It’s equally redolent video is evocative of the era that the band are doffing their Breton caps to.

A Good Man Albert Brown wouldn’t be out of place if it had turned up on the The Kinks Are the Village Green Preservation Society album. It was another single release for the band that should have done better than it did at the time.

The album crams in as many sixties references in as it possible can before it ends with Pale and Precious. It is interesting that the Dukes are predominately celebrating the English tradition of psychedelia. The final track is possibly the only overtly American influenced tune and it feels like it could be an outtake from Brian Wilson’s Smile sessions. It’s a beautifully rendered pastiche of all things Beach Boys. Even on a cold November evening, the harmonies, chiming bells evoke something truly Californian.

This is a collection of songs that needs to be listened to back-to-back, preferably on a crackling vinyl record. You can sit back and enjoy the songs without knowing the source material or you can award yourself trainspotter points for identifying the influences of the band.

If you don’t own any XTC albums, and you like your music with a psychedelic-edge Chips from the Chocolate Fireball is a good place to start embracing the genius of Andy Partridge.