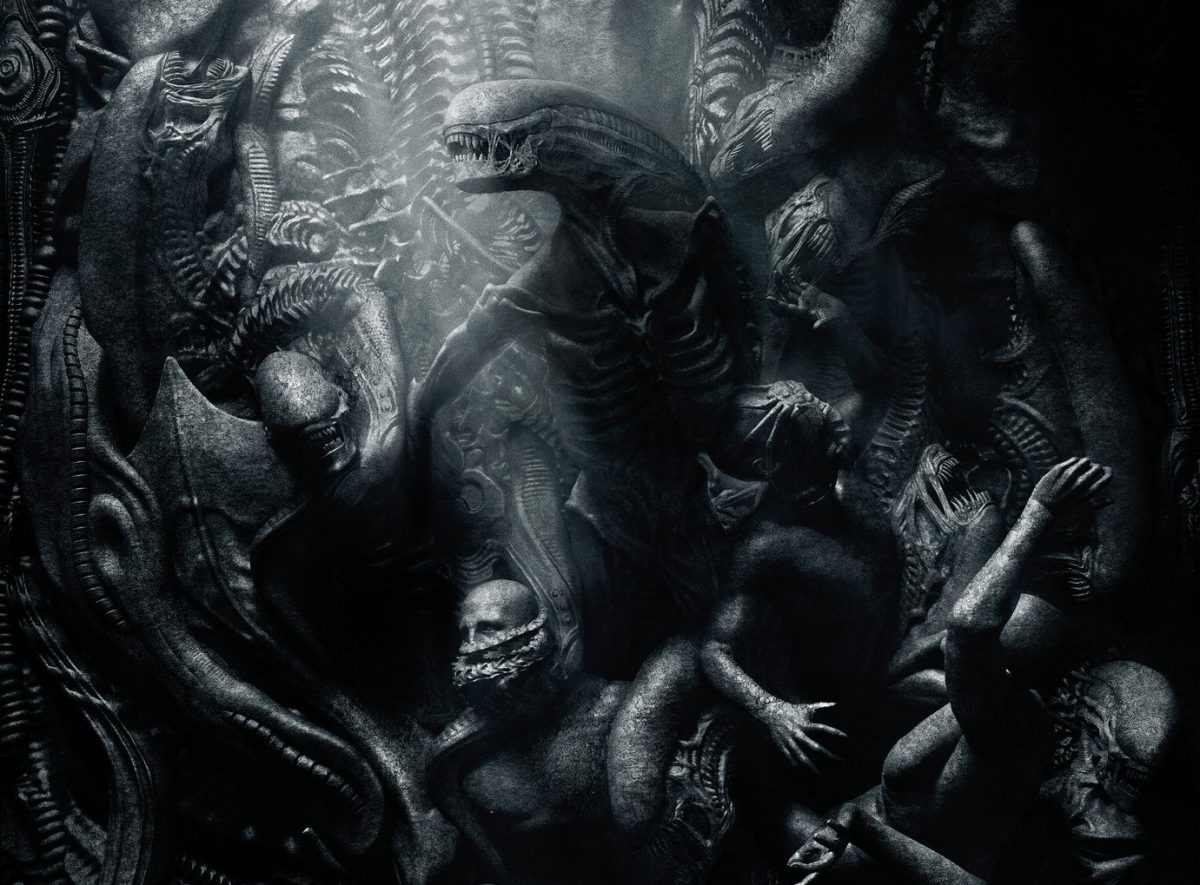 With Ridley Scott’s Alien: Covenant due for release on May 12, Getintothis’ Laurence Thompson wonders whether it can live up to the hype.

In 1979, two years after Star Wars ruined everything with its cretinous ur-fascist infantilism and three years after Alejandro Jodorowsky, Dave O’Bannon, H.R. Giger, Chris Foss, Salvador Dali, Tangerine Dream, Orson Welles, Pink Floyd, Mobieus, Mick Jagger, and Mike Oldfield failed to save the world by adapting Dune and hence forcibly evolving us all to a Buddha-level of cosmic consciousness, the greatest mainstream sci-fi flick since 2001: A Space Odyssey was released.

O’Bannon, disheartened by Dune’s continual non-existence, possibly telepathically mindfucked by Jodorowsky, and high to the point of psychosis on a potent mix of Giger, Foss, and Moebius‘ artwork; B-movies such as The Thing From Another World (1951, later remade into John Carpenter’s The Thing in 1982), Forbidden Planet (1956), The Planet of the Vampires (1965); his own work with Carpenter on Dark Star (1974); possibly (and possibly litigiously) David Cronenberg’s Shivers (1975); his own experiences with Crohn’s disease; and drugs, had forged all these disparate elements into his screenwriting masterwork: Starbeast. Wisely renamed Alien (and the protagonist Ripley re-cast as female), the erstwhile Starbeast picked up little-known Durhamite director Ridley Scott and the rest is history.

What I’ve just given you is the founding creation myth of Alien and its coven of celestial engineers. Though technically sound, it’s complicated, contradictory, contentious, badly-related nonsense.

I could swear to you it makes sense if you’d only put the effort in, but you’d be forgiven for wondering if it was worth it. It’s the Prometheus (2012) of critical opening paragraphs.

The internet is awash with convoluted video explanations for Prometheus, Scott’s return to the Alien franchise. The initial excitement around the movie was understandable – since their break-up, both parties had gone from bad to worse.

The fall of modern movie themes – where did they go wrong?

Yes, we all love Alien (1986), but its abandonment of both Giger’s visionary design work and the strong working-class elements of the original left us with merely a very good James Cameron action movie that ends on far too friendly a note – you can actually forgive David Fincher’s otherwise atrocious Alien 3 for unceremoniously killing off Newt and Hicks early doors.

As if to prove the series was a graveyard for otherwise respected directors, Jean-Pierre “Amélie” Jeunet then turned in the truly abominable Alien Resurrection. The less said about the Predator crossovers, the better.

Scott has also waded through a fair share of his own creative faeces. The redoubtable Blade Runner aside, his CV reads like the shopping list of a demon waiting to subject me to a cinematic Ludovico technique when I finally get to Hell: Kingdom of Heaven, Black Hawk Down, Exodus: Gods and Kings, Robin Hood, Body of Lies, A Good Year… I even hate Gladiator for killing Oliver Reed and replacing him with the perfectly unsuitable Russell Crowe.

But like two estranged young lovers grown old, fat, ugly, blind, and useless who decide to get back together, Scott and Prometheus did not beautiful music make. Despite a marvellous cast and brilliant special effects, the sort of, not quite prequel to Alien was somehow worse than Resurrection; on balance, I think I’d rather re-watch Aliens vs Predator 2.

Now we have a sequel, with the appallingly ostentatious title of Alien: Covenant – apparently indicative of the epic gnostic parable the once director of Legend wishes to bestow on we mere mortals. Obviously, while nobody liked Prometheus, some sadistic studio exec saw the potential in revamping the franchise as something less like the viciously lowbrow AvP and more like the wider-appealing low-middlebrow Marvel movies, Star Trek reboots, Disney Star Wars sequels etc., i.e. as another (albeit more violent) SF action franchise.

And while the trailers for Covenant show plenty of Prometheus’s DNA – portentous dialogue, Noomi Rapace, sub-Roger Deakin outdoor photography, a bleach-blonde Michael Fassbender – there’s some evidence of the dark metallic corridors and twisting anatomy of the 1979 original, adapted for an audience now well-trained to expect safely franchised mediocrity flavoured with pinches of nostalgia.

That Scott has been so willing to alter his quasi-religious vision after the poor critical reaction to Prometheus and the pressure to bring the follow up more forcefully under the Alien banner may be because none of this is really his vision, after all. Alien was the brainchild of a Giger-impregnated O’Bannon, and Scott was just the highly skilled midwife.

This isn’t to say Covenant definitely won’t be worth a watch – it’s perhaps interesting to note from the trailers that the un-unionised space-truckers of the original have been replaced by white wine sipping middle-class couples just waiting to be torn to bits, and there are surely plenty of jump-scares and lovely viscera incoming.

But the odds are heavily stacked against it being anything more than well-marketed pabulum.