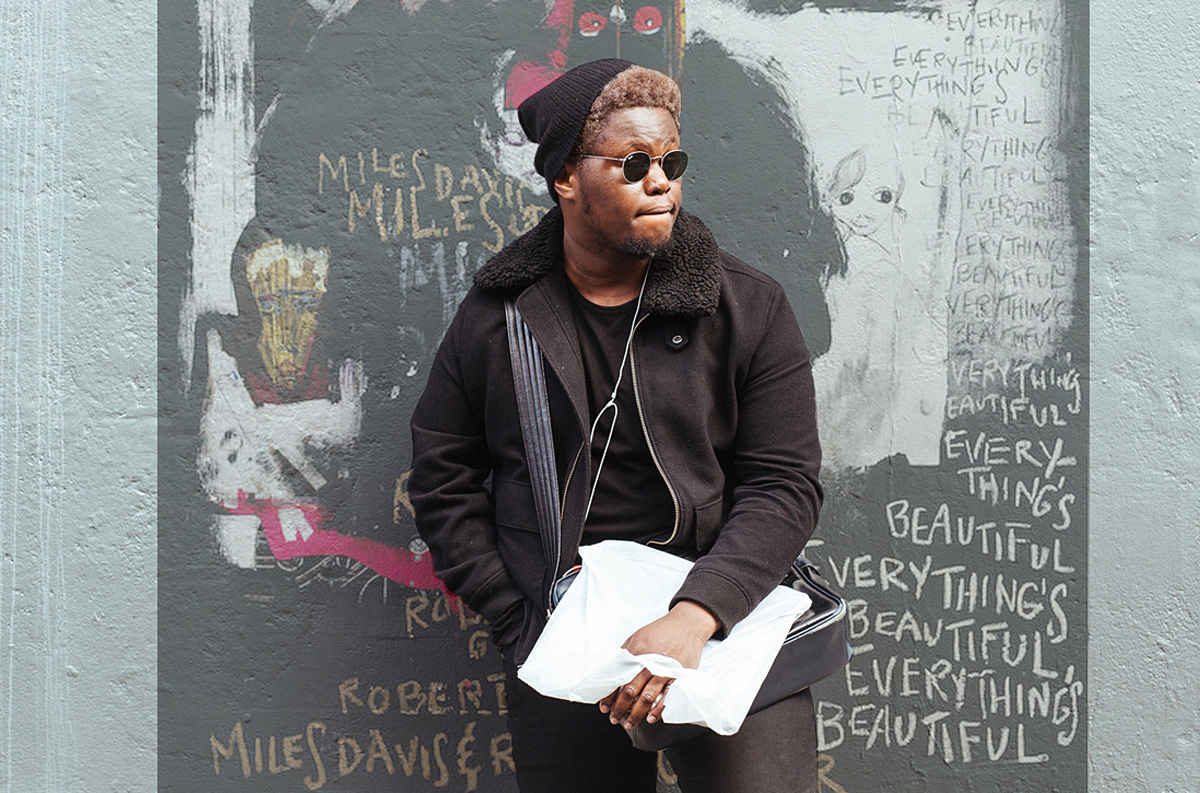 Now nominated for the GIT Award for a second time, Getintothis’ Shaun Ponsonby talks to rising soul star XamVolo about his influences, image and future plans.

XamVolo – Sam Folorunsho to his friends – was first nominated for the GIT Award two years ago.

Back then he was a student of architecture, just starting out in this whole crazy music thing. But sure enough, he gained enough plaudits early on to be nominated alongside established names such as Jane Weaver, Circa Waves and The Sundowners.

“I was surprised at the nomination last time,” he admits. “Most of the other nominees had done a lot more shows than me at that time. I’ve really grown since then though, performing at the likes of  LIMF, Threshold and Sound City really helped a lot”.

It would be an understatement to say things have taken off since then. He signed to Decca last June – a label that was oh so important to the development of rock & roll in the UK. The deal was instigated by Dave Monks from BBC Radio Merseyside’s Introducing strand; “[Dave] sent some things to Decca. BBC Introducing is no joke, people do listen. Especially when you have someone like Dave who really does care.”

Funnily enough, even before moving to Liverpool for his architecture degree, he was looking for a way to tap into the region’s music scene. In doing so, he simply searched for “Liverpool music scene” on Google, and lo and behold Getintothis popped up first. Digging into the site, he discovered the GIT Award, with names like Esco Williams letting him know that this was a scene in which he could flourish.

When speaking with Sam, it is striking how different he is in person compared to his stage persona. When performing, he takes on an almost Morpheus persona; uber cool and aloof, decked out in a long black leather jacket and sunglasses. 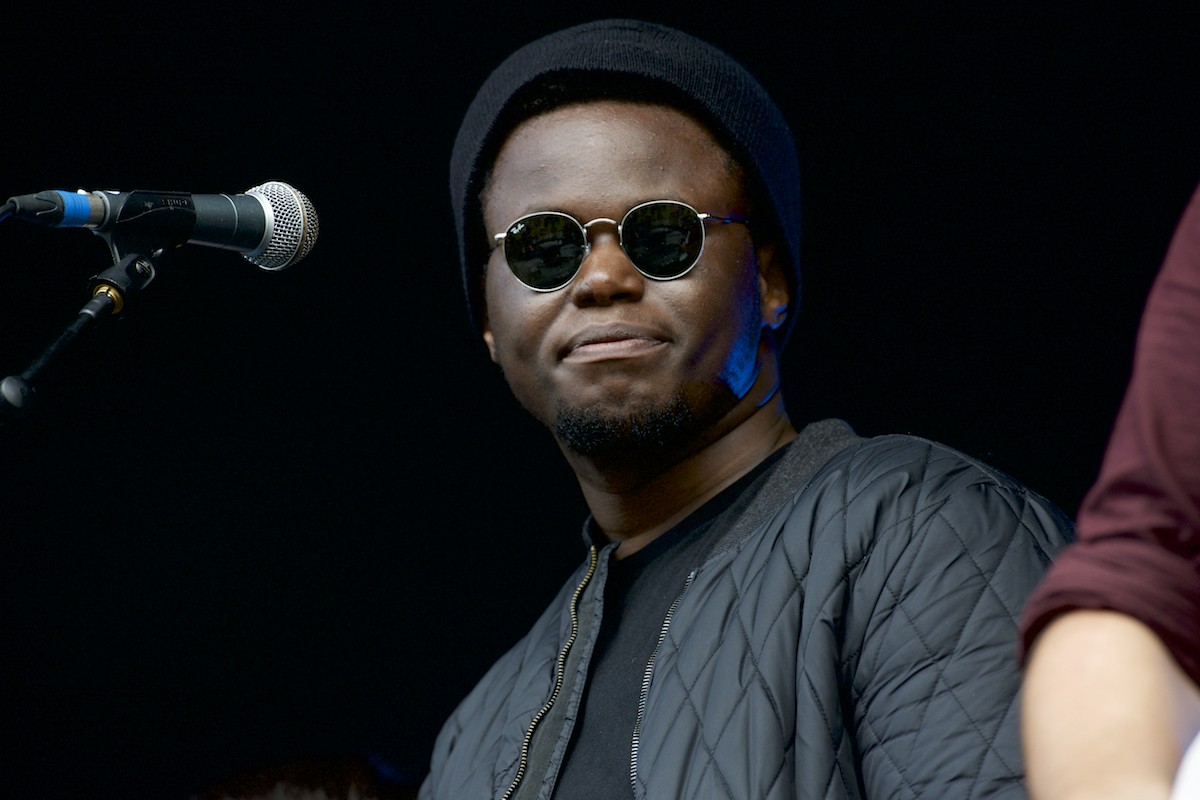 Face to face, though, he is warm, affable and instantly likeable. It’s a stark contrast to his stage persona, and we wonder if his image is akin to the Roy Orbison technique. Orbison famously suffered from stage fright and his all-black and sunglasses image was his way of dealing with it. “I did used to get mad stage fright, but now I just say whatever happens, happens”, Sam responds. “The image is almost overcompensating. I used to dress in very bright colours all the time.  I remember my first day in Year 12, I wore all-purple. I can’t remember who said what, but after a while I started reverting to the all-black.”

He appears older and more mature than his years, and yet his personality and drive are infectious. A constant smile adorns his face as he talks about his formative years and how he discovered his penchant for music via the unconventional route of software; “When I was a kid, everyone was playing football but I was obsessed with Photoshop. Then one day my friend Jeremiah gave me Fruit Loops 7. I installed it on my laptop in my room and just stayed on it for about seven hours.”

As much as the labouring has paid off, most notably with his Decca contract but also with the following he has amassed, Sam remains down to Earth. In his previous GIT Award profile, he admitted that when he was younger he had a much higher opinion of himself; “I never said it but I thought I was better than X, Y and Z. Then you grow up and improve and you realise how far you have left to go…the higher you go, the further away you realise the horizon is – someone said to me once”.

Perhaps this explains why he is so coy and almost matter of fact about his talents. Our interview took place a few days before Sam headlined the Ditto Live event at Camp and Furnace. We walked past a poster for the event on our way to meet him, his name in large letters on a huge street poster. We asked him if it was strange seeing his name in big letters on posters throughout the town, but he doesn’t think about it too much. “I’m not really headlining,” he modestly dismisses. “I’m just on last. I’m glad it’s there. I’ve always been at the bottom or second tier. I just look at it as a progress thing.”

His performance at the event packed out the venue, showing that he was undoubtedly the must-see artist on that bill. Getintothis marvelled at him “nonchalantly working the atmosphere before hitting what could have been potentially the highest vocal pitch of the evening with ease.” And yet Sam still seems quite unfased about his talent for live performance.

He recently completed an 11-date nationwide tour with label mate Aurora, which included dates at historic venues such as the Manchester Ritz. “The band loved it, but I was a bit more focused on the show. As a support act, I’m playing a role. You don’t want to outshine the headliner.  Having said that, the Oxford date was probably the best show I have ever played.”

“It’s funny, it’s on the days where I don’t think I can give a million per cent that people I know are clamouring to get to the show! It’s never the times I feel completely on it!”

Sam’s influences are further reaching than you might consider on first listen. Although the impact of neo soul is clear in his work, there is an understanding that all great musicians must have a breadth of musical knowledge. During our conversation, he talks about a fondness for progressive rock, Ariana Grande, Paramore and Tori Kelly (he met her at the legendary Capitol Records building on Hollywood Boulevard, sheepishly uttering “You’re damn good”, before quickly disappearing before she could respond!) 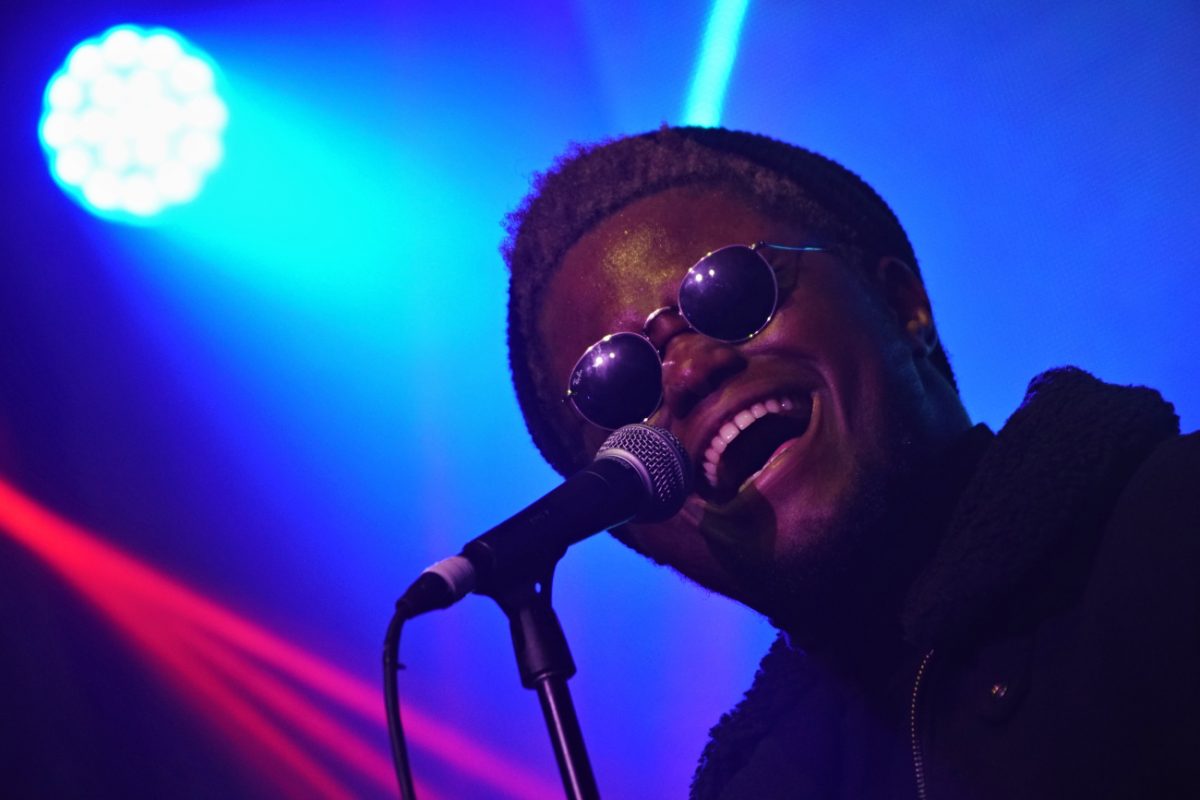 But listening carefully, it does show up in his music. His material is a varied melting pot that comes out sounding unique. Crucially, XamVolo always sounds like XamVolo.

Right now, Sam is focused on his upcoming project. He played the first single for us; Old Soul is an expert mesh of the old and the new. There are definite echoes of neo soul and jazz, but with a very contemporary production, the beats in particular being right in the now.

When listening to the track, it struck us how much this one tune somehow brought together much of our conversation. The image of Sam hauled up in his bedroom on Fruit Loops is potent as he sings the chorus line “I spend my days listening to old soul”. Noting that he had earlier mentioned a fondness for progressive rock, we couldn’t help but notice his scatting along to an acoustic guitar solo being reminiscent of Pink Floyd’s Wish You Were Here.

Similarly, he tells us that the whole project is something of a concept album, with Sam portraying the lead character in the first person, a very proggy move in itself. The character isn’t XamVolo, but his own life experience naturally comes into play when it came to formulating the character, though he is staying fairly tight lipped on it at the moment. 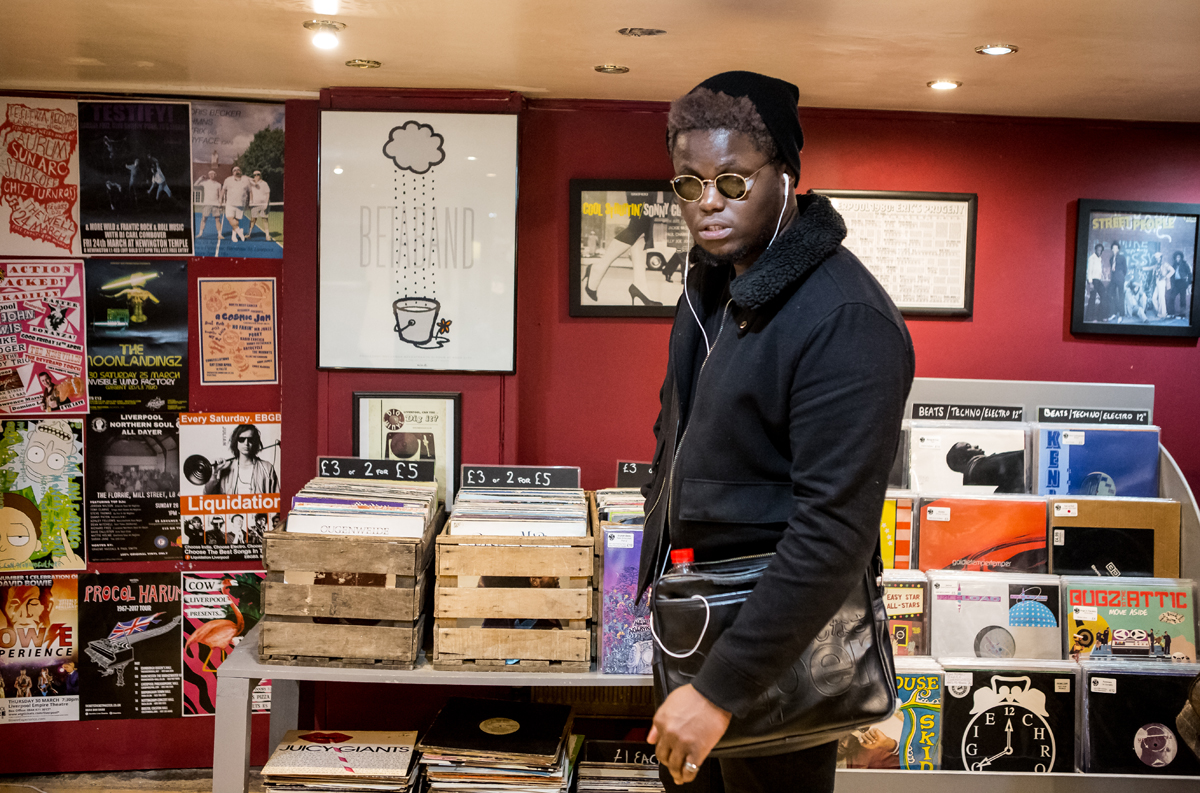 Of Old Soul, Sam says “My favourites are never the singles. I like them, but I’m after the artier, leftfield stuff, but they won’t be out for a while yet. If the campaign goes well, there will be a lot of music on the way. I want to do it right, and I have a great team behind me with my management and Decca.”

“We’re planning a lot around this project. There are two or three motifs that we’re exploring, both visually in terms of artwork and video and for the live show.”

Although Sam seems to acknowledge how far he has come as a live performer, he seems a little reserved in his attitude towards it. He knows exactly what he wants to pursue. He knows what his goal is. He knows where he wants to end up.

“The live shows are important, and I know I have to do them, but I am really interested in is knowing how to make music, how to start with a basic track and build it. When we’re done with this project, I would really like to do is build a production portfolio. There is a lot of great music in this city, but it is mainly the guitar bands who get the attention. There are a lot of great soul acts right now, and I have the means, the time and the energy to help, I think I could offer something interesting.”

No doubt the link with Decca has opened doors for him where this goal is a very serious possibility, song writing sessions in Los Angeles among them. But judging by our conversation, the most significant benefit that he has seen from the deal so far may have been how it has aided his personal development. No longer does he view himself as a control freak – even if it does drive him a little crazy. 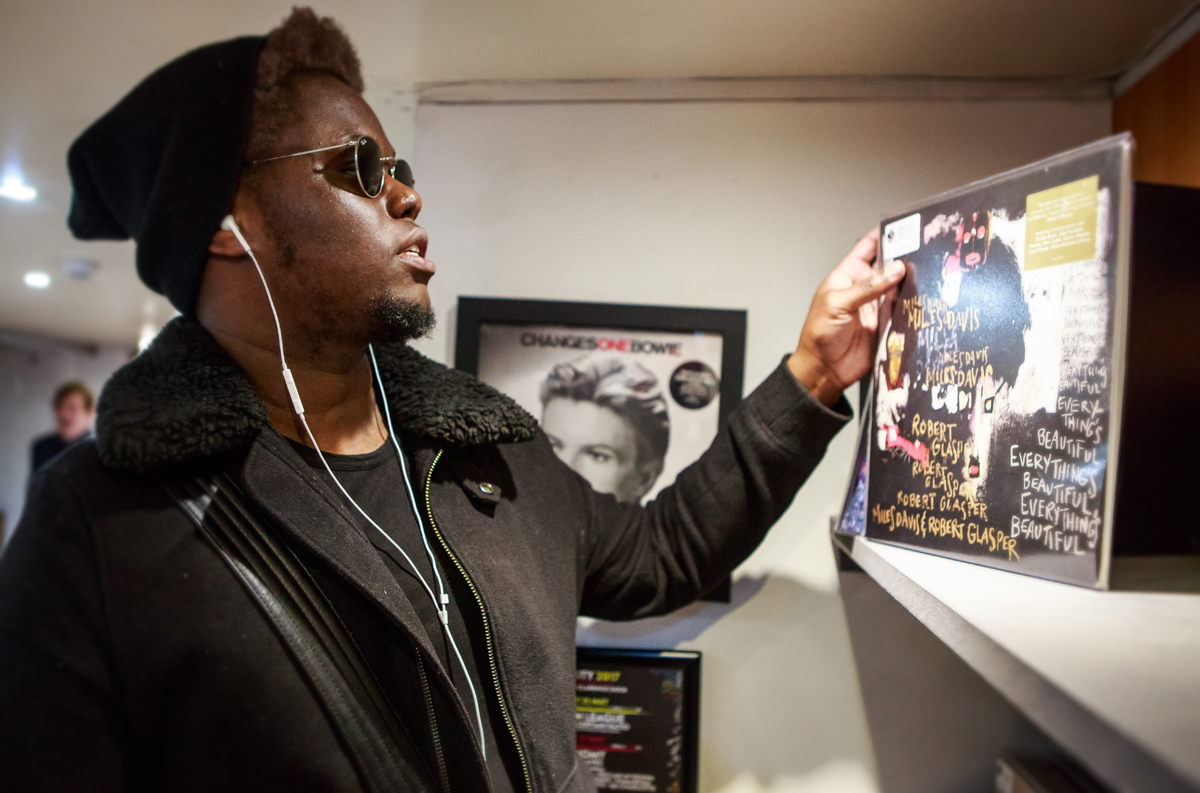 “It has been interesting working with more people. This isn’t a hobby for me, and I’ve finally accepted that I can’t do everything myself. Getting people in to do the artwork and social media, for example. It won’t be the same as what I would do, but I’m fine with that.”

“There are more viewpoints, more depth. I get a better sense of how to line things up, and think harder about things that I had previously brushed off.”

This latter point seems central to Sam’s personality. He strikes us as somebody always willing to learn, striving for the next challenge. He has been labouring on the new project for a long time, and seems to be revved up to finally unleash it in all of its multimedia glory. Yet he remains modest, saying only “I hope people are into it.”

Judging by his rise so far, we think it is inevitable. XamVolo is going places. His journey is only beginning.