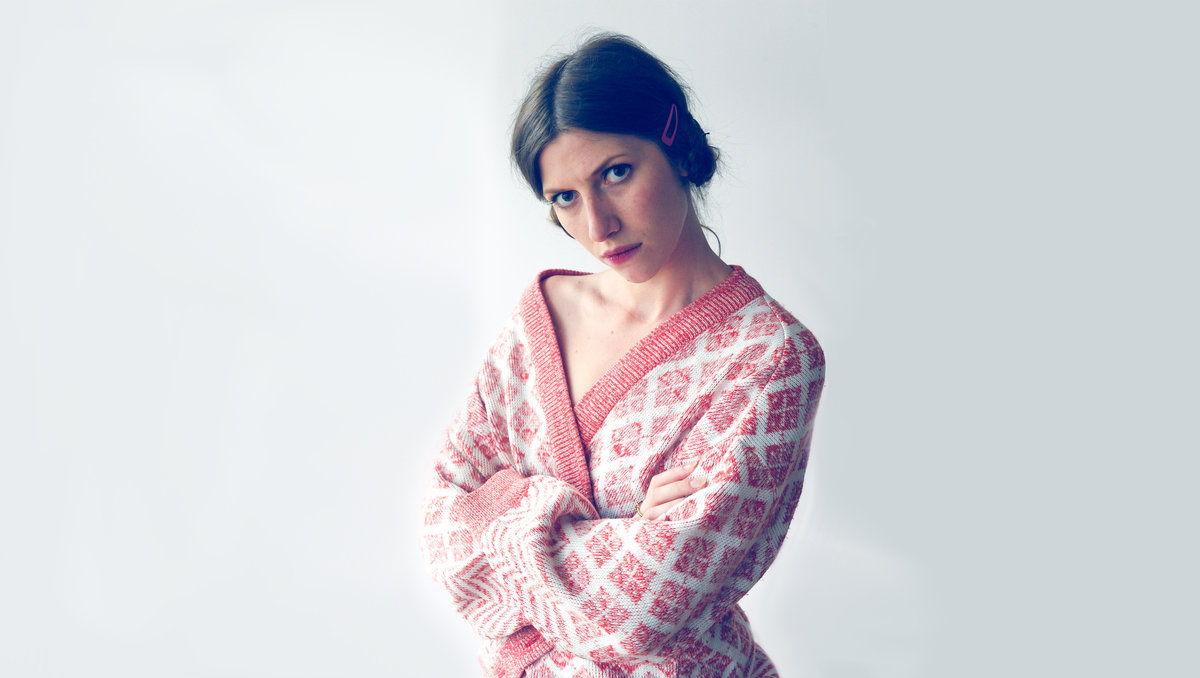 Getintothis’ Matthew Wood hops around the musical globe to bring you another fresh batch of new music.

A truly captivating piece of art here from New-Zealand’s Aldous Harding, I first heard it without the visuals and was enchanted by her generously smooth vocal and somewhat melancholy finger-picking. There is a hollow aspect to the track that allows Harding to paint a lyrical picture.

Combine this with the music video directed by Charlotte Evans and you gather that Harding is expressing more than the lyrics may first suggest. There’s a form of distaste in her dance moves, dressed like the Playboy models in Apocalypse Now, she often looks robotic and puppet-like as her body jaunts and flails, pulling pistols from their holsters, while at other times she looks genuinely engaged in her routine.

Many questions arise upon multiple listens of this one, her lyrics are longing and heartfelt, her dancing provocative yet perhaps a tad disconcerting, it’s a puzzle and it’s honestly fantastic. Step into the wacky world of Harding and enjoy the ride!

The mighty psychedelic quintet return with a monstrous tune, their first since 2014’s Luminous and they’re darker and more brooding than ever.

Standing thousands of feet tall, gurgling and pulsing mechanically like an industrial beast, Machine is a menacing number that rattled and malfunctions into life before that familiar vocal of Faris Badwan cruises into place, announcing ‘Your smile, is nothing to live for‘, immediately adding to the harsh, rumbling atmosphere.

As you listen you can almost picture grotesque army of robots moving through the innards of a dingy factory on a rickety conveyer-belt. Joshua Hayward’s is as notable as ever, sourcing otherworldly sounds through his astounding knack for creating D.I.Y. pedals.

The track falls into a simmering break before launching into yet another brutal blast of abrasive industrial screams while Badwan’s vocal remains composed assuring us ‘you will never be.. more than a machine‘. It’s a certified monolith of a track, that only gets better with every listen.

Dom Robinson – Pieces Of You

A leading figure on the BBC Introducing scene, Leeds-based singer-songwriter, Dom Robinson offers a sincere brand of folk, recalling the wistful wanderings of Bon Iver and the acoustic joy Ben Howard brings for many.

His latest single, Pieces Of You ushers us gently into his world, glimmering acoustics combine with his multi-layered vocal for an encapsulating listen. He retains elements of his D.I.Y. aesthetic with lackluster vocal delivery but he fleshes this out with some gorgeous layers of sumptuous strings.

A rising talent no doubt and another impressive name from the city of Leeds… keep ’em coming!

Meatraffle are a tough band to pin down, forming out of the genuine attempt to start a meat raffle, they groove on the left with the likes of Sleaford Mods and Fat White Family (who regard them as the best band in Britain) reveling in the real to life relationships formed in dank pubs and dark back alleys.

Brother sees front-man Zsa Zsa Sapien get the ball rolling with some modestly triumphant blasts of his trumpet before launching into a energetic chorus of ‘You’re like a bruvva from anuvva muvva‘. The distinct tone ans sloppy aesthetic epitomises the band’s message and flicks the V’s to the establishment, it’s ‘psychedelic, socialist, utopian, death ragga, erroneous funk, trapdoor jazz, bastard musik‘ and I don’t think anyone could put it better themselves.

Johnny Kills – Let’s Talk About Me

Funnily enough when you Google ‘Johnny Kills’ you’ll get Juan Mata’s Wiki and a bunch of articles of the Spanish midfielder, but more importantly you’ll find this garage-surf trio harnessing a passion for all things frantic and fuzzy.

Their debut single Let’s Talk About Me is a manic burst of garage rock, recalling early Wavves and Wold Alice with their sucker-punch approach and fun-loving aesthetic. Meaty, quick-fire chord shifts ensure this one crashes into your system without warning, youthful-punk backing vocals joining the melee, making it a track perfect for a live, intimate setting.

Keep your ears peeled for these fellas on your radar.

Chaz Bundick aka Toro Y Moi returns for his fifth record titled Boo Boo. Confessing at times he’s struggled to come to terms with his fame – his latest album confronts his fears, delving into his own sense of musical ‘space‘.

Girl Like You does indeed feel spacious, opening on some woozy crystal synths before a muffled jungle beat enters, providing a unique groove. Bundick has become renowned for his sweet falsetto delivery and he immediately hits us with a lyrical hook. A Frank Ocean influence becomes apparent as his vocals develop, toying with auto-tune and weaving complex melodic patterns.

many have already made comparisons with the ubiquitous Travis Scott and the influence is apparent, but Bundick’s tracks are forever welcoming, sweet as well as nourishing; Bundick remains honest and innocent and his musical voice now calls beyond the realms of chillwave, spanning genres with his consistent application of formidable song-writing talent.

Boo Boo is out on Carpark Records, July 7.

A band I thought had fizzled out since it’s five years since their debut album, Elster, but lucky for us experimental dream pop outifit, Trailer Trash Tracys are here for round two, and what they have in store is indeed worth the wait.

Eden Machine opens like a ‘Breaking News’ interruption from a 1980’s CNN report, swirling frantically and spiraling into oriental string plucks and relaxing into a toe-tapping groove.

Suzanne Aztoria’s vocal glides along fluidly amid isolated pitch-shifting rumbles of drums and more oriental plonks that create a distinct ambiance like a tasteful water fountain trickling in the background. Big bursts of synth and powerful guitar strokes give this a Tame Impala’s Lonersim feel at times but TTT refuse to let things get too out of control.

Their upcoming album Althaea is out August 11.

Fujiya Miyagi have been experimenting with electronica for many years, producing a sound heavily steeped in German influences such as Kraftwerk and Neu! but fashioning their own unique sound in Brighton, UK.

Impossible Objects Of Desire, taken from their recently released self-titled album is laden with groove and arpeggio chords synonymous with the likes of the late house legend, Frankie Knuckles and of New York’s finest dance-punk icon, LCD Soundsystem.

The band continue to craft their songwriting to fine standards and this one delves into the effect of music on the human body and soul – bringing one to life and making us fall in love with mere longitudinal waves.

You can stream their full album on Soundcloud.

I’ve come to the conclusion that PNKSLM never fails, and here’s another reason why. Hailing from Malmö, Sweden, Hater produce valiant, imperfect pop built on jangling chords, pounding rhythms and a the raw vocal of Caroline Landahl.

Coming Down is taken from the band’s debut LP, You Tried which premiered earlier this year and has earned them slots at Denmark’s finest alternative rock festival, Roskilde. What’s magnificent about this one is the rawness and unpolished yet heartfelt finish; Landahl’s vocal quivers with emotion, often breaking while the band create a ferocious storm of jarring guitar chords around her.

As they shift into the chorus, we hear the band’s ability to uplift; simmering ride cymbals and Landahl’s vocal reach new heights before a simple yet majestic guitar solo adds a response.

Another capsule of pure bliss from Connecticut trio, Landing. They won me over in Singles Club #150 earning themselves Single of the Week and their latest is as irresistible as the last.

Taken from their new three-track EP titled Taeppe, Tape is a stripped down blend of shoegaze tiptoeing along on delicate strings while sonic strums of guitar pulse like ripples through a shimmering lake. Repetition is key in this one with vocalist Adrienne Snow’s hushed tones joining with the heavenly soundscape for a track that seems to blur boundaries between waking life and our dreams.

For anyone struggling to sleep, let this one wash over your weary head and take you to your own slice of heaven.

Embracing the cycle of creation and destruction and striving for change, French-Cuban twin sisters Ibeyi channel positive vibrations in their lates ttrack, Away Away.

Synthesising their Yoruba roots with polished production, the duo lay down uplifting chants in the Yoruba language, paying homage to Yoruba deity, or ‘Orisha’ Agayu, the ferryman spirit who helps one to cross the river.

You won’t find a genre-spanning, globe-trotting groove like this one anywhere else I assure you.