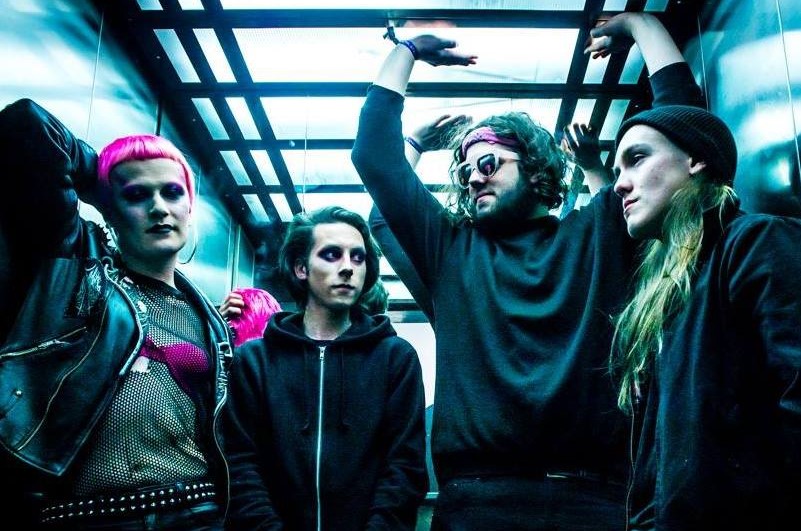 Liverpool’s Queen Zee and the Sasstones unleash their second single, Getintothis’ Denise Hodgkinson has the exclusive on another fabulously furious dose of glam-punk.

Hot on the heels of the glittering debut single Sissy Fists, Liverpool’s Queen Zee and the Sasstones have unleashed the follow up, Sass Or Die.

Fronted by glam-punk peacock Queen Zee, the colourful, noisy, screamy but surprisingly tuneful wall of sound has hints of My Bloody Valentine and Sonic Youth.

Zee’s lyrics are personal and political but not preachy, backed by chainsaw guitars and a pounding bass beat.

This short and sweet single is an anthem to individuality with howling vocals which give way to a chanting rant: “I wanna do it for the rest of my life, I wanna do it, just sass or die”. The echo-laden drums and tambourine bring to mind The Horrors with a smidgen of The Cramps thrown in for good measure.

In their brief career, the band have started to develop a fiercely loyal and exotic following which grows with every frenzied gig. Since their first gig at Drop the Dumbulls in March, they have been through a few line-up changes but now are a more settled bunch of Sasstones.

Queen Zee isn’t just a sassy face, singing and playing guitar and keyboards, backed by Em Dee on guitar, Frankie French on bass and vocals, Courtney H8 on keyboards and vocals, and Lily Bit Furious on drums. On record, they exude an air of controlled chaos with a pure punk ethic combined with a glam gloss. At their shows, they forgo the control.

Queen Zee and The Sasstones were named in the 17 best bands from Liverpool Sound City 2017 – but who else made the cut?

Having performed more gigs in the past few months than some do in a year, including a spot at this year’s Threshold Festival, Manchester Punk Festival, Liverpool Sound City and a couple of shows in Amsterdam, they are about to spread their wings further afield, supporting Cabbage on a national tour. This definitely feels like the beginning of something extraordinary.

See Queen Zee & The Sasstones live on the following dates: