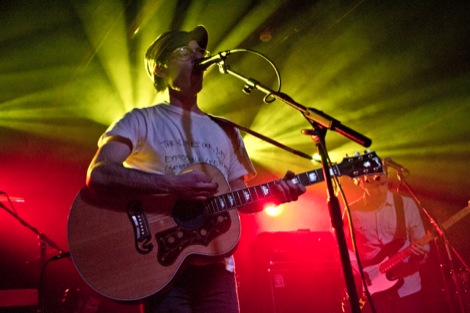 Clap Your Hands Say Yeah celebrate a milestone with a UK tour that includes a Liverpool date and Getintothis’ Will Neville leads the applause for the off-kilter indie combo.

Clap Your Hands Say Yeah’s second album Some Loud Thunder is being reissued on November 24 (digitally, on vinyl and CD), ten years after its initial release, with five bonus live tracks.

To promote this, the Brooklyn-based outfit led by Alec Ounsworth, who were one of the first bands to rise to prominence on the back of internet buzz, are playing a series of dates in the UK next May, including a stop-off in Liverpool at the Arts Club, their first date in the city for five years.

These shows promise to feature the whole of their sophomore album, no doubt alongside choice cuts from their four other long players.

Ounsworth recently said, “Some Loud Thunder was an album written mostly as a reaction to the not unwelcome but still uncomfortable great interest in the band’s first album, Clap Your Hands Say Yeah.”

“I think that this album documents a band that was comfortable taking big chances, somewhat aware of the consequences of taking chances (in an industry that often seems allergic to veering off the beaten path) but ignoring them all the same.  For this, maybe most of all, I am very proud of this album.”

Tickets are on sale now for all their British dates next spring: