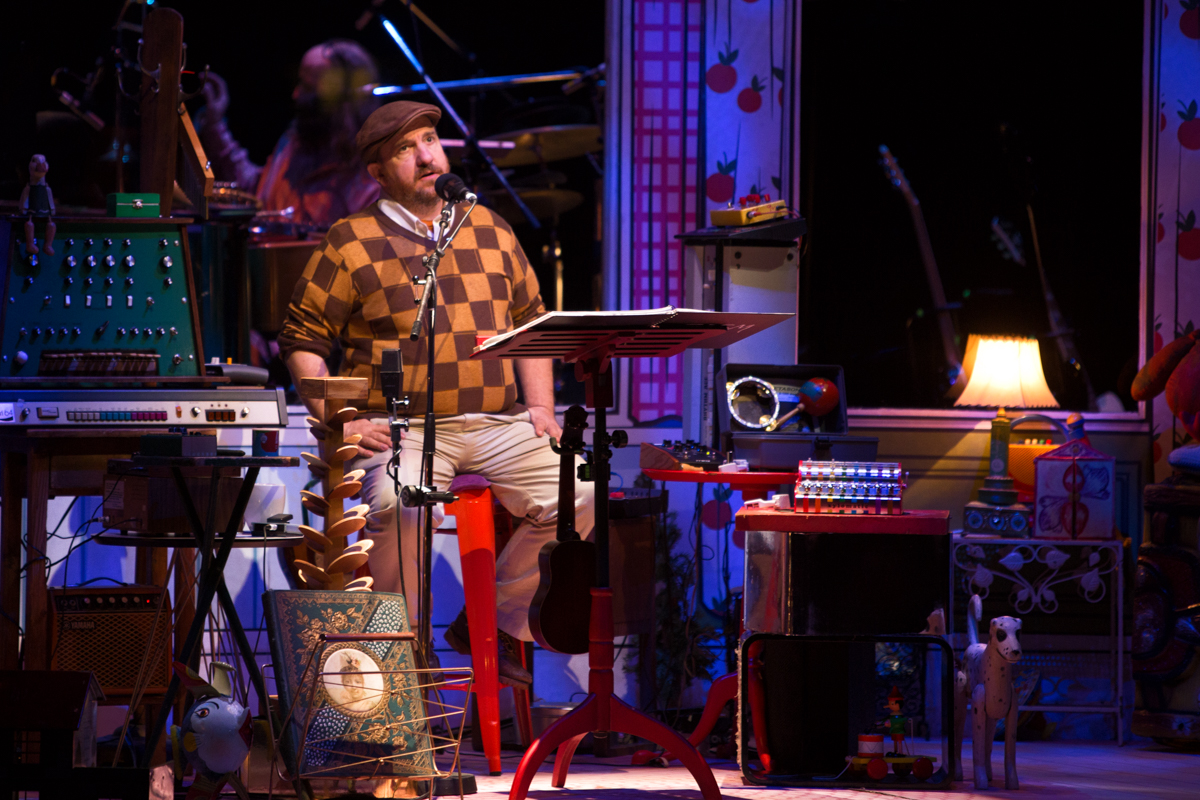 Strap in for the long haul as Getintothis‘ David Hall guides you through the twists and turns of The Magnetic Fields’ epic two-nighter on Merseyside.

Right from the moment the we stepped into the auditorium on night one, the show was a complete sensory assault. A kind of soundproof booth sat in centre stage, which when the band entered housed Merritt alone, with the rest of the musicians arranged around the outside.

The sheer amount of objects onstage perfectly encapsulated the chaos of childhood, of a nursery bursting with toys and distractions. It was also a sign of the times too, with the outdated looking objet d’art connoting the era Merritt was born into. Also for this chronological exploration, it was where we began, with 66 Wonder Where I’m From. The band arrived on stage without a fuss, Merritt‘s ukelele joined by buoyant bass amid the myriad of objects, instruments, and objects used as instruments including saws and toys.

Visuals played a key role in the performance of 50 Song Memoir, with animations and video pieces accompanying each song. A lush Chinese calendar of karmic visions therefore lit up the screen during 67 Come Back as a Cockroach, following the newsreel style of the opener.

An astonishing array of visuals accompanied each tracks, next a display in the style of a stop motion cut-out for the excellent 68 A Cat Called Dionysus, but at times were reined in, forcing the audience to focus on the band when the mood grew sombre, as for 70 They’re Killing Children Over There.

Onstage, the style was no less striking, providing a rounded experience for the audience. The were-they-weren’t-they (they definitely were) spoken word segues Merritt delivered between numbers were diverting and witty, only adding to the arty chamber pop that followed in 69 Judy Garland.

Merritt‘s gestures and askance looks onstage also really brought some of the lyrics to life, like on the blackly comic 77 Life Ain’t All Bad, playing off his deeply deadpan delivery. Not everything solely relied on him however, with 79 Rock ‘n’ Roll Will Ruin Your Life for example conjuring a recognisable riff that didn’t on Merritt‘s lyrical eccentricities and vocal melodies to stick in the mind.

Criticisms from night one were few, but there was a definite lull towards the end that it took several songs to rock out of. It exposed one of the flaws with the formatting of the double-night gig, with an inevitable lull towards the album’s midsection that the flat-feeling 80 London By Jetpack with its mismatched visuals felt unable to do.

There were also some undeniably wanky moments, like around the new wave themed section of the performance centred about 84 Danceteria!, when an honest-to-god circular saw was suddenly wielded onstage.

It mostly tread the line as genuine however, with some almost Dadaist, Beatles-ish visuals winding up into night one closer, the retro videogame shtick of 90 Dreaming In Tetris. Merritt wound up the performance dropping marbles down some sort of xylophone percussion, with the balls falling down in a spiral and striking notes to create a cascading arpeggio. It was one of the outstanding moments of the night, and brought deserved applause as the metaphorical curtain fell.

Musicians in the Movies – Top 10

Suitably refreshed, we returned twenty-two hours later for round two to the biggest surprise yet; the lack of a surprise. The childlike set from night one, that looked certain to be transformed in the meantime hadn’t changed. It would have been a nice touch if the decor had changed, or perhaps the mise en scene updated to a more modern style perhaps.

Nevertheless, it must have been a weird start for anybody who hadn’t been last night, when Merritt came out and played and sang the clanging 91 The Day I Finally… on what can only be described as a stick with percussion instruments screwed to it. Whilst that sort of made sense in context, in isolation it came off as a bit mad. On 50 Song Memoir, that’s a brief midway segue, and was never really designed as an opener, let’s not forget.

Which brings us back to the overall impressiveness of The Magnetic Fields‘ undertaking on both their new album and their dual-night stint at the Phil. The record is, and the performance really was, a singular piece of work; there are no leitmotifs or codas to fall back on, just a half century of songs with wire-thin running themes holding it all together. 92 Weird Diseases is a case in point; dark, and nothing quite like anything before or after it in the collection of songs.

Overall however, the second night started less strongly than the first. The sound seemed muddied, with Merritt‘s biting wit not quite being conveyed quite so effectively, layers of instrumentation smothering his voice at times rather than allowing it to ride aloft. Merritt himself also seemed distracted, less engaged with the performance, but perhaps that’s because the second night dealt with more troubled territory thematically than the first.

The mid album lull also definitely spilled over into concert on night two, with 94 Haven’t Got A Penny failing to scale heights hit elsewhere. It just didn’t seem as vital as the first night – as if all the tricks and secrets had been revealed already, and there was little else new to show the audience.

When the highlights did come however, buried deep in the 50 Song Memoir tracklist, they were truly special. 98 Lovers Lies was heartrending, and Merritt‘s vocal performance of 99 Fathers In The Clouds stood up there with some of the best deliveries he offered on either night.

The fragile heart of 50 Song Memoir was really exposed on these tracks and 00 Ghosts of the Marathon Dancers, but there was one more twist in the tale, beginning with the jaw-dropping 01 Have You Seen It in the Snow?. Something of a love letter to Merritt‘s adopted home of New York City became the running theme.

01 Have You Seen It in the Snow? would frankly be the pinnacle of most songwriters careers. It would truly be a Broadway showstopper in another life, but here it’s a snapshot, barely a diversion, and was followed by
02 Be True to Your Bar, almost like a musical dedication to New York bars and cafes.

As night two and indeed the whole performance built to a close – following something of a slow start following the interval – it became possible to make sense of the whole performance. Exemplified by the faux surf pop irony of 08 Surfin’, all of Merritt‘s narratives lead his audience down wrong tracks, before delivering unexpected punchline. This was also made clear by 10 20,000 Leagues Under the Sea‘s lurch from acoustica into to full-on Pet Sounds bombast.

Consciously or unconsciously, the songs took on more and more gravity as they went along, culminating with a further celebrations of Merritt‘s locale on 12 You Can Never Go Back to New York, before the crushingly immense 14 I Wish I Had Pictures. A lament for lost photos was transformed on the Philharmonic stage to sound like a wish to regain lost years, before another unexpected punchline in the kooky light relief of 15 Somebody’s Fetish to end.

What a marathon and what an event then. By virtue of its immense pomposity and pretentiousness – there are few performers who would consider even attempting this format, let alone pull it off with panache – it’s an intellectual type of music that invites the sort of sniffy criticism that Merritt himself often rails against in his work.

Certainly it was all of those things – immense, pompous and pretentious – but there was also a great deal of humour, a lightness of touch that meant a pop melody was never more than just shy of the crowd’s grasp, and the band impressively barely put a foot wrong across two nights. That didn’t stop the Phil being sparsely populated however, with many gig-goers obviously deciding this was an impenetrable proposition.

“Autobiography might not necessarily be truth,” Stephin Merritt told the crowd at the very outset of night one. That seems a pretty appropriate metaphor to end on. Perhaps a 50 Song Memoir sounds like a tough ask. Sitting in the Philharmonic Hall for two nights, it felt like a breeze. 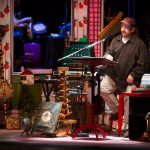 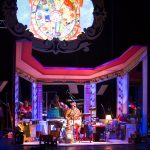 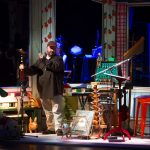 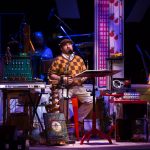 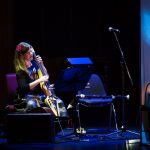 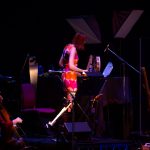 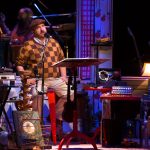 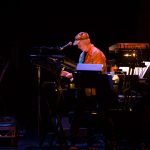