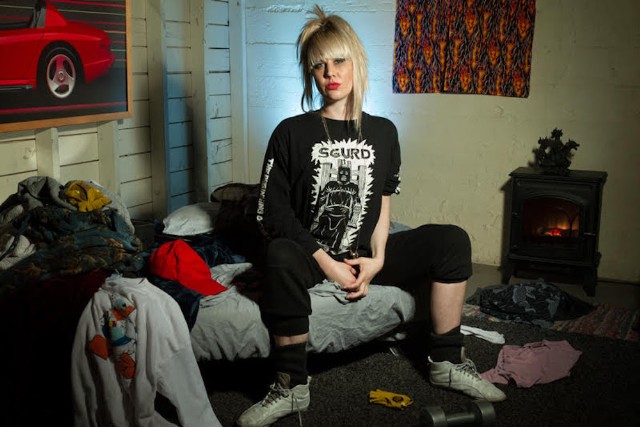 EMA played the Soup Kitchen and Getintothis’ Joe Ray Woodhouse ventured down to find out just what it’s like to be an exile in the outer ring.

EMA, short for Erika M. Anderson rather than Education Maintenance Allowance, has brought her take on America to Manchester’s Soup Kitchen, and whilst the venue might smell a little mouldy, her views freshly replicate the current state of the country via song, and sometimes with an electric violin. More bands should have one of those.

The show began with support act Dubais setting the mood; soft minimalist beats, sketches of thoughts and, of course, on stage dancing to it all. A start which wouldn’t have felt so out of place as a Twin Peaks ‘Bang Bang Bar’ end credits show. But here Dubais was the beginning of it all. It ended with someone insisting Morrissey’s racist views were simply anti-establishment, after Dubais made note not to cover the guy whilst in Manchester. So it goes.

The music of EMA is fairly industrial, with droning synths backing her singing, Patti-esque monologues and occasional screams of wanting to destroy. It sounds so crisp, each word impossible to miss, which seems like a live gig rarity, so props to the sound balance, or perhaps props to knowing the collection of songs a little too well.

The art of EMA is in how she takes the problems of America and distils them into something to dance to, or perhaps sway to. Aryan Nation is the cumulation of the emotions for her country, with other tracks adding extra layers to the spiralling descent of America, though was it ever rising?

Catch up on our latest gig reviews here

If the songs aren’t political they feel personal, with Marked feeling suitably haunting with the line ‘I wish that every time he touched me left a mark‘. There are plenty of angles on the outer ring with EMA, none of them superfluous. The fact such topics and shifts work seamlessly together with the music is testament to EMA’s vision and aesthetics, because, you know, it’s so easy to ham-fist the two.

The encore was handled a little differently, with EMA taking to the stage, her drummer and multi-instrumentalist standing to the side to let her play out two songs solo, songs which felt so bare, so raw, so shiver inducing, in sound and lyrical content. ‘Teenage Deformed‘ was even a Manchester exclusive, a trial run so complete and so whole. Which sums it all up, really. Excellent Music Always.