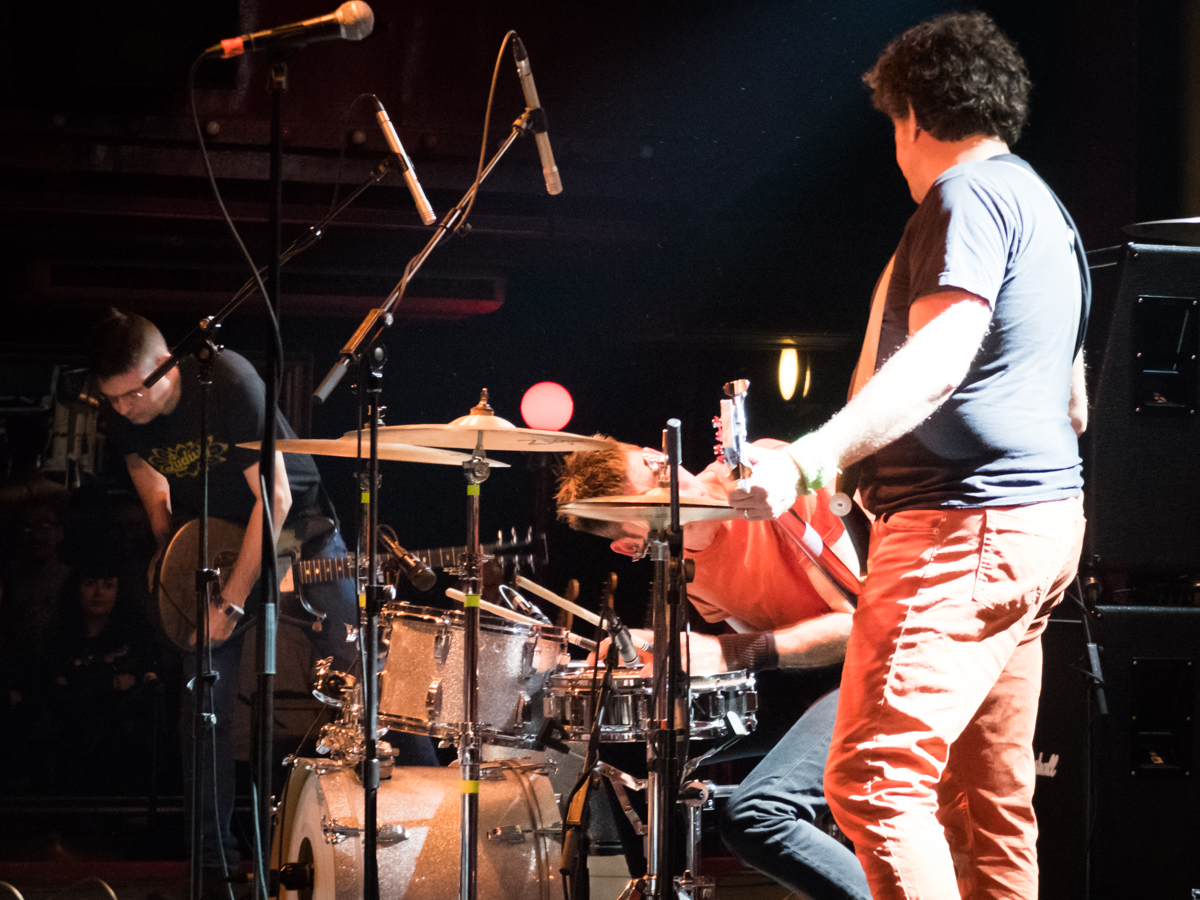 Shellac roll into Manchester not with a free-form jazz conceptual album, Getintothis’ Matthew Eland reveals in their dependable strength and stability.

In a time of upheaval and doubt, it’s a relief that 2017 can at least guarantee us a strong and stable Shellac.

The quality of the minimalist rock trio’s output over the past 25 years has been remarkably consistent – despite lengthy gaps between releases – and the same can be said about their approach to instrumentation and composition.

We can assume with about 99.9% certainty that they won’t be releasing any free-form jazz vibraphone concept albums at any point within the next ten years.

You know pretty much what to expect at a Shellac gig: ringing copper plectrums; lean, muscular rhythms; Steve Albini pretending to be a plane.

Over a period of time that might necessitate a number of reinventions in other, less self-assured acts, it’s admirable how the group has stuck to their winning formula.

The fun, and the reason for following a relatively straightforward band well into their third decade, comes from how they fiddle with that formula.

It helps that they’ve chosen, in Glasgow’s Iona Fortune, an artist whose sound is so markedly different to theirs. Like Shellac, it’s a simple set-up – just keyboard and laptop in this case – but here the similarities end.

Her synth basslines are glacial and arrhythmic and threaten to dislodge not only every light fixture within a quarter-mile radius but also the contents of every bowel in the room.

It really is a powerful and disorientating low end, and it’s overlaid with sampled Chinese zither lines that ping and multiply with perfect clarity above the devastating bass.

The compositions are from her first album, Tao of I, the first in a series of eight explorations of the “symbols of the I Ching”, and they occupy thematic space somewhere on a scale between the work of Fuck Buttons and Stars of the Lid.

The downside to Iona Fortune is that they make Shellac – who begin after their customary tuning session, backs to the audience – seem quiet, and it takes about three songs for them to dispel this impression.

After this though, it’s plain sailing. Steve Albini lurches around the stage as if his vintage Travis Bean guitar has just gained sentience during an earthquake.

Todd Trainer sends bursts of aerosolised sweat into the glare of a stage light with each strike of his crash. Bob Weston is challenged to do the splits during the Q&A and gets stuck between the amps running back onstage after the Steady as She Goes drum solo.

New life is breathed into familiar songs. Prayer to God ends with Albini explaining that his murderous requests should be met because he never requests divine intervention, except for when he loses his keys and for that “thing with the cops the other day”.

Wingwalker is split with an extended spoken word section against almost-complete audience silence, broken only by the sound of someone in the middle of the crowd falling over.

The End of Radio is supplemented with lines from Joy Division’s Transmission, The Sweet’s Ballroom Blitz, and with the continuing adventures of “Snare drum”, who will take you “back to his hotel room” to give you drugs (and who calls cocaine “blow” because “it saves time”).

Instead of the usual drum grab that customarily ends Shellac sets (leaving Todd Trainer with only the aforementioned lascivious snare), Albini and Trainer simply stop playing and begin to pack away their equipment, leaving Weston to continue with the End of Radio bassline.

He, and most of the audience, are left guessing as to whether this is some kind of performance-art mischief until it becomes clear that it really is just the end of the show.

It’s a typically no-nonsense end from the single-minded and self-sufficient three-piece.

The only downside is that it’ll be another long wait for a new album – by their own admission, they’ll need to write “a lot more” songs before one can happen – but would you have it any other way?