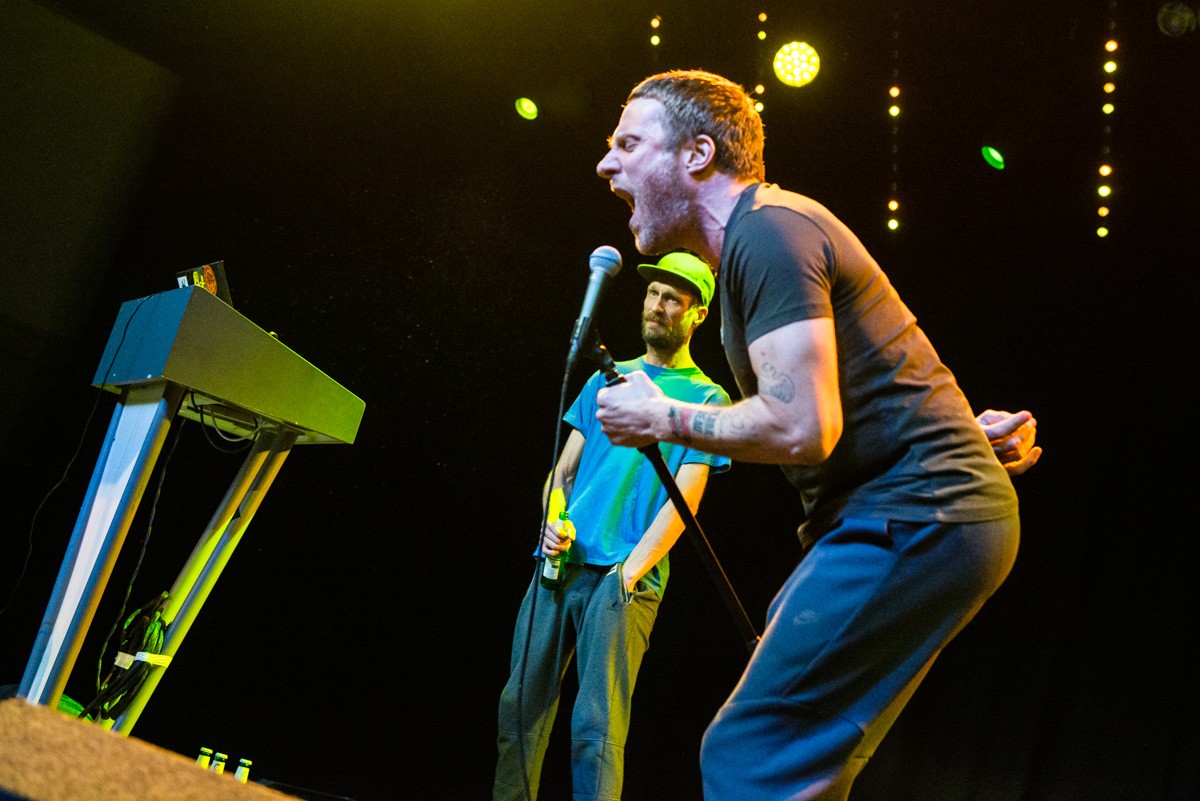 As Sleaford Mods play a barnstorming gig in Lincoln, Getintothis’ Simon Kirk looks back at their story so far and explains why they are the most important band in Britain.

Lincolnshire. Although they no longer reside in the county, ultimately it’s where the Sleaford Mods were conceived.

Lincoln, Grantham, Boston, Sleaford, Grimsby, Skegness . The places which forge the framework of the Sleaford Mods remit. Jason Williamson: the architect of razor-sharp rhetoric and pure satirical genius. Andrew Fearn: crate digger extraordinaire and purveyor of beats. Minimal yet undoubtedly pertinent. The vital organs pumping lifeblood into this existence. The left hand talking to the right.

Nine-to-fivers, semi-retired chain smoking boozer dwellers, sniff heads, sports fans. As demographics go, the ’Mods cast a wide net. Their music stirs up something which festers inside the collective stomach. While staunchly claiming they aren’t the voice of the working class, it’s fair to say that they could well be right. After all, what is working class these days?

As well as assuaging the wide array of creatures noted above, it wouldn’t be disingenuous to suggest that they are the voice for the voiceless. Invisible Britain.

Those aforementioned towns in Lincolnshire, not to mention the surrounding towns in rival counties which are also victims of post-industrial decay; Rotherham, Scunthorpe, Doncaster. Towns which now pose as cannon fodder for the inhabitants of elite inner-city London who chortle and denigrate whether it be blatant or through the subconscious. And that’s not even touching upon the poverty which is rife in Britain’s major cities.

Alongside Nottingham – the place where Sleaford Mods now call home –  there’s Bristol, Liverpool, Manchester, Birmingham, Leicester, Leeds, Hull, et al. Isolationism where geographically, socially and economically, those living in these areas are simply forgotten by media both locally and nationally.

Sleaford Mods’ music is the vehicle for this groundswell of fury felt by so many, kicking against the scourge of neo-liberal capitalism. True pillars for the underclass, fuelling the fire for the marginalised, beleaguered, hopeless.

Punk never died. It just had a bit of kip. Too much flat ale and shitty drugs. Sleaford Mods arrived and persisted with their art. I’m sure they experienced the whole “this is bollocks” rhetoric shouted at them from the off, but they persisted.

Through the soul-destroying rigours of nine-to-five employment, they damn well persisted and after releasing several albums from 2007 to 2012 (most notably Wank), slowly but surely they prodded the dead weight of punk with their follow-up, Austerity Dogs. Punk yawned, scratched its nether regions and farted.

It soon stirred when the ’Mods served up a plate of raw delight akin to a greyhound’s dinner in Divide and Exit. When Key Markets arrived a year later in 2015, punk began to shake. Now there’s English Tapas and inevitably punk is floored.

More dark humour thanks to the malaise of the current state of affairs, including Britain’s divorce from the European Union which becomes more prevalent by the day. Although there are referential undercurrents of pure fury dotted throughout English Tapas, it’s not a Brexit album, per se. It’s a Sleaford Mods album and an important piece to accompany their already potent arsenal.

Trump, Brexit and the looming threat of fascism

While irrefutably on point from a political stance, it’s Williamson’s views on the mundane day-to-day that resonates during English Tapas. Cheap fame coursing through the veins of mass culture who utilise social media to the point where reality is watered down to a detestable form of fiction. Williamson has had his finger on the pulse with these deceptions for years and the lens from which he views the world becomes sharper with each Sleaford Mods opus.

As far as music post-2000 is concerned, Sleaford Mods are a band on an unprecedented run of form. There’s a cat’s whisker in defining which of their last three albums is their finest.

With that question, when was the last time you garnered the response from someone that equates to “it changes every week”? Not for a good while, we’d bet. So much so that the general consensus among most tune hounds these days rests upon favourite albums as opposed to favourite artists.

While a plausible endpoint in the digestion of sonic desires, there’s still nothing better than following an artist’s output with magnification. Enjoying the highs and gritting the teeth through the lows. A bit like following your football team, although like music, this aspect is also becoming a mindless “everything now” proposition thanks to the insidious rise of narcissism. Sleaford Mods are one of the few artists that could shift this paradigm and that’s simply on the back of producing quality music.

So here we are. Lincolnshire. Lincoln. The Engine Shed.

The perfect place to witness this behemoth live for the first time. Yes, I am late to this party. Very late. Having recently emigrated to the United Kingdom from Australia, I have merely heard this all unfurl from afar.

The only visual snapshot of this freight train being Christine Franz’s excellent award- winning documentary, Bunch of Kunst. It reveals the whole story by and large. Sleaford Mods doing it their own way. A commodity in this day and age that is as rare as rocking horse shit.

Not since the Australian cow punk days has there been so much spit-and-sawdust spirit. The days of the Cosmic Psychos rolling around in the dirt, posing for photos with Massey Ferguson tractors as backdrops. Or the Beasts Of Bourbon making The Axeman’s Jazz with the aid twenty bucks, Victoria Bitter, and cheap cocaine. Granted, parallel universes sonically, but very much aligned in attitude. Wrecking balls rumbling towards the so-called status quo. The industry.

The first ’Mod I see is Fearn. He ambles out onstage, setting up his laptop and giving the thumbs up to those in the front row. There’s a glint in his eye and a warm appreciative how-the-fuck-did-we-get-here kind of grin. It’s obvious from his reaction that never in a million years did he envisage the legs that this project has grown. He disappears backstage, probably to grab another bottle of beer from the rider.

Shortly after he returns with his partner in crime, Williamson, and it’s game on. Williamson mockingly prances out onstage like a wannabe Freddy Mercury in a Queen tribute act playing down at the local pub on Saturday night. He’s wearing Nike tracky bottoms and brown brogues. Classic niche in the who-gives-a-fuck department. His beer garden alehouse etched tattoos are on show for all to observe. Like his music, even Williamson’s tattoos have a uniqueness about them.

I Feel So Wrong kicks off proceedings. The most self-conscious number on ’Tapas and an interesting choice to start. The hilarious cut that is Army Nights follows and is delivered admirably as Williamson moves around onstage spitting venom in between habitual head twitches and lurid gestures to accompany his words. There’s a whiff of Billy Big Bollocks about him, strutting around the stage, chest out like a prize pigeon. It’s merely all a part of the act in a self-deprecating kind of way.

Fearn meanwhile dances around like he’s in the pub holding an ear to something that piques his interest on the jukebox, or perhaps that very League Two-esque Queen tribute act. He spills most of his Peroni whilst in this momentary euphoria.

From start to finish, the vibe never plateaus. The black comedy of Drayton Manor, the hip-hop undercurrent of Carlton Touts. Taspas’ finest moment, Dull is delivered with more fire and brimstone reminiscent of the Divide and Exit days (admittedly, not too long ago, but this train moves fast). ‘We don’t sell out souls anymore, give it away for free!’ spits Williamson. Perhaps his most poignant message committed to tape yet.

After the fantastic overt tirade against wealth extracting cunt, Philip Green, (B.H.S), the ’Mods briefly vacate the stage only to return, concluding the night with the crowd favourite one-two combo of  Jobseeker and Tied Up In Nottz. A no-nonsense stage exit follows, with the dwellers at the front of stage picking up their jaws from the floor in a state of rapture.

The night is over and expectations are met, if not exceeded. This isn’t standing on the shoulders of giants. This project is too brazen for that. Sleaford Mods simply are the giants. And no one’s standing on these fucking shoulders. No one. You can’t replicate this.

That’s what makes it so era-defining. Affluent Shoreditch fuckwittery this is not. It’s unpretentious. It’s punk. It’s soul. It’s real. That’s why they are the most important band this country has seen in years.