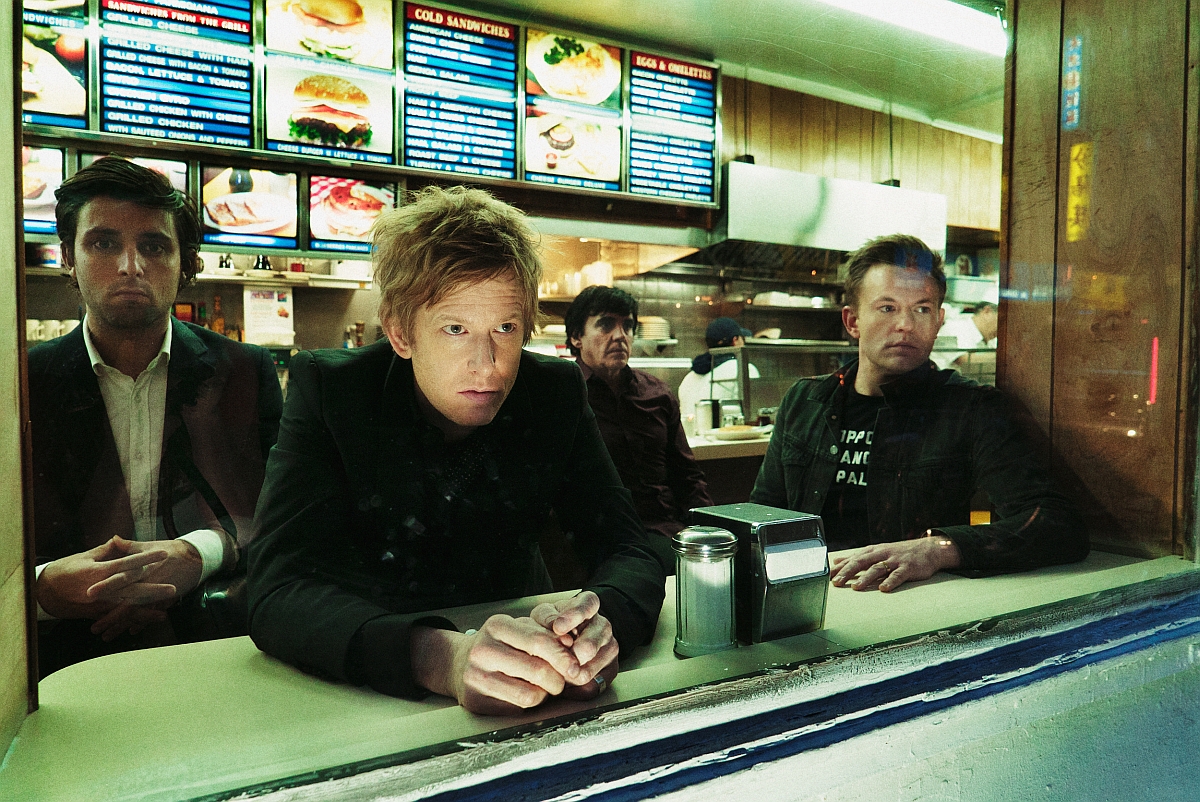 Spoon are due to play Liverpool’s Art’s Club and Getintothis’ Peter Goodbody had the chance to sit down for a transatlantic chat with bass player Rob Pope ahead of the gig.

American rockers Spoon hit Liverpool on November 7 and in advance of the gig we had the opportunity to have a chinwag with their bass player, Rob Pope. Here’s how it went.

Getintothis: Where are you at the moment?
RP: I’m in Worcester, Mass, I’m going to be boarding a plane to Brussels, Belgium later today

Getintothis: You’re playing Brussels tomorrow, yeah
RP: You got it. I’m kind of pushing my luck here. A bunch of the other guys flew over yesterday, but luckily, that means I get to talk to you today.

Getintothis: Ha! Thanks. You seem to have been on the road for a lot of this year, criss crossing the Atlantic.
RP: We’ve been working hard this year. Harder than the band’s ever worked.

Getintothis: Any high points?
RP: All of it. It seems like, particularly in Europe, all our UK shows have been much better than in years past. Even in Central Europe, our German shows were really great. So that’s been really good. I love touring in Europe. It’s kind of been a bit of a struggle for the band in the past, but it seems like things are coming around and we’re spending a lot more time over there. Which is great.

Getintothis: Do you have any idea why that might be? Why things are better in Europe?
RP: Since we’ve been on Matador for this record [new album Hot Thoughts], the label is set up internationally so there was a single release date. We didn’t have an American label and a European label and a Japanese label. It wasn’t split up into territories so we were able to kind of work together as a team and everybody knows each other. I think just the way the record came out and the reception to it worked better for us. And when we were over there we did a show in Holland, we did a little tiny show in London at the 100 Club. We spent a lot of time over there before the record came out. So it seems like that helped us out quite a bit.

Getintothis: Any low points you’re willing to share?
RP: Oh, God. Ha! Nothing particular, you know we’ve been so busy, there’s been certain times when it can really start to feel like Groundhog Day, where you’re just doing the same thing over and over. But I mean, fuck, we all have the best job in the world. It’s not really a job – we’re all getting to do what we really care about. Sometimes the buses are not quite as nice as we’d like them to be and they leak on us, they don’t smell very great, but that’s the price you pay for living in close quarters with 12 other people.

Getintothis: If I do a google search on the band I get a description of an indie rock band or an indie pop band or even an art rock band. Do you identify with any of those labels?
RP: Sure, I mean I like independent music, I like art. I like pop, but I’m not going to tell anybody what to call our music. But, yeah, I identify with those terms.

Getintothis: What kind of music are you listening to at the moment?
RP: Let’s see. Earlier today I was driving around listening to some 90s American bands, like Unwound and The Jesus Lizard. And, we’ve been touring a lot with a really great American band called White Reaper – not sure if you’ve heard of them, but you should. They’re great, they’re young kids from Louisville, Kentucky and I really love their latest record. That’s been the stuff I’ve been listening to recently.

Getintothis: Do you think any one band in particular influences your sound?
RP: No, I think we go through phases, you know. This last record I think was really kind of because of what was going on. There was a lot of Bowie and a lot of Prince floating around. With the deaths of those guys, all of us went through our phases of listening to and spending a lot of time with those records. But there’s not really one band that influences Spoon. A band that we always go back to – and I know it’s a big one for Britt [Daniel] – I don’t know if it really influences the band, both of us really love The Kinks – I’ve spent a lot of time with those records.

Boneface, Queens of the Stone Age and an illustrated war of attrition

Getintothis: The name of your band is obviously a reference to Can.
RP: Yes. Indeed.

Getintothis: How do you fit in with the legacy of a band that was probably at their greatest 50 years ago?
RP: Ha! I dunno. It’ll be interesting to see how history treats us. We’ve certainly been received really well in the press and the critics seem to like us and I think that fared pretty well for a band like Can also. You know, they were a tastemakers’ band. So, yeah, it’ll be interesting to see what kind of legacy we leave.

Getintothis: Sure, I was going to ask you about that because the new album has had lots of really good, 5 star reviews. Do you think that translates into actual record sales and popular appeal?
RP: No. I think any record label or anyone in the music industry would tell you that doesn’t have anything to do with it. Not immediately, anyway. You know I think those are records that become classics and records that sell well over time. They might be untimely records, you know. They might need to be discovered by somebody 3 or 4 years later, or 10 or 15 years later. We don’t read a lot of our own reviews. People tell us nice things, on occasion, which is nice and we believe what we want to believe and then hopefully people buy the record and come out to see us play.

Getintothis: The band has been in existence since 1993 in one form or another. How do you manage to keep it going for 24 years?
RP: Well, I’ve been in the band for 11 of those years. I joined the band in 2006. There had been a pretty big revolving cast of characters before I joined the band. Britt and Jim [Eno] have been part of it for a very long time. I think we feel like we’re doing a good job at it. We put a tonne of work into it and we take it really seriously and luckily it’s been really rewarding.

Getintothis: How many more years do you think you can carry on?
RP: I don’t know. That’s a good question. It seems at this point we’re all lifers at it. So, we’re all gonna die on stage apparently.

Getintothis: I saw you play in Manchester in June and you had comedian Adam Buxton as warm up. What was the thinking behind that?
RP: You know, he’s been a friend of ours for 10 years or so and he’s just a great ,hilarious guy. And when we were talking about bands that were going to open up for us on that tour, his name came up and it was just like “Maybe we should ask Adam”. And then we thought about it [and decided to do that because]it would make it just a bit more memorable than just going to a normal rock show and seeing two bands play. It seemed like an interesting, cool thing to do, and it was also just a chance for us to spend more time with Adam.

Getintothis: Is he the warm up for any more gigs coming up?
RP: I don’t think so. You know we’ve talked about doing more of that because it worked so well. Like trying to find a comedian, even in America, to open up shows. It changes the dynamic of the audience. It’s great to have an audience that has been laughing for 45 minutes then we come out and do our very serious, brooding, big rock show. It just makes it a little more memorable and a different show.

Getintothis: Anything about Liverpool you’re looking forward to?
RP: You know, I was thinking about that. I haven’t been to Liverpool in so long. Do you even know when was the last time Spoon played in Liverpool? What do you think we should be doing? I mean I’ve been there and I’ve played at the Cavern Club and did a lot of the Beatles stuff. What sort of cool stuff do we need to be doing?

Getintothis: There are lots of good independent bars and restaurants now in Liverpool, especially around the Arts Club where you’re playing.
RP: Nice. If you can have a think and pass onto our publicist just a short list of cool bars and restaurants, that would be very appreciated.

Getintothis: Will do that thing – thanks for your time talking to us.
RP: Cheers. You take care.