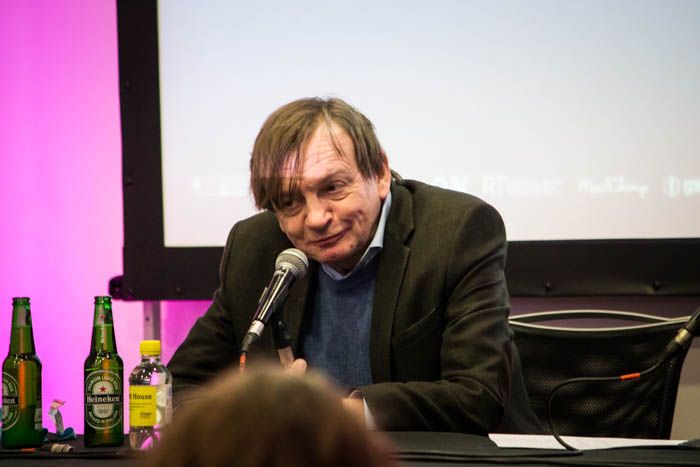 Friends, brothers and sisters, it is indeed a dark time.

The Hip Priest himself – erroneously self-diagnosed as “not appreciated” – has passed and will be finally laid to rest. Indeed, the renegade maverick breathed his last on Wednesday morning and the world is a less strange, less intelligent and altogether weirder place.

In a world gone mad, the measured, cynical and at times surreal barbs that comprised his intellectual oeuvre represented to many the eye of the storm; an anchor in the maelstrom of our collective consciousness.

Smith’s public image waxed and waned like the moon and the tides. Seen at once as unpredictable, amusing, aggressive, wildly intelligent, impatient and just plain goddamn insane, the man who contrived against all odds – usually his own – to drag himself and The Fall through countless destructive incidents and modes leaves a phalanx of grieving fans rifling through dusty record sleeves and faded t-shirts.

“Fall fans are the salt of the Earth, they don’t come up and bother you in the supermarket” recanted Smith at some point in the 1980s. Art imitates life, we all imitate one another.

Or at least we try. One descriptor correctly applied to Smith was “inimitable”, and how. And so, for your consideration, here are some of Mark E. Smith’s most, erm, unconventional moments:

1. Ahead of an appearance on Later With Jools Holland in 2005 to promote the Fall Heads Roll LP, Smith became the only artist in the history of the show to have a clause in his contract inserted to state that Jools will not play boogie-woogie piano over any of his songs. The Fall went on to play Blindness, a latter-day monolith of a song, and Smith‘s own tuneless keyboard wanderings were still probably better than anything ol’ Jools could have bashed out.

2.  An encounter with Damon Gough – aka Badly Drawn Boy – in the mid-90s was swiftly inducted into the annals of legend. Upon seeing Smith leaving a hotel in Manchester, a little worse for wear, Gough slowed his car down to speak with him. Mistaking, or just simply assuming, Gough for a taxi driver, Smith hopped in and demanded to be taken home. Gough, perplexed but amused, did so.

Later, it transpired Smith had not just left a leather jacket in the back seat, but also a set of false teeth. Gough hung them from his rear view mirror for a long time thereafter. When quizzed about the story, Smith lamented the loss of the jacket but claimed Gough “can keep it, the fat little get.”

Gough and The Fall went on to collaborate on the enigmatic Calendar.

3. In 1997 Smith was chosen as the recipient of the NME’s Godlike Genius Award. In true Smith fashion, his attendance and acceptance of the award sparked confusion.

Claiming he was tricked into appearing by then-bandmate and partner Julia Nagle, Smith went on to interrupt his own introduction to the stage from Eddie Izzard, claimed “it’s not like you to be funny, Eddie” before giving a closed, rambling speech in which he stated the award “belongs to those who can read the NME from cover to cover every week”. To a chorus of laughs and boos, he flicked the audience a v-sign before leaving the stage without his trophy.

The Fall – the Manchester icons’ entire back catalogue rated and ranked

4. Riding high on the success of the Theme From Sparta F.C. single, Smith was invited onto Football Focus to read the day’s full-time results.

A long-time dyed-in-the-wool Manchester City supporter, it may well have been the realisation of a small ambition to sit and recount the action but, predictably, things got a little weird…

Choosing to totally abandon the tried and tested format of reading from the autocue and actually saying the words that were on there, Smith began throwing in his own non-sequiturs and surreal comments. It left many viewers and those in the studio absolutely baffled.

After inventing ‘Southampton Town’, we learned that the game between Spurs and West Ham had degenerated into “Tottenham Hotspur postponed, West Ham 1H”.

Somehow undeterred by all of this, host Ray Stubbs interviewed Smith, only to be asked why he has a haircut “worn by murderers in Strangeways”. Carlton Palmer, sat on the sofa next to Stubbs, looked suitably bemused.

Of course, it wasn’t just any cameo; he played Jesus…and he may be the only version of the Son Of God to mutter the phrase “he’s takin’ the fuckin’ piss”.

To finish, here are a few short blasts of the best of the man from Prestwich:

…and on a personal note, from the bottom of my heart, I’ll miss Mark’s words, The Fall’s music and the inspiration and sense of understanding both have given me for a large portion of my life, and will do forevermore until my own existence is snuffed out.