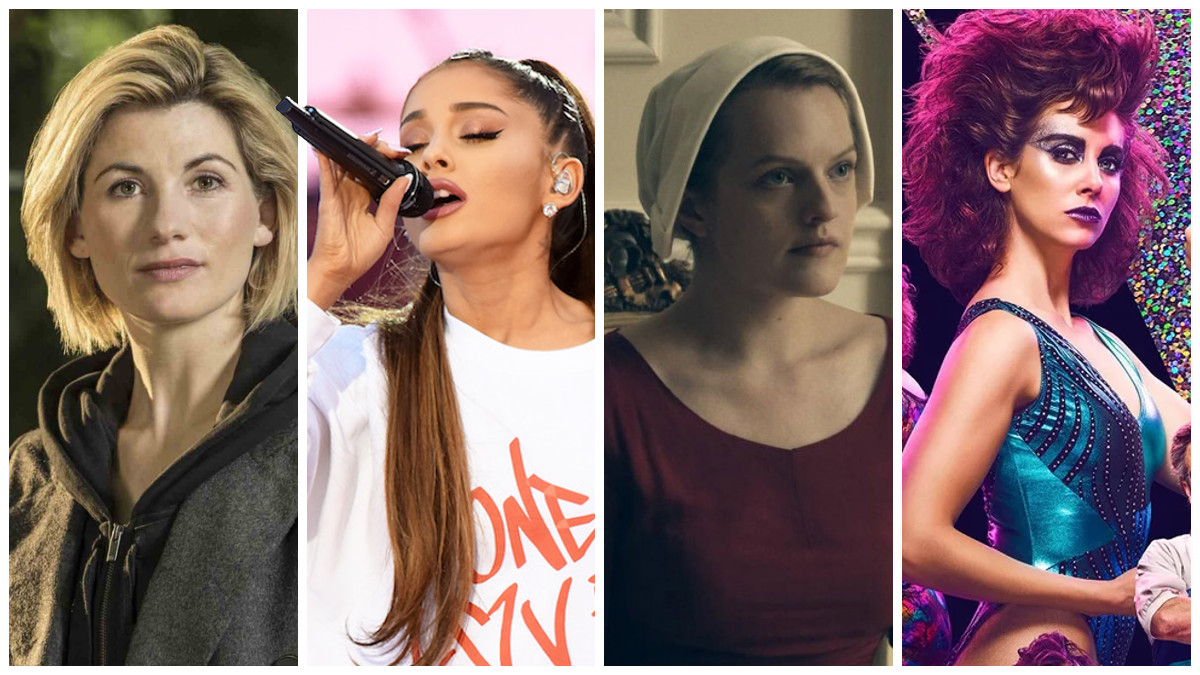 2017-the year for strong women in television

Looking back on 2017, Getintothis’ Nathan Pang picks nine highpoints which shows that TV never lets us down.

While the passing of a new year is in many ways arbitrary, it’s still somewhat of a relief to shrug off the 12 month long Dementor’s kiss in favour of a year of new possibilities, second chances, and political impeachment.

But while the year dragged more than RuPaul, at least we have our old pal TV to keep us company in these turbulent times. TV never let us down. Or at least, when The Walking Dead and Electric Dreams does, there are twelve others popping up like whack-a-mole that will distract us for another 16 hours at a time.

So what did the television of 2017 bring us?

Genre borders are blurring to the degree that Get Out was somehow nominated twice in the Golden Globes as a “comedy or musical”, and award shows simply cannot decide whether Orange is the New Black is a comedy or a drama. But the positive takeaway is that what has been happening is simply, comedies are telling braver stories.

Comedies are dealing with issues of race, sexuality, religion, and mental health (from Atlanta, Black-ish, Master of None, Crazy Ex-Girlfriend, to name but a few) with the emotional depth and interrogation of any quality drama. Not that these weren’t explored in comedy before, but never have they been taken so seriously, in scripts written by the funniest television writers today. Comedy doesn’t come at the expense of representation, but exuding from within.

The crumbling of the ivory tower of Hollywood’s embedded misogynists and predators was a long-overdue sight to behold.

Derailing the careers of powerful men in every corner of showbiz, the good news/bad news situation is hopefully, in the end, the beginning of a healing catharsis. If the potential careers of women and men, children and budding young artists have just a bit more freedom to create art without such harmful boundaries, it’s only a waiting game to see what the upcoming Hollywood hot-shots can create.

In the meantime, 2017 has brought one of the best years for women on television, in recent memory. Firstly, the absurdly and depressingly relevant hit The Handmaid’s Tale won the Best Drama Emmy, with novelist Margaret Attwood’s other, superior series Alias Grace hitting Netflix with a transcendent performance from Sarah Gadon.

The BBC returned to the Shakespearean saga of Suranne Jones as the woman scorned Doctor Foster, with a second series that once again slowly twists its knife into your gut over five gruelling episodes, as she plays a masterful game of chess with that son-of-a-bitch Simon Foster.

The massively underrated war drama Our Girl returned, with Michelle Keegan’s heroic army medic, and Thandie Newton was the one under the skin-peeling investigation in the latest series of Line of Duty.

Amazon Prime has been rolling out endless middling dramas, but they struck gold with Amy Sherman-Palladino’s (Gilmore Girls) The Marvelous Mrs. Maisel. Rachel Brosnahan injects the boldness and exuberance of a post-modern heroine into the 50s housewife of Midge Maisel, by far my favourite TV character of the year. Other than a recurring stint on House of Cards, Brosnahan is yet to be a household name, but it’d be a crime if that weren’t to change soon, particularly as she’s just picked up a Best Actress Golden Globe for the show.

Elsewhere in comedy, Michael Schur (Parks and Recreation, Brooklyn Nine Nine) topped a great number of best of lists with afterlife comedy The Good Place, lead by Kristen Bell, who is wrongly rewarded with a place in a malfunctioning paradise. Though it began last year, the first season popped up on Netflix to little fanfare in September, on the day of which I ploughed through the entire series in one sitting, then promptly rewatched the entire thing the next day.

Netflix also released the experimental fifth season of Orange is the New Black, Alison Brie and Betty Gilpin wrestled through their issues in GLOW. I could go on, and on. And on.

David Lynch returned with an 18-hour Twin Peaks movie, with all the auteurist strangeness and surreality that went before.

And speaking of bizarre fictional towns, The League of Gentlemen came back with a 20th anniversary return to Royston Vasey, where Mark Gatiss gets his tits out.

And Star Trek came back to television after 12 years, to the conflicted reception of its fans with Discovery. Heck, it even took 2 years for Dan Harmon and Justin Roiland to bring back Rick and Morty, then surprising fans by releasing the first episode as the ultimate reverse-April fools.

Sherlock and Peaky Blinders marked the beginning and end of the year, of BBC’s flagships. Chris Chibnall signed off an outstanding third and final season of Broadchurch. Of course, Netflix has had a banner year with the return of everyone’s favourite show Stranger Things, bringing baby Musketeers, secret sisters, arcade classics and more twists and turns than you can shake an Upside Down vine at. But most importantly: our sweetheart, our gentleman, and the one true superhero of 2017: Bob Newby.

Peter Morgan’s masterful saga continued with the last of Claire Foy and Matt Smith in The Crown, and Better Call Saul just somehow keeps on getting better with a pitch perfect third season. Yes, the heavyweights of television did not disappoint this year save only with the possible exception of The Walking Dead.

Also, Game of Thrones was a thing.

Yes, she deserves a point to herself.

I still get goosebumps watching her reveal video, and it easily marks, by a country mile the most exciting television moment for myself last year, and I’m sure many other nerds. And yet, even a year or two ago, I’d have been very hesitant about the idea of a female Doctor.

I can sympathise with those who still struggle with accepting it. No, it’s not automatically sexist for fans to be apprehensive. It’s a huge change to the show, equalled only by that time William Hartnell was sacrilegiously replaced by the fraud 2nd Doctor Patrick Troughton, and yet that led to the shows next 51 years of adventures.

Strangely, it’s both long overdue, and yet arriving at the perfect time.

It’s controversial, bold, and yet absolutely, utterly necessary for the show. Was “political correctness” involved? Probably a little.

Was the desire for a revolutionary new chapter for this aspirational fairy tale involved? Probably a lot.

Change is essential in Doctor Who, a show that purports to be the progressive lighthouse for British television and culture, so it’s time to put its (limited) money where its mouth is, and roll on what may be the most anticipated series since its return in 2005. Jodie Whittaker may well be the best thing to happen to Doctor Who since that wonderful hack fraud Patrick Troughton. Roll on series 11, she will be brilliant.

Since the 60’s, television has been living room furniture, as central to the home as the sofa. But talking about television as a box in the house, is now a world away from television as a medium. The two definitions have been evolving and distinguishing from each other for decades now.

VCR gave us some control of consumption. DVD and Blu-Ray too, of course. But even streaming is old news now. Netflix and Amazon have not only joined the ranks of the biggest TV networks and channels, but they’ve already lost out to the online competition of Hulu in becoming the first streaming service to win the Best Drama Emmy.

So that’s what’s up with the medium, what about as technology? 4K and curved screens have finally become affordable and realistic for mass market this year. We not only get TV on our devices, but we get YouTube and Netflix on Smart TVs. We can watch shows on the train, the toilet, at work, while sleeping. Just everywhere.

What television in 2017 has been, if anything, is abundant. But has quantity brought quality? Are we still at peak TV? Or has the snow atop the icy mountain peak melted from global warming and we’re submerged, drowning in an overwhelming pool of programming?

There were FAR too many great shows in 2017 for any one person to sit through, and while those FOMO-sufferers will never again find enough hours in the day, at least there is more than enough killer television to bring to our hibernation, as we brace ourselves for whatever fresh hell may await us this year. Escapism has never been more needed.

Faye Dunaway and Warren Beatty’s glorious Oscars blunder will be etched in Hollywood history. But the year had so many other wonderful blunders that, strangely enough, seemed to bring us closer like nothing else can.

Robert Kelly’s adorable children interrupting a Korean affairs news segment, Jeremy Corbyn’s boob high-five and Theresa May’s P45, Prue Leith spoiling the Great British Bake-Off finale on Twitter before it aired, John Barrowman splitting his pants wide open on Celebrity Juice, and almost every other segment on This Morning from Holly Willoughby and Phillip Schofield when they corpse. There were no shortage of wonderful moments of pure delightful happenstance, and the best part: there is always one right around the corner.

This isn’t politics. This is sport. Laughing and criticising politicians is a human pastime we all partake in, but when the man who defies satire and all comprehension walks into the White House with his finger on the big green Tweet button, he may have just become the world’s biggest lightning rod.

Every panel show, every talk show has pretty much put a blanket question of ‘What insane thing has Trump done this week?’ for each episode. SNL made it its mission statement through the year, effectively hiring Alec Baldwin as a full time cast member to tear down Trump every week (We may not get it here, but practically the whole thing is on YouTube every week).

Mental health professions have diagnosed him, scientists have corrected him, and television personalities have done what they do best, trash him. 20 points if you insult his kids too.

All jokes aside, as we reflect on another chaotic year, there were those few saving graces that stood out.

Nothing represented the struggles, the strength, art and generosity than Ariana Grande and the city of Manchester had to offer than the One Love Manchester benefit concert in June. Grande pulled together the most important concert of the year 2 weeks after the suicide bombing at her Manchester Arena show on the 22nd May, killing 22 and injuring over 500.

Broadcasting live around the world, and raising in total over £17 million, it’s nothing short of a miracle and a shining example of the unyielding power music and unity can have for the world. But also, remember that jolly policeman dancing with those kids?