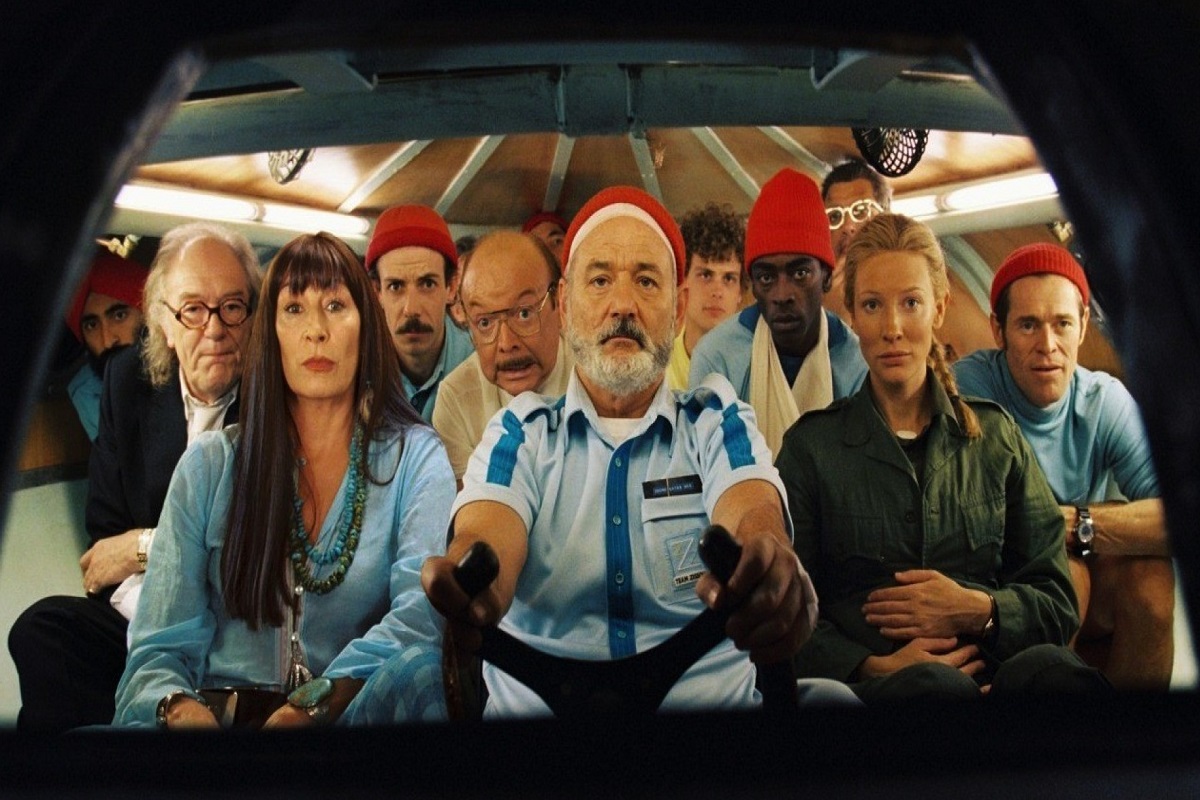 As FACT screens a retrospective of Wes Anderson films in advance of his much-anticipated 9th feature ‘Isle of Dogs’, Getintothis’ Chris Leathley investigates a spectacular filmography.

Wes Anderson is a filmmaker who is at the very peak of his powers.

His last picture, The Grand Budapest Hotel (2014), was his biggest hit to-date, grossing nearly $175 million at the box office and winning a clutch of Academy Awards.

He’s regularly able to attract an enviable array of acting talent to his projects, often for little more than an enigmatic cameo. In fact, you could make a case for Anderson having coaxed career best performances from the likes of Bill Murray, Gene Hackman and Ralph Fiennes (among others).

Yet, he is also a director with a keen eye for fresh talent and has frequently cast unknowns in lead roles (Tony Revolori in The Grand Budapest Hotel or Kara Hayward in Moonrise Kingdom (2012) for example).

Look beyond the performers and you find production designs that are miraculous wonders, resplendent with extravagant symmetries of décor and costumes (all of which can be fully explored in Matt Zoller Seitz’s wonderful books on Anderson).

Delve even deeper still and you find soundtracks that are often as celebrated as the movies themselves, crammed with classics and curios alike and supervised by singular maestros like Mark Mothersbaugh and Alexandre Desplat.

Add to the intoxicating mix the fact that Wes co-writes all of his films’ screenplays, producing waspish dialogue, screwball delights and lyrical melancholy with impressive ease, and you find that you are in the presence of cinematic greatness. Surely, there’s an argument to be made for Wes Anderson as the best living American filmmaker today?

Luckily for all our readers, FACT are screening the complete back catalogue of Wes Anderson films beginning with his lo-fi debut Bottle Rocket (1996) on the February 7. The sheer variety on display in Wes’ unique filmography will delight all generations of filmgoers.

Indeed, the cliché of ‘there’s something for everybody’ really does apply in this case – animated adventure, sea-faring catastrophe, metropolitan drama, coming-of-age nostalgia and quixotic travelogue all reside in Anderson’s cinematic oeuvre. Who could ask for more?

In that vein, we present the 5 Wes Anderson movies that you should make a beeline for over the coming days…

The then little-known Jason Schwartzman plays precocious Max Fischer, a once promising scholarship student who has lapsed into academic slothfulness whilst indulging his mania for extra-curricular activities. In the midst of his scholastic unravelling, he encounters a potential mentor (played by Bill Murray) and an impossible love interest (played by Olivia Williams), both of whom have a profound impact upon the maladjusted Max.

As a movie that deals with adolescent angst, a tired motif in contemporary Hollywood, it stays nimbly clear of predictable or clumsy plot developments.

Instead, the viewer is encouraged to marvel at the gingerly delivered script, bursting with adroit wit and delicious references to classic cinema. This is all wrapped up inside what was to become easily identifiable as Wes Anderson’s idiosyncratic aesthetic style – scene introduction ‘cards’, montage sequences to classic musical riffs, fantasy sets that seem to emerge within a bauble of ‘reality’, a roving camera that seamlessly shifts perspective in gliding movements and so on.

The critics were wowed and so were audiences, even if the film’s box office was necessarily limited by the nature of the movie’s off-kilter approach. This is as good a place as any to start with the mercurial Anderson and his cinematic career.

Expectations were high for Anderson’s follow-up to Rushmore, especially when it became known that actors like Gene Hackman, Anjelica Huston, Danny Glover and Ben Stiller were on-board, alongside Anderson favourites like Bill Murray and the Wilson brothers. Both in terms of budget and ambition, it certainly felt like this was a step into the cinematic major leagues by the auteur.

Fortunately for Anderson, from the opening narration by Alec Baldwin, it became clear that he had achieved something very special with The Royal Tenenbaums. The movie relates the fortunes and recent decline of the Tenenbaums, a family of prodigiously talented but psychologically damaged people. As they each try to figure out a sustainable relationship with their estranged father, they also face up to their own individual crises of personality and existence.

Once again, Anderson curated a wonderful soundtrack that underlines the film’s narrative of melancholy and redemption with considerable aplomb, in addition to the now well-established geometric designs, meticulously arranged colours and acerbic witticisms. The result was an Oscar nomination and a very promising future in Hollywood beckoning.

It seemed that Anderson’s star was now permanently in the ascendant but The Life Aquatic would prove to be an expensive flop that struggled to find an audience. This was, by our reckoning, unjust and misguided.

For one thing, it is a film that boasts Bill Murray in a lead performance coloured by just the right blend of ennui and charismatic potency. For another, this romp through the oceanic explorations of a crew that might be just about past, well, everything, is both hilarious and deeply moving.

The Life Aquatic manages to combine sumptuous sets and effects with a narrative that extends beyond Anderson’s more common, hermetically sealed universes.

The wider cast are a delight with Owen Wilson, Michael Gambon, Jeff Goldblum, Anjelica Huston, Cate Blanchett and Willem Dafoe all delivering comic turns that are gilded with troubled alienation and bizarre disengagement from the reality of their environment.

The running time is perhaps a touch indulgent but the critical mauling given to The Life Aquatic felt like a malicious backlash against the filmmaker, not the film.

Anderson remains a director who has consistently refused to pursue a cinematic realism that was more in keeping with the zeitgeist of the times. Now, The Life Aquatic can be seen as a bold statement of artistic intent, exquisite to look at and emotionally engaging in ways that casual viewings fail to reveal.

Do not miss it.

In many ways, this was a stripped back cinematic foray by Anderson.

The story appears a slight one, of teenage rebellion and familial dysfunction but without the unbridled misanthropy of his other films. Nonetheless, Anderson is able to craft something much more than the sum of its parts.

The film details the chance meeting of two youngsters in a closed community where nobody else provides a meaningful connection.

It is a gentle foray into troubled lives which takes an oblique route to the psychological nub of the matter. It subtly alludes to a world which can feel oppressive, disorientating and frightening but in a manner which is still rich in comic potential. More than anything, the film invites perspective and empathy without the necessity for gritty social realism.

This beguiling quality of Moonrise Kingdom is further due to the tightly controlled cinematography which manages to sustain hypnotic rhythms throughout. Anderson also makes intelligent use of music (especially that of Benjamin Britten) which proffers a complimentary means of understanding the film and Anderson’s filmic intent.

It is a quiet triumph that is all the more stunning for its delicate confidence.

Anderson’s biggest box office success was, at least on first viewing, a fairly superficial bawdy comedy. It boasted a profanity-laden central turn from Ralph Fiennes and plenty of slapstick humour that appeared to be more of a focus than in previous efforts. It was played for belly-laughs and it worked like a dream.

Or so it appeared.

Yet, upon closer inspection, there was something much more telling behind this foray into broader humour. The sensitive pathos of F Murray Abraham as he reflects on the life and times of M Gustave, a legendary concierge in a fin-de-siecle eastern European hotel, implies that this film is about more than comedy. Inspired by the writings (and life) of Stefan Zweig, The Grand Budapest Hotel deals in questions of grief and loss with assured conviction.

For every assuredly funny line, there is a poignant moment of reflection. For every breathtakingly gorgeous interior shot, there’s a penetrating close-up of a protagonist’s face as they try, in vain, to comprehend the inexorable forces of history.

For Anderson to manage both an extraordinarily humorous escapade in conjunction with an evocative portrait of a time and place in painful transition is a testament to his great cinematic skill. A worthy film to end what should be a fantastic season of cinema at FACT.