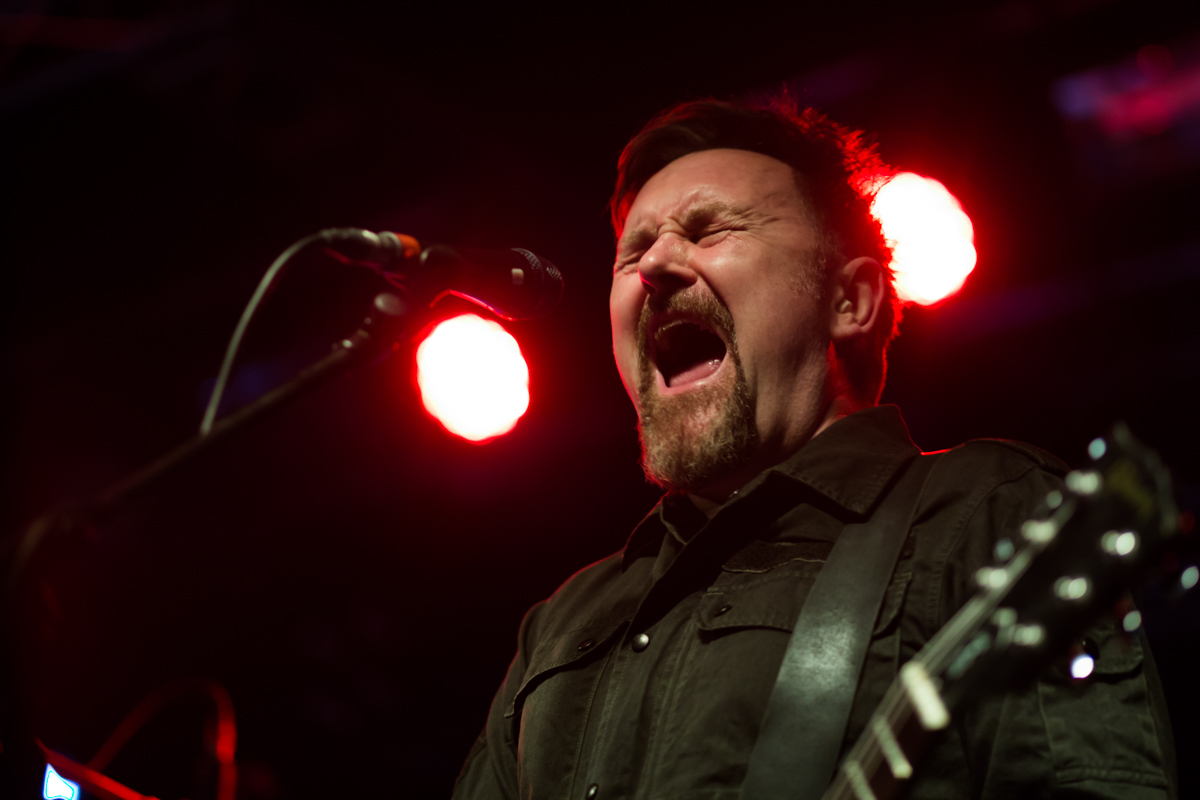 Therapy? are truly veterans and vessels of musical memory for many since they burst on the scene in the 90s and gained notable popularity with their hit album Troublegum.

When they recently went on tour supporting The Stranglers, many argued and even believed it to be a double header than a support-headline dynamic. We could see the reason why when we caught the bill at Liverpool’s O2 Academy .

If you too feel that it wasn’t enough of an offering for Liverpool, the Irish alt-punk outfit will be playing an acoustic set at the inaugural edition of The Feis Liverpool later in the summer. Along with tours and festivals, a whole new album release is also in plans for the year.

It’s clearly a good time to have a chat with the band about things to come. But when you’re talking with people who have been successfully keeping themselves afloat in the most colourful of industries for almost three decades, it’s foolish not to contrast things with a little retrospective and gauge the present and future with past experiences.

So, to do just that, the band generously spared some of their afternoon amidst an extensive and intense ongoing tour. We took the opportunity to find more about what we can expect from the band’s upcoming festival appearance and album while examining some of their story so far.

Getintothis: How’s the tour going with the Stranglers?

Andy Cairns: “It’s been amazing … They’re really one of our favourite bands and we’re getting to see them every night. The gigs are all sold out. It’s really nice and great.”

Andy Cairns: “The electric shows are very live and they’re very powerful and physical.So the people tend to move and dance. There’s a lot more of the shouting and screaming and the band relies on the raw powers of the amplifiers and the sound.

And I think a lot of people relate to that. So, even if they don’t know a band like Therapy?, they can hear us telling the stories and they can see it from another side… Whenever it’s live, it’s just sheer force and whenever it is the acoustic thing, it is more about the stories behind the songs and how the audience reacts to that.”

Getintothis: That sounds interesting because at the festival, there can be people who might not know Therapy?

Andy Cairns: “Yes. And that’s why it will be good for us because we are getting to play for people .. who either will have not heard of us or they will have heard of us but only seen us with huge amplifiers and noisy rock music as opposed to acoustic.

So, it’s a good way to getting over to new people. Plus an awful lot of our songs do deal with our home country which is what you’ll hear when it’s not swallowed beneath the avalanche of distorted guitars.”

Getintothis: Talking about festivals, you guys have definitely played a lot of festivals. Is there any particular festival which is specially memorable?

Andy Cairns: “One of the first big festivals we ever did was in 1992 in Ireland. That was when Iggy Pop was on the bill and that was in a football stadium and that was memorable because Therapy? was a hard core punk band and we were used to playing in small punk venues.

Getintothis: And has the crowd changed over the years in these festivals? Have you seen younger audience coming on?

There has been a bit of 90s revival few years ago. I have an 18 year-old son and his mates are talking about bands like Nirvana and Alice in Chains and stuff like this.

So I would see kids of my son’s generation start to come up to the gig. But then again we have actually been around so long now. We’re getting to the point where quite a few of our fans from back in the day are bringing their kids along too.

To be honest, the hardcore fan base has all grown up with the band so we’ve had people who are the same age as us but there are still new people coming through which is what we want.”

Geintothis: Your old audience, most of them, might have been introduced to you by Troublegum. And now again you’re going to be working Chris Sheldon who was the producer on Troublegum, right?

Getintothis: Does it mean there will be some similarities in the album with Troublegum given it shares the producer?

Andy Cairns: “Absolutely. That’s inevitable. What we were thinking the album sounds is like a 21st century version of the classic Therapy? sound. If you are an old school fan, it will be the Therapy? that you know and love.

But if you are a younger fan, it will be all the songwriting and riff-writing qualities of Therapy? but with a modern production sound. So it should be hopefully a really great representation of where the band is in 2018.”

Terri Hooley’s Teenage Kicks: the story of Good Vibrations and the godfather of Ulster punk

Geintothis: Personally, I am a Joy Division fan and I found your cover of Isolation interesting. Any songs that you haven’t covered but personally think would be interesting to have Therapy? perform?

Andy Cairns: “Yeah we listened to a song just the other day. We all actually like a band called Hawkwind. There was a great song released in 70s by Hawkwind called Magnu. And we just had it playing in the van and me and Michael, the bass player, just looked at each other and went ‘This would sound great as a Therapy? cover’. So, don’t be surprised if you hear a cover of Hawkwind’s Magnu in the future. “

Getintothis: One last question before we leave each other, it’s not so much related with Therapy? but I’d still like your opinion on this. NME is stopping its printed edition.  So what do you feel about that? What do you think it says about music industry in general?

Andy Cairns: “It’s sad to see the magazine go. They put us on the cover four times in 90s. And some of our most important records, they get fantastic reviews.

But it’s like everything else with printed media. People don’t really bother with these big thick high quality magazines on the coffee table anymore, it’s all online. So I’m not really surprised. I mean, to be honest, there’s a tinge of sadness because whenever I was a kid living in the north of Ireland, New Musical Experience – they made their own sound. They were the way I kept in touch with what was been on. Also the John Peel radio show, the Good Vibrations record shop in Belfast. They were how we found our about bands like Joy Division and Nick Cave & The Bad Seeds.

So it is the end of an era but that’s just the way things are going. Most recording studios we worked at are shutting down.