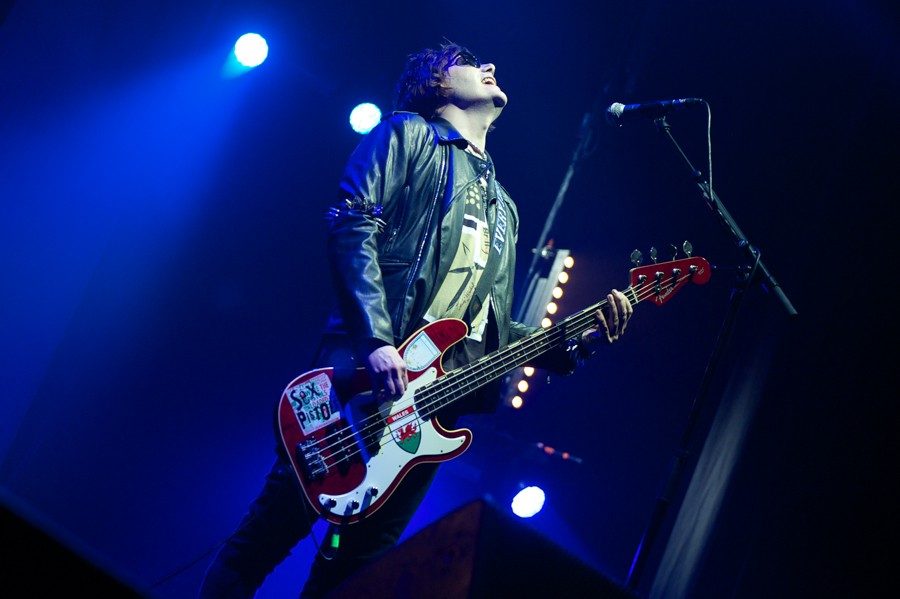 With The Manic Street Preachers being just the latest artists to pen an ode to the place Carl Jung called the “Pool of Life” Getintothis’ Jamie Bowman picks his Top 10 Liverpool songs.

The Manic Street Preachers recent single Liverpool Revisited is just the latest example of the city inspiring a song. Perhaps only London and New York rival Merseyside when it comes to providing the Metropolitan muse for songwriters be they natives or outsiders.

‘Liverpool Revisited’ is about what was just a magical day,” the Manics’ Nicky Wire recently told The Quietus. “It was on the Everything Must Go tour and I got up really early at sunrise to walk around Liverpool, polaroid camera in hand on a balmy day. It sounds clichéd I know, but Liverpool in the sun does take on a hypnotic quality, with the Mersey and the stone.”

One half of probably the greatest single of all time, Penny Lane wins out against its spiritual brother Strawberry Fields Forever due to Paul McCartney’s ability to see the beauty in the ordinary Liverpool street. It’s all there from the bus shelter to the banker and his motor car to the poppy seller “who feels as if she’s in a play”.

It’s easy to mock Wylie’s passion on this record as Julian Cope did on his Liver as Big as Hartlepool riposte but anyone who calls their daughter Mersey means it man.

The song’s become an anthem for the red half of Liverpool which might put some off but this should be a song that the whole city embraces. I remember seeing it once played as a video of the 96 Hillsborough victims ran beneath and was reduced to a sobbing mess. It’s that sort of song.

8. Villiers Terrace – Echo and the Bunnymen

Liverpool’s big skies and stunning sunsets run through all the Bunnymen’s output but on this song they pick up on the grimier side of the city and the kind of places where nothing good happens after 1am.

Allegedly influenced by the warren of streets in Liverpool’s Georgian Quarter which once housed the city’s bohemian community, Ian McCulloch’s assertion that ‘there’s people rolling ’round on the carpet / Mixing up the medicine’ will ring true to many a late night reveller.

You could pick literally any song from Mick Head’s extensive back catalogue, cut it open and find Liverpool running through its veins.

References abound to the city’s various districts from Lark Lane to Clayton Square, but it’s on this epic tale of drug addiction that Head’s tragic life on the streets is laid bare.

It’s always worth remembering that the River Mersey runs through the likes of Stockport and Warrington but this B-side and fan favourite has always struck a chord with Liverpool audiences due to its punning ‘River cool’s where I belong’ chorus. To hear it being bellowed to the rooftops on the dancefloor of indie mecca Liquidation is a life affirming experience.

5. Going Down To Liverpool – The Bangles

A strange one this.

Going Down to Liverpool is a song written by Kimberley Rew for his group Katrina and The Waves, although it is best remembered today due to The Bangles’ janglesome cover released in 1984.

It’s a lovely piece of chiming pop made all the more surreal by the sound of the California girls singing lyrics about signing on with their ‘UB40 in their hands’ and the presence of Leonard Nimoy in the video. Can you imagine meeting Susannah Hoffs down at the dole queue?

Liverpool’s Kardomah Cafe was just off Stanley Street and was a popular haunt for generations of bands from The Beatles to 80s heroes like The Cherry Boys who featured future La’s members John Byrne and Chris Sharrock. This stunning track somehow missed the UK charts but its dreamy psychedelia proved popular in Spain of all places where it was a huge hit.

3. From Speke To Waterloo – Steve Roberts

This lovely piece of lilting Scouse romanticism takes the listener from one end of the city to the other and is full of charming observations along the way. ‘Take a left a bit too soon / But then the river is in view; will be familiar to anyone driving down Aigburth Road as will talk of going to ‘a party on the Lane’..

As former Tambourine Roberts drives back to Sefton you’re willing him along his way and maybe wishing you were in the front seat with him.

A charmingly bonkers tribute to Liverpool’s Le Bateau nightclub that reached #153 on the UK singles chart. I could also have chosen Hey Housebrick – a catchy track all about the M56 motorway and the towns and villages that it weaves past.

Few bands were better placed to comment on the poisoned chalice of Liverpool being named European City of Culture than The Zutons who found themselves the biggest band in the city at the time.

Of course this being Dave McCabe there’s a downside to the accolade that brings paranoia, crime and even murder to its streets. ‘Down in the alley a tramp falls asleep / Murdering the hooker and chops off their feet’ wasn’t a phrase found in Liverpool Council’s promotional material.