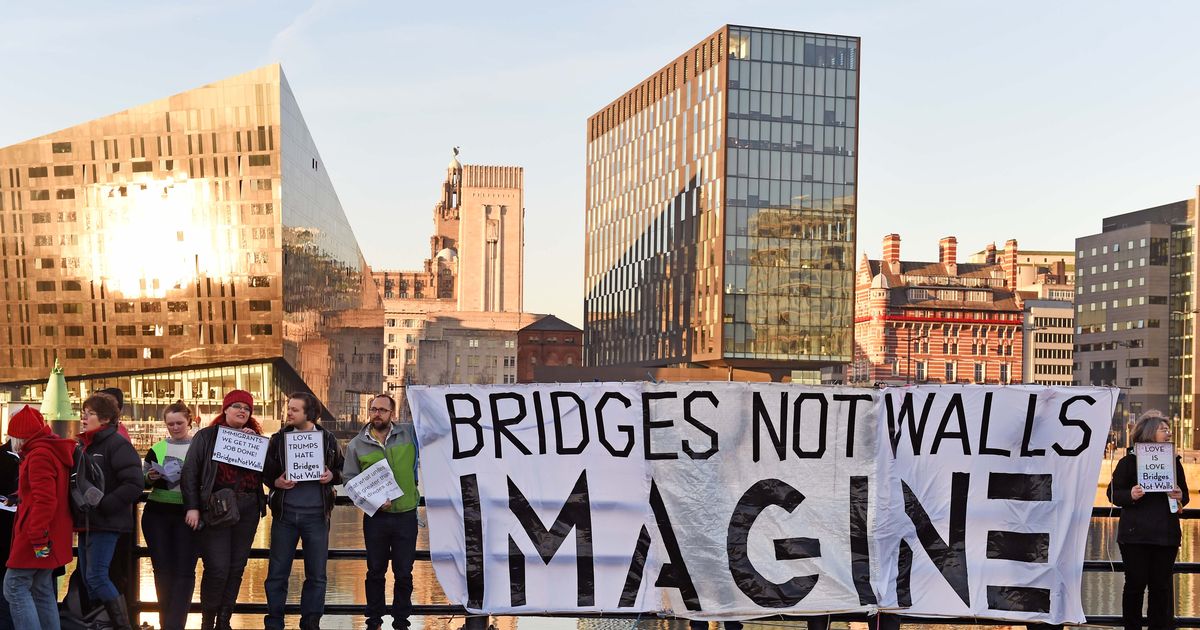 In the run up to Donald Trump’s visit to the UK Getintothis’ Jono Podmore reflects on what the US administration could really be up to, and if the UK are heading in the same direction

‘Did you hear what he said about Venezuela? Did you see the video of those kids in cages? Did you see what was on the back of her jacket? Do you know how much the security for this trip will cost?’

It’s senseless. An unqualified and culturally illiterate boor is careering around the world stage leaving the great, the good, and the honest among us slack-jawed in horror.

The senselessness brings more questions: ‘Why can’t they just get rid of him? How did he get there? What was Putin’s involvement?’

We’re left trawling through an endless logorrhoea of contradictory idiocy about a TV clown, incompetent at every level in his life. Incompetent and crooked in all spheres except for one – a job he’s performing perfectly.

When I was asked to write a response to the 45th US president’s state visit to the UK this month my initial reaction was to decline. There is already just too much written and discussed about this dangerous oaf and his vile dynastic entourage. The reason for this mountain of text is not just the horrified response of civilised people, but a calmly considered and deliberately implemented plan on behalf of the business interests behind him. Our column inches are just what he’s there for.

The resignations and sackings in the US government are occurring at such a high rate we don’t really know who the administration IS anymore. The idiotic rants based on little more than ‘look at me, aren’t I great’ are all reported and dissected in detail. The accusations of fake news as the go-to retort to criticism put us in the position of analysing the news to check for veracity, and by then he is on to the next witless outrage.

There is a reason for this. He’s a conman. A showman. That’s his job.

The Fake News is working overtime. Just reported that, despite the tremendous success we are having with the economy & all things else, 91% of the Network News about me is negative (Fake). Why do we work so hard in working with the media when it is corrupt? Take away credentials?

He’s been put in place by international business interests to distract and confuse us. Using our response to his bluster and idiocy as cover they are destroying the social structures created to protect the population. Destroying these structures in order to magnify the short term profits of their shareholders.

Noam Chomsky puts this aspect of the current jeopardy we face across clearly in his interview from March 2018. In it he says: “…they are doing it eyes open because they make more profit tomorrow.”

And that’s the most astonishing part. These people would motivate and utilise the darkest forces of fascism and abuse in society, would bring about the end of civilisation in order for increased profits in the short term. Or to save their own necks from the people they promised an endless increase of profits to. Which is where the current incumbent fits.

For example, he ran casinos in Atlantic City – and ran them into the ground. This would not be possible without close links with organised crime. The inexorable crawl to the top, the desperation to do the bidding of even bigger, more brutal players, is a scramble to safety.

Creating a spectacular shambles to cover up for other dark interests is not just a strategy confined to the US. The calamitous road to Brexit (news just in?) is creating a bonanza for the gamblers on the stock exchange. For example, vicious social vandals like Rees-Mogg will personally profit to the tune of millions whatever the outcome of Brexit because his hedgers and brokers are betting both ways.

So that is where we have to start: at home. Using everything at our disposal to get the current Tory administration out of power. There will be a general election before March 2019, I’m sure of it. Another circus of tainted democracy with votes bought and paid for by offshore interests. But it is democracy nonetheless and a chance for us to remove the Tory party and their psychopathic neo-liberal paymasters from power.

Theresa May and her cohorts are dancing to the same tune as the US Republicans.