Liverpool’s thriving jazz scene is alive and well, Getintothis’ Jonathan Butters gives us the low down on Parrjazz and what’s in store in the coming weeks.

“I don’t like jazz, but I liked that!” How many times have I heard that?

Several gigs every night of the week make jazz, in all its forms, a booming part of Liverpool’s music scene. And as we write, several new regular nights have just been announced.

For 10 years Liverpool’s Parrjazz has promoted top international players: Snarky Puppy, FORQ, Gogo Penguin, Alan Barnes, Dennis Rollins and loads more. Parrjazz has introduced and supported new players as well as developing venues: Studio2, On Air, Ma Boyles and Frederiks. Parrjazz, led by musicians, is non-profit and supports new talent, from the LIPA guys to those making the move from rock, pop and soul to walking on the Jazz-side!

June was kicked off into a dark gothic castle by Liverpool’s own Blind Monk Trio cascading their Black Sabbath/Stranglers/Coltrane compote into the laps of regulars at Ma Boyle’s Alehouse and Eatery; local vicar sat outside smoking a cigar and sipping a single malt.

Parrjazz and the Liverpool jazz scene: a tour around the best on offer

June saw Parrjazz returning every Tuesday to Studio 2 Parr Street after a brief spell on Hope Street, saying farewell to Frederiks with a monster night featuring the LIPA Big Band. Studio 2 was designed as a recording studio, the best live sound in the city. You’ll also find Jazz at On Air every other Thursday and Ma Boyles every Saturday.

The line-up for the rest of June in Studio2 was a total blast bringing in San Francisco’s Paul McCandless with Charged Particles, closing off with a packed house for USA’s finest Prog/Fusion outfit, FORQ, touring their latest record Thrēq. FORQ’s storming acid-jazz rocker Cowabunghole created a rare sight, a jazz mosh pit.

In July Nashville’s Suzahn Fiering gave us a master class in songwriting and we finished with the hard-hitting tenor sax of Cream classics/Angry Men/Ginger Tunes’ very own Mike Smith.

As August broke, Barry’s Boptet smashed out the best of Be Bop – Herdsmen to Miles Davis. Sax legend Dean Masser carried on the theme before we were blown away by a new ensemble, The Deportees, originating from UK, USA, Iran and Spain. 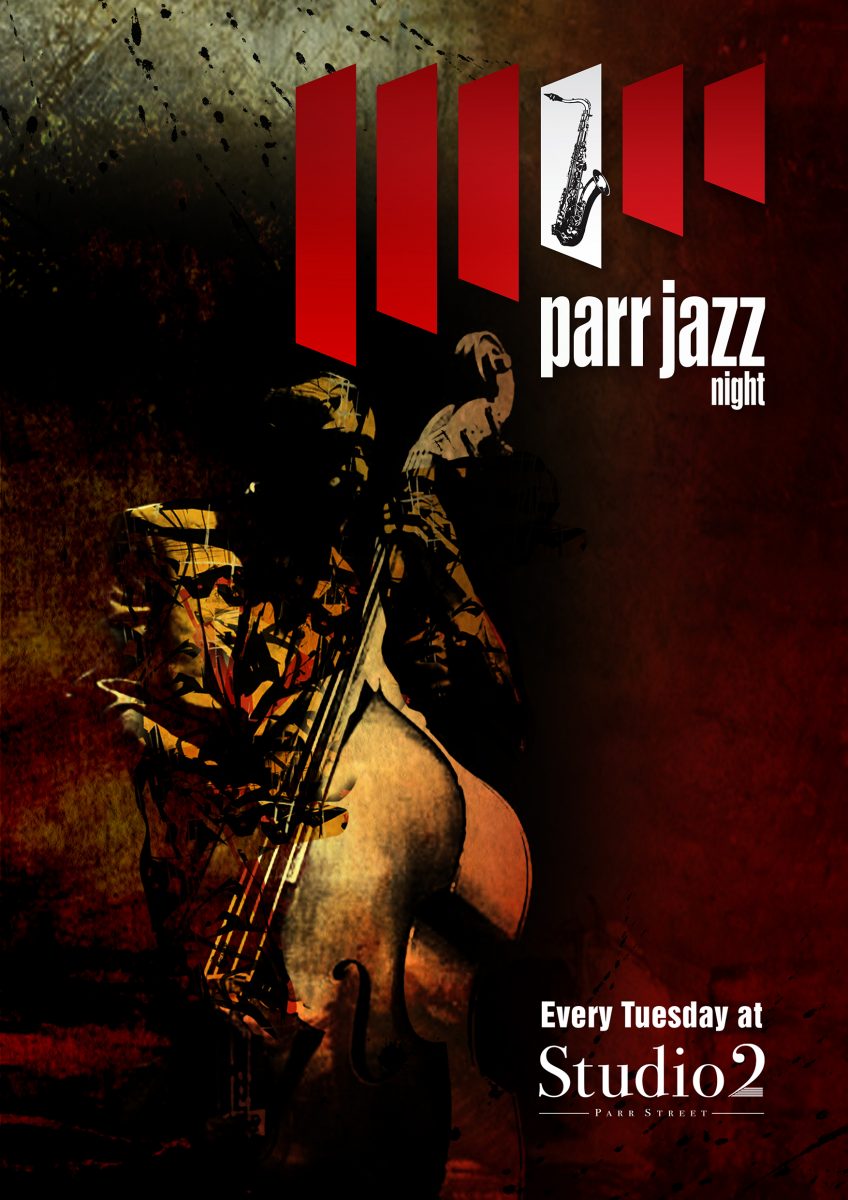 Glaswegian trumpet legend Bruce Adams drove Parrjazz’s house band in September, followed by Yorkshire multi-hornist Danny Hammerton and Guitar/Hammond/Drums combo Tobie Carpenter Organ Trio, touring their debut EP Dead Pan Party. Did I mention the jam session? Many of the guest players stick around for the jam so new players get a chance to improvise with the best.

October is a jazz-feast. Already, Brigitte Beraha and her ensemble Babelfish has chilled us into a happy place, Bristopian toe-tapping jazz-trippers Get The Blessing rocked-out to a packed house and we have Robert Mitchell’s Epiphany 3 on 16th, Cinematic Orchestra and The Breath guitarist Stuart McCallum on 23rd, topped off with the insane Baked A La Ska Halloween Special on the 30th.

November will feature two sax heavyweights – Benn Clatworthy and Greg Abate, with much more to come. 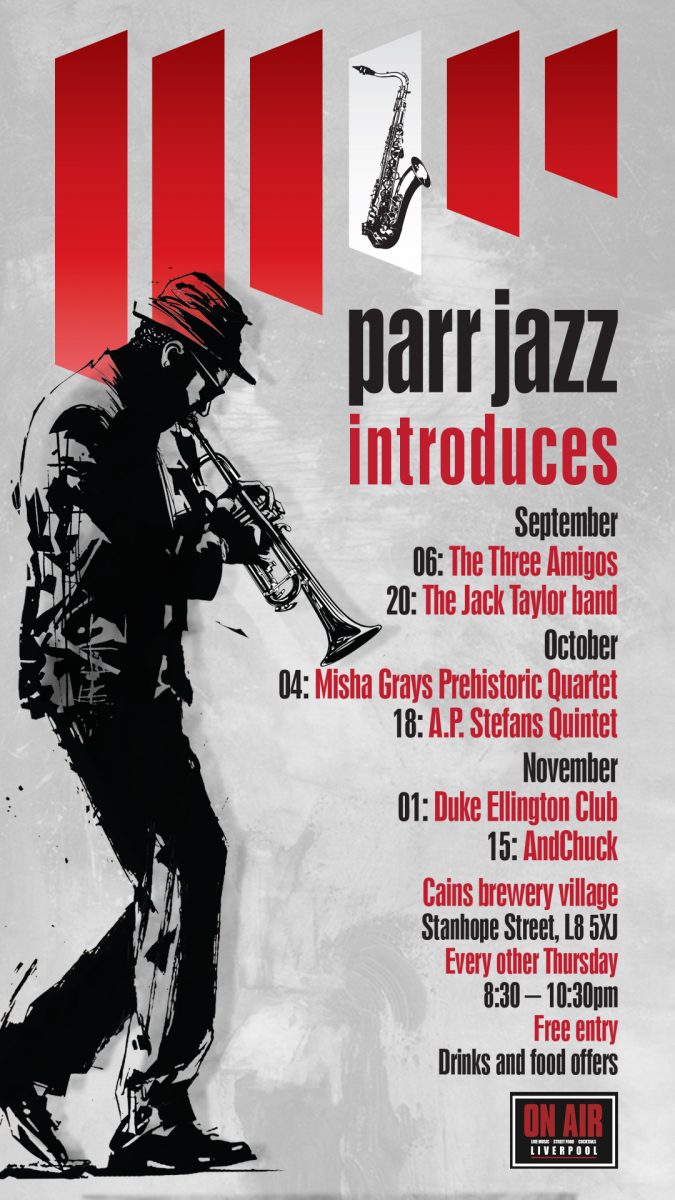 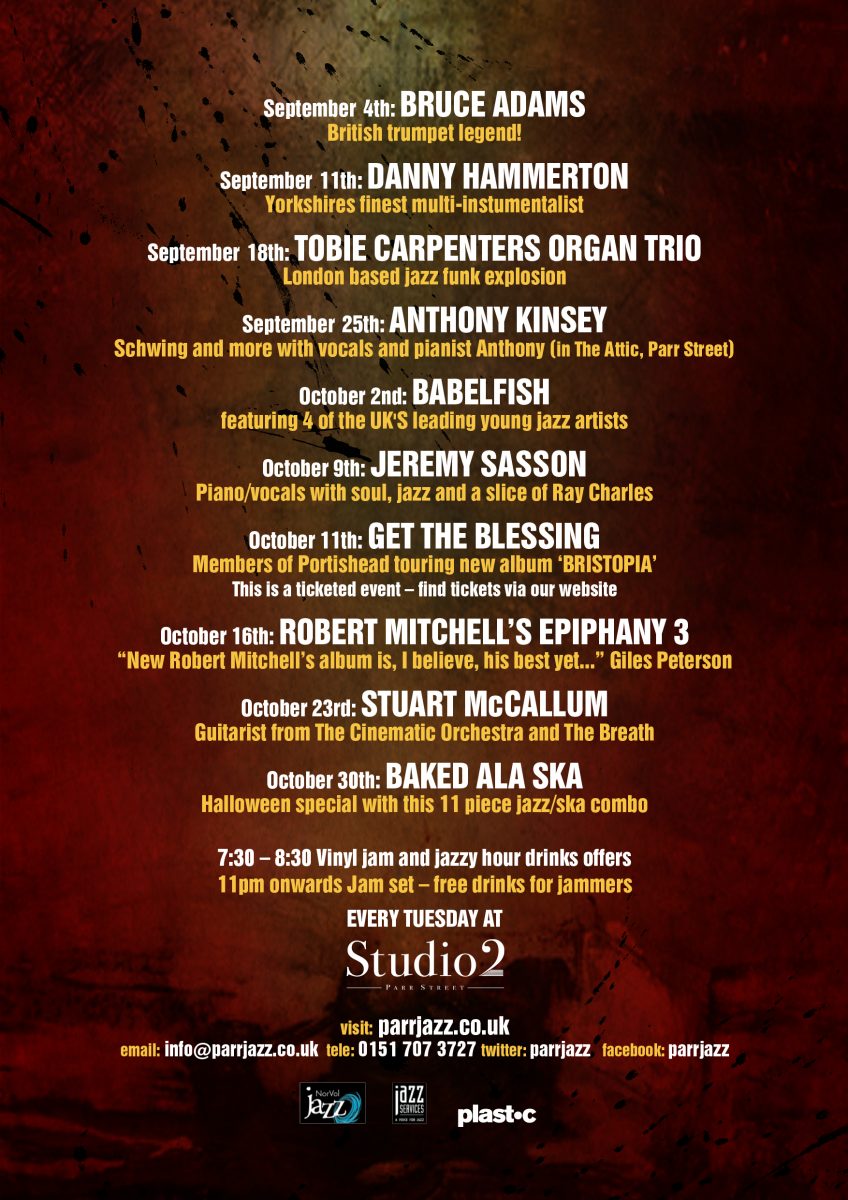