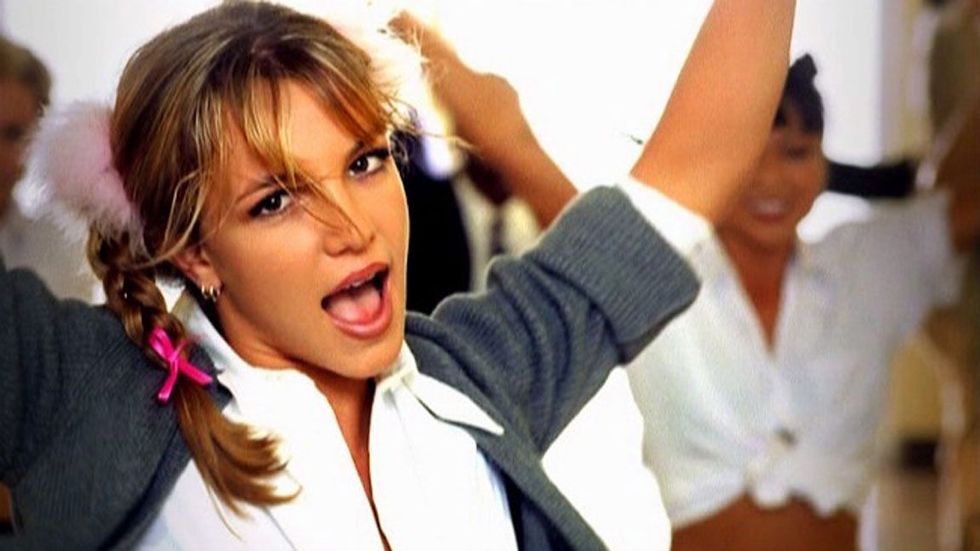 Britney Spears was always an old head on young shoulders.

As a child, she knew that if you lost a talent show you had to give the winner a gigantic hug. She knew that you had to ditch Louisiana and move to New York, leaving all your high friend schools in the dust. She knew you had to perform in around eighteen thousand shopping malls before anyone would bother to remember your name.

So by the time we even noticed this teen dream in frosted lipstick she was already an old hand, ready to weather the storm of public censure and adoration that her first song was about to unleash.

Hit Me Baby One More Time itself needs no introduction. Recorded in Stockholm with Max Martin, like all of the best pop songs of its day, it sounds as though it’s been cobbled together from the remains of Herbie Critchlow’s Clap Your Hands. It’s a sucker punch of a song and Britney knew it was a hit the second she heard it.

As for me – I also knew it was a hit before I heard it. They’d devoted a page to the advert in Smash Hits, and since it was released that same day, I decided to take a risk and buy it blind.

The single came with multimedia extras, so I could fast become acquainted with the pink-bobbled pigtails, the locker-room dance routine, the experience of stalking boys in deserted bleachers. I felt irritated when girls in the playground referred to the song as ‘Oh Baby Baby’ (as if that suggestive ellipsis meant nothing!) and was stunned to the core when I read in a magazine that she didn’t eat bread.

But for the most part Britney’s entire aesthetic tuned into an obsession with ‘America’ that I shared with every other child in the 90s. American high schools were like this, populated by athletic girls in crop tops and pubescents behind the wheels of sports cars, basking in the afternoon sun.

Something in the song, however, had this weird melancholy that didn’t totally sync with the teen shows I’d been devouring on channel 4.

The strange grumpy piano line, and the guttural vocal that sounded so intimate but also seemed disembodied, like somebody rasping down a phone at you. What is with that rasping down a phone? Is Britney ringing up some other blonde girl in a lilac bedroom, surrounded by Beanie Babies as she clasps the receiver to her ear to soak up the gossip?

Or is she dialling the number of the quarterback who dumped her, breathing down the line when his mother answers, before quickly hanging up again? How close was Britney’s loneliness to actually ‘killing’ her? Was she the most popular girl in the school, surrounded by admirers, or a coquette in a school uniform expertly pandering towards those basic kind of men who believe that women come in two types: Blonde or Brunette, Good or Naughty, Angel or Whore? The answer itself wasn’t important, it just had to be ambiguous.

To keep that ambiguity in check, Britney was always having to do damage control. Every interview at that time seemed to require fending off intrusive questions with a soft Southern giggle, and invariably ending up the focus of a comment piece about how depraved she was or how exploited. For having a midriff she was worshipped and chastised in equal measure, and there always seemed to be an underlying suspicion that she wasn’t a person at all, but some proxy dreamt up in a lab to spring fear into the parents of teenage girls everywhere. Her robotic approach to publicity did little to refute this.

In Defence of Madonna

Britney’s studied innocence was ingrained, even before the pantomime of her virginity and Justin Timberlake. While other girls her age were working up the courage for their first Saturday job, she was already a showbiz veteran, armed with a handbook of maxims ready to fend off journalists: ‘All schoolgirls tie their shirts up when it’s hot.’ she said, and  ‘It means hit me with your love.’

In the 90s, everything that became popular or widespread also became a question of morality, and if it became a question of morality, it was permitted endless coverage. If Britney had been limited to the role of a churchgoing adolescent with a good gym routine, she wouldn’t have lasted ten minutes. She needed to merge the sweat-slicked hair and chair straddling with the small-town charm, all the while telling anybody who would listen how ‘goofy’ she was. She could have a double bed covered in rose petals in her videos, but that was no bother because it would turn out to be just the setting for a big silly pillow fight.

She quickly became the blueprint for a whole squadron of ventriloquised pop stars filling the charts with throaty bubble-gum hits and twelve-man dance routines. Christina was a solid rival, if the icy professionalism made her less of a girl-next-door, Jessica Simpson’s Christian schtick is too boring to write about, and Mandy Moore, for all the milkshake and candy metaphors, parroted lyrics that were just the wrong side of raunchy. She didn’t have the delicate balancing act that was key to Britney’s success. The trick is not to get a teenager warbling ‘It’s my innocence that makes you yearn for that perfect present you can’t return’ but to follow up a ‘racy’ schoolgirl act with a ballad like Sometimes, in which that same schoolgirl dresses all in white and bashfully apologises for being so shy.

Strangely, the album which followed isn’t nearly as provocative as its lead single. It’s a record almost exclusively about pining after boys and making promises to boys, but not in an eyelash-batting Lolita kind of way. No, the album One More Time is as banal as a two piece locket. It dots its i’s with hearts and loops its t’s. It definitely sits in its lilac bedroom making lists of its best friends and crushes in a butterfly-embossed journal. One dirge, Email My Heart, grovels to a boy who is deliberately ignoring her messages on AOL, Born to Make You Happy begs an ex-boyfriend to change his mind, and From the Bottom of My Broken Heart is a dowdier rendition on the same theme. The album is just a slosh of mid-tempo ballads with sodden piano chords, a stab at a house anthem, a bit of windswept guitar pop.

But you can’t ever take Britney at face value. That’s her whole thing. Her entire career is predicated on keeping her audience guessing. While the sniggers and snarky editorials of 2007 threatened to finish her, somehow they didn’t, and she was still releasing material as recently as 2016. I didn’t follow her that far down the road, so if she had a dazzling musical renaissance I know nothing about it.

Either way, Hit Me Baby One More Time left a crater in pop. It was the best exercise in mythmaking that side of Instagram, and twenty years on its appeal is as solid as it ever was. Britney goes on. She is immortal. There’s a part of her who will always be a thirst trap for creepy old men. No, wait, a sweet Southern belle in a turtleneck. No wait, a goofball. No wait, a strong, powerful entrepreneur fully in control of her own sexuality.  I don’t know what she is.  She’s Britney.