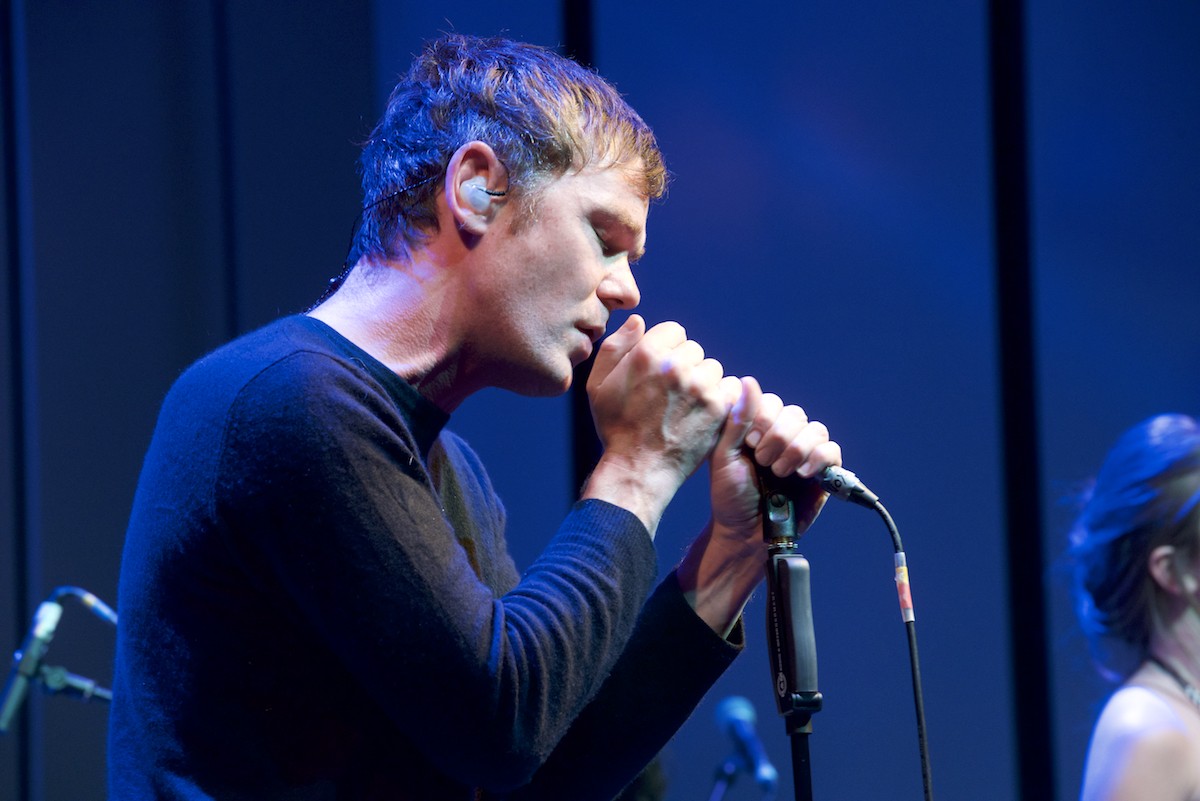 On the 20th anniversary of debut album Hope Is Important Getintothis’ Howard Doupé gives a passionate plea for one of Scotland’s finest.

Idlewild are a tricky band to box in. Arriving in a post-Britpop world, where it felt the underdogs of the alternative scene had little chance of any exposure without the likes of Steve Lamacq’s Radio One Evening Session show and help from homegrown labels such as Fierce Panda, Rough Trade and Heavenly Recordings.

Out of the burgeoning music scene came Idlewild. Formed in 1995 and named after a quiet meeting place in Lucy Maud Montgomery’s 1908 novel Anne of Green Gables these four young Scotsmen delivered their debut EP in 1998. Captain followed on from a couple of 7” only releases and quickly grabbed attention in the music press. The reviews were positive although the defining quote at the time described their sound as ‘a flight of stairs falling down a flight of stairs.’ A better description of a band I dare anyone to quote!

Once the teenage spunk had calmed down it didn’t take long for well-crafted musicianship and melodic content to dominate the output. From early on the buzzsaw of Rod Jones’ guitar lines offered a unique complimentary sound to Roddy Woomble’s introspective lyrics. Here is a lyricist whose trademark was to discover deeper into what was plausible within this genre. Based in his love of the literary world the unique content or perspectives offered up consistently continued to challenge and demand attention. With many reference points to decipher those lyric sleeve notes have long served as a door into what was for many, an unexplored world.

It’s a song writing angle that has far more disciples these days. Back in 2000 Idlewild seemed the only band on the landscape daring to shine a torch.

What other band would mention Gertrude Stein, invite Edwin Morgan one of Scotland’s foremost poets of the 20th century to read a poem on the album closer of 2002’s The Remote Part or simply note on the inside cover of said album, ‘support your local poet’.

Over the years there has been the odd longstanding member changes but it’s the core of Woomble, Jones and drummer Colin Newton that keep the sound familiar yet interesting. Every one of their albums delivers without fail a curveball that serves to push that rigid definition of what a guitar band can do e.g. I’m Happy To Be Here Tonight from Hope Is Important, 100 Broken Window’s Bronze Medal or All Things Different from Everything Ever Written.

A career already spanning 21 years comprising of two ‘greatest hits/best of’ collections, a B-sides collection, a couple of live albums and seven studio albums (their eighth due in 2019), Idlewild continue to offer something new and relevant. There are lessons to be learnt from their not so distant history and a companionship worth following hand in hand with your own life journey.

With no further ado then, here’s 10 of their finest nuggets- and why each one of them will find the remote part of your heart.

What do you do when your record label folds? Go deliver a belter on yer own and direct to your fanbase! Complete with fanfares from brass bands, xylophones on the main riff and those Scottish-tinged chiming guitar lines.

The album it’s lifted from served to showcase a wider breadth of influences, inspired by Woomble’s digestion of American literature. Only two years after their previous offering, here’s a band once again convincingly singing to their own tune and loving it.

9. Collect Yourself from Everything Ever Written (2015)

This track had been a long time coming. Seemingly lost, a succession of solo releases from numerous members, establishing themselves in their own right. This only served to hint towards Idlewild’s possible place in the wilderness of the Scottish-band graveyard. However, the six-year absence was shattered by a Facebook reunion photo and subsequently this slice of classic Idlewild.

The familiar vocal partnership of Woomble and Jones is there. When the riff arrives, it’s menacing. What’s changed over the passing years is a maturity of sound. Developing individual characteristics on other projects has been rewarding. This track has depth and soul. ‘Young, but only for a moment in time, moment in time’ offers Woomble There’s glory in that story right there.

By the time the set of songs this is lifted from landed, Idlewild were certainly riding their wave high. They’d enjoyed their highest chart placement (No.3 on the UK chart) with The Remote Part and played their biggest shows to date on a US tour with Pearl Jam.

Originally a B-side to Love Steals Us From Loneliness and rescued on this compilation, the sense of jubilation can be heard all over this track. The riffs are jubilant, arms are aloft and Woomble’s never sounded to believable. There’s sweeping guitar lines, singalong chorus, haunting backing vocals and determined drums. All wrapped up in less than three minutes. What more do you want?

7. In Competition For The Worst Time from Make Another World (2007)

Lifted from their first album post-Parlophone deal, lack of label pressures is evident. Their first album recorded with the new sense of freedom however, seemed to arrive out of sync with the musical landscape. It was only warmly received, Woomble commenting at the time that the band had ‘made a conscious decision to make a strong, loud, rock record.’

It’s a bold statement and possibly one for only the die-hard fans. Nevertheless, there are some corkers. The first single If It Takes You Home is Idlewild at their ear-splitting heaviest, although it’s the opener that mentions bleeding.

In Competition… is the best two-chorded riff you’ll hear since America’s A Horse With No Name. However, if Idlewild were once venturing down an Americana route here’s the detour back to their routes. There’s punchiness not seen since their embryonic live shows of screaming down the mic while rolling on the floor antics. Here, the song is expertly crafted, balanced and leaves you wishing the solo went on for another five minutes.

If you want a soundscape to overthrow, a blot to blow you off your emotional pedestal then here’s Idlewild’s moment. A bold statement ‘Everything’s always changing and nothing stays in the same place for too long. I’ve been too long awake.’

The pace is steady, the guitars drenched in reverb and delay, the beauty is perfectly personified through that unique blend of thought-provoking lyrics – that take over a minute before making an entrance – and music to wrap you up tight.

The cleverness of this tune is only fully realised when you hear its reprise in the coveted ‘hidden track’ slot, not to mention the numerous acoustic versions floating around the net. The chorus itself finds Woomble at his most spiritual and mystically cryptic, ‘Together, we’re younger than you are. Forever you’re older than we are together, If we had so much to do.’

We’re getting to the hardcore fan-favourites now. Their first real stab at chart success came in the form of the forth single from their second long player. It could have been the first and in a world where marketing strategies were structured with intent, it would have been.

A crowd pleaser, mosh pit-inciting track- encouraged by the accompanying MTV ready video no doubt- it takes no prisoners. This is exactly why our ears pricked up in the first place. Roseability reminds us of their roots, at a time in their early career where gaining popularity and shifting units must have taken president.

Full of youthful energy, it’s a fireball in the cannon and one that never tires.

From its release right up to their current live shows In Remote… is often the final track played. What a beast it is an’ all. The combination of Scottish pride and tenderly yearning acoustic guitars that makes this track so likeable. It’s Woomble in story mode, ‘we stop in every passing place to watch the world move faster than we do.’

It’s an ode to the very real issues facing those who care. Their exploration through song only leads to a desire for further empathy. ‘And even if the breath between us smells of alcohol, we call it confusion in the best way possible.’

Oh yeah, it’s Idlewild of course, the distorted guitar-bomb drops just as you thought the track was gently rocking you to sleep. Capped off with some exquisite poetry by Edwin Morgan to see the song out.

Finding highlights from their debut is easy, yet it’s the big tunes that draw the largest smile when you take a trip down the listening memory lane. Right from the off the lyrics have you gripped, ‘I’m not really sure of all this pressure, I’m never gonna lose any of my old letters.’

The music fits perfectly, loud drums, building guitar riffs and choppy changes. It’s a love song, cloaked in frustration and a sincere honesty, ‘I laugh at your conversational skills, or lack of.’

By the time the lyrical sparring comes in at the songs breakdown, it’s a musical kaleidoscope of sound. Harmonics ping around whilst Bob Fairfoull’s bass keeps the melody light and intact. It’s a fine piece of indie-rock that quite rightly gave them their highest charting single.

However hard you try to fight it, your own personal entry-point for a band remains key. This was the first Idlewild track I ever heard on the radio. I’m pretty sure I was driving my first set of wheels, a battered old Fiesta and was just floored by the starkness of the lyrics. Never had I heard an opening line like it, ‘the sea is never calm, it always blows and knows it too.’

Recovering from bloated rock star silliness of 1997, it was early 1998 when a trip to HMV on Church St had one purpose – to get hold of the 7”. They were extremely limited, yet they had two copies. Mines number 0707- it’s my own personal White Album ownership moment. God knows why I only bought one. Must have needed the 99p for the petrol home. 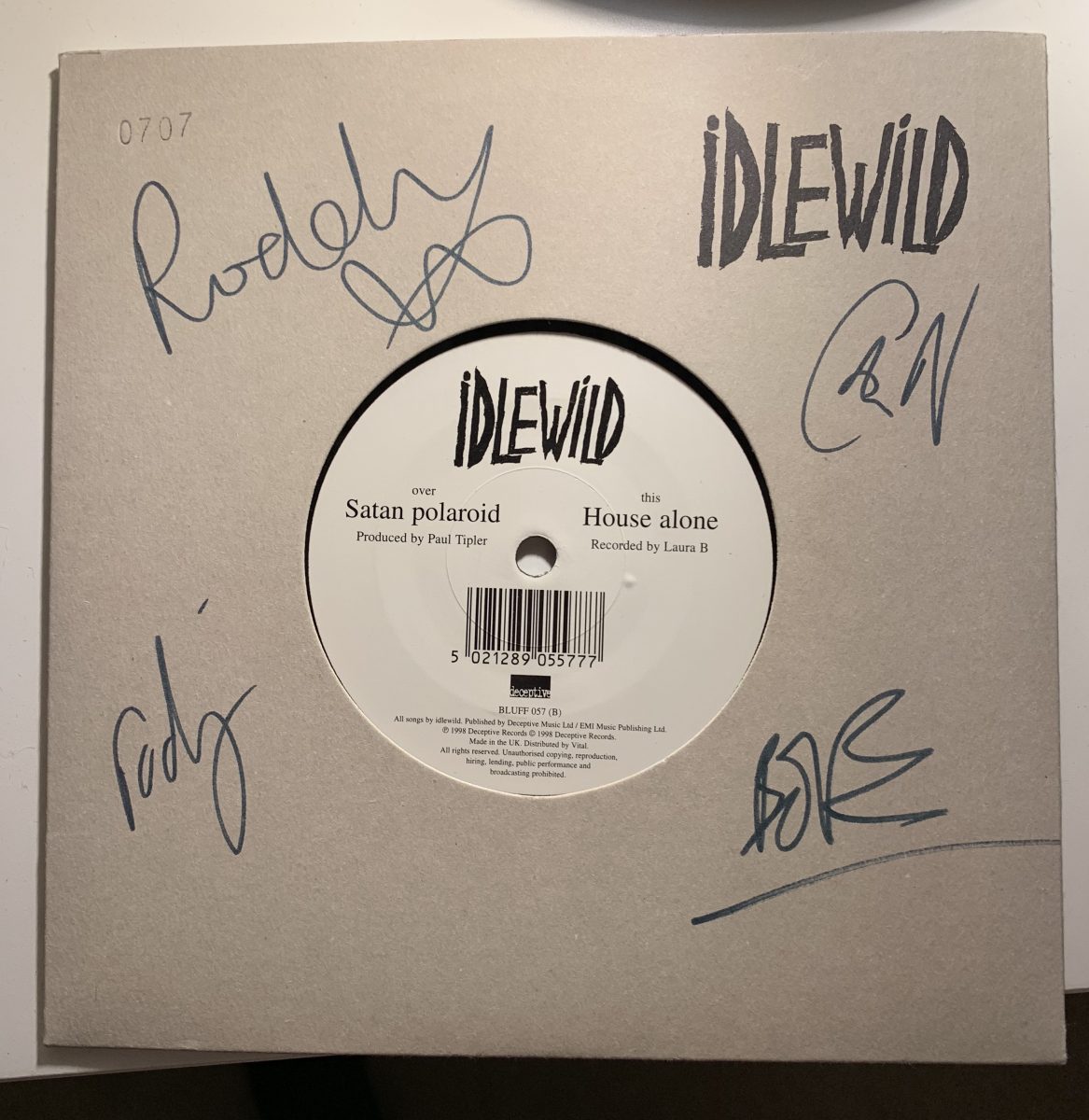 Still gives me goose bumps now. If I ever meet Mr Lamacq, he’ll get a pat on the back for this one.

Probably no surprise it’s their bid for international stardom topping the list. Featuring on their most commercially successful album to date, the ‘big hit’ made the top 20, but ultimately brought the band to a much wider audience both at home and abroad.

I first heard it as a poorly bootlegged live demo (anyone remember Audiogalaxy?) when it was mis-titled The Weak Spot. The slower tempo compared to the final released version displayed a fragility that only stirred excitement for hearing the recorded effort. Yes, it’s often cited as being over-produced, too radio-friendly and certainly not their best. I’d argue differently. The melody’s superb and Woomble gets you again, ‘Songs, when they’re true are all dedicated to you, in this invisible world I choose to live in.’ He’s frank, open, a spill of conscious thought offering a glimpse into a way of seeing the world.